Advantages and Disadvantages of Eating Seafood

Advantages and Disadvantages of Seafood: Seafood is majorly consumed around the world due to its high-nutrients and health benefits. In some countries, people prefer consuming it raw; why not? It’s an excellent alternative to Red Meat. Where the world is busy enjoying sea-urchins, oysters, crabs, and salmon, there are indeed some facts about seafood that must be considered. Find out more about the Advantages and Disadvantages of Seafood that tastes better and holds more nutritional value than its counterparts.

What are the Advantages of Seafood?

One of the prominent reasons why consumers eat seafood is the number of vital nutrients and vitamins that seafood holds. Some other facts contribute to its value which are worth mentioning to seafood-lovers.

1. Seafood is loaded with Vital Nutrients

A regular-size oyster contains approximately 7 grams protein, 80% Vitamin D, B1, B3, and B12, with the least amount of fats accounting for just 3%. Oysters top the list of healthiest seafood accompanied by Shrimp, Salmon, and trout. These fishes have the same nutrients in a different proportion all of which are considered immunity booster.

The food that is rare and full of vital elements is always good for business growth. This why seafood business is also a deal to invest in many restaurants and fishermen from around the world. According to a report published in 2019, the US alone had about 3 Billion USD turnover employing about 15, 426 people totaling to 4553 businesses.

If you are worried about tasting meat because of a weakened heart, it’s time to let go of your fears. Researchers have found that seafood promotes heart-health and protects you against coronary heart diseases with the least risk of heart stroke. Omega-3 (Fatty acids) also strengthens the immune system and keeps your brain functioning.

Omega-3 fatty acids are known to treat and prevent depression as per the latest research. Also, seafood is also a healthy recommendation for women expecting babies. Supportive shreds of evidence suggest that intake of fish is the elementary requirement for fetal growth and child development. Fats obtained from seafood also reduce the risk of pre-term delivery and intrauterine growth retardation.

What are the Disadvantages of Seafood?

Besides, blatant benefits, seafood also has a bad reputation in several places.

Food is tastier and safer when cooked at adequate temperatures and hygienically. Seawater is a habitat of viruses, bacteria, and parasites that is even dangerous to aquatic life. Inhabited by both macro and micro-organisms, oceans have depths that are yet to be discovered. The unknown parasites get attached to seafood that directly poses a threat to humans as well. Parasites-infested seafood leads to Anisakiasis (Herring worm disease) that is a deadly disease caused by a worm (Anisakid nematodes) latched onto the host’s stomach. This worm can only be removed with a special net. This disease is majorly prevalent in western countries. A herring worm attaches itself to the walls of the esophagus, small intestines, or stomach.

You must have come across some seafood poisoning cases in recent times. If not yet, then it is time to beware of the dangers of some marine creatures like Pufferfish and Shellfish that can paralyze you or even can cause your heart to stop. Another reason for seafood turning against you is because of toxins already existing in water bodies. Developing countries like Vietnam mainly have either contaminated or polluted water that may be safe for marine life but is still hazardous for humans. A cautious note to consumers; never consume undercooked or raw seafood.

3. Seafood is also high in Mercury

With high mercury content, seafood is considered unsafe for expecting and nursing mothers. Consumption of seafood laden with mercury can hinder the neurological development among kids which may show up detrimental effects during the age of 10-14 years. Mercury is a heavy metal that deposits into the water bodies either due to the result of human activities or natural processes. According to the US Environmental Protection Agency, around 50 to 75 percent of the yearly mercury inputs are anthropogenic affecting marine mammals widely. Consumption of marine animals is the major route of human exposure to mercury contents.

The world was struck surprisingly by an unknown virus traveling to almost every country and claiming thousands of human lives. The first case of Coronavirus or Covid-19 was first found in China where seafood consumption is highest. Researchers had deduced the fact that this epidemic was caused by seafood. Common signs of infection include respiratory symptoms, fever, Cough, breath-shortening, and breathing difficulties. Worst case scenario, this virus may lead to pneumonia, severe acute respiratory syndrome, kidney failure, and even death. Read full details on Covid-19 here. 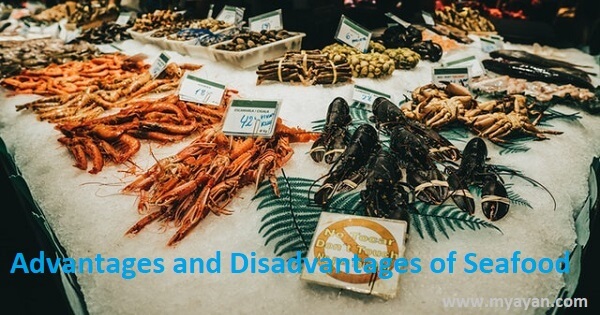 What are the benefits of eating fish?

What are the risks of eating seafood?

Is raw seafood safe to eat?

It's always recommended to cook seafood thoroughly and minimize the risk of foodborne diseases. However, if you choose to eat raw fish anyway, one rule of thumb is to eat fish that has been previously frozen or sterilized. Some species of fish can contain parasites, and freezing will kill any parasites that may be present.

Why is Pufferfish Dangerous?

Pufferfish contains Tetrodotoxin, a deadly toxin, 1200 times more poisonous than cyanide. The poison in one pufferfish can be deadly to 30 humans. There is no known antidote to Tetrodotoxin. Fugu, another species of fish that contains the same toxin is eatable in some restaurants in Japan. Fugu is served in some restaurants strictly controlled by law in Japan and several other countries, and only chefs who have qualified after three or more years of rigorous training are allowed to prepare it.