Pros and Cons of Trump 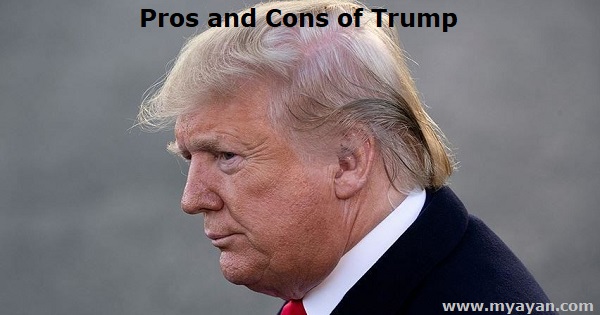 Donald J Trump was the President-elect of the United States. He was sworn into office on January 20, 2017, after replacing Barack Obama. Trump had stated that his presidential role models are Andrew Jackson, Ronald Reagan, Theodore Roosevelt, and Franklin D. Roosevelt. It’s only after the poor administration of Joe Biden that pushed the media to think of what good Trump did as compared to the current POTUS. So, here are some of the Pros and Cons of Trump Administration to help you decide.

There has not been a US president with such an illustrious history. Donald J Trump, a successful real-Estate Developer, and a Businessman became the 45th president of the United States (USA) and was praised and condemned for his acts.

To be clear, the 'best' thing he did was to provide an enormous tax cut to the super-rich. He increased the deficit for ten years to come, demonstrating that the Republicans are unconcerned with deficits. The Republican Party discarded all integrity, good manners, and fundamental values solely for this avarice.

What are the Pros of Trump?

Donald Trump has an analytical mind that can take a large amount of information and put it together to form a conclusion. He is not afraid to speak his opinion. He's spent his whole life making deals and fighting for what he believes in.

Trump loves talking about himself. He's described as confident, which makes him seem like he has the ability to be a great leader. To some people, this is one of his best qualities.

He's promised to deport millions of immigrants, build a wall between Mexico and the United States, stop Muslims from entering America, dismantle Obamacare, crush ISIS, etc. He has already begun to achieve at least one of these targets. It is encouraging that he can maintain his promises. Ultimately, his goal was to put the Americans first.

Trump was not supposed to win this election. However, he overcame all obstacles through sheer force of public support or anti-establishment message. His victory shows that popularity does matter more than most people think it does.

4. True Patriotism is one of many Pros of Trump Presidency

His words were clear and direct, appealing to the aspirations and concerns of all races, religions, and colors. He recognized that Washington had robbed the middle of America of power, capital, and employment, taking steps to restore it.

Trump has a lot of experience in business, which could come in handy when he'd been running the country. He also said that he wanted to make America great again by creating more jobs and boosting the economy.

What are the Cons of Trump?

There are different cons to Donald Trump being president. He'll be the commander in chief and have a powerful say over our country's military, but he admits not knowing much about foreign policy. He advocated for the repeal of Obamacare but offered no plan for coverage. He has stated that he wants to build a 2000 mile wall along Mexico's border with America - our neighbor and one of our largest trading partners.

Trump has no political experience whatsoever, leading many experts to believe he wasn't a good fit to run as president. One of the prominent cons of Trump Administration was a particular group of people never admitted that he could be as good as the former presidents of the US.

Trump has made a lot of controversial statements throughout his campaign, and some people are worried that he may not be capable of leading the country in a respectful and tolerant way. In addition, everyone remembers the adult movie actress who allegedly had an affair with the Former President.

3. Racism and Sexism were major Cons of Trump Administration

Trump has been accused of racism and sexism on numerous occasions, and some people are concerned that he may not be respectful of all Americans if he becomes president.

There is a concern that Trump's business interests may conflict with his role as president and put his own interests before those of the American people.

At first, there was a chance that Trump could be impeached if he did not live up to the expectations of the American people. This means that he could be removed from office if he has done something wrong. Ultimately, he was prosecuted after losing the elections.

Final Comments on Pros and Cons of Trump

Overall, it is still too early to tell what kind of president Trump was provided that his successor has followed more peculiar steps being in power for about a year. Only time will tell whether he was successful or not. However, some people are cautiously optimistic about his presidency, and others blame him for bringing negative impacts on America and the world.

How Many Times has Trump Run for President?

Trump has run for president twice before his 2016 presidential candidacy. He first declared he would seek the Republican nomination in 2000 but withdrew before the primaries began. Then he said he'd run as an independent candidate in 2012 but then decided not to again.

How did Trump become rich?

Trump's money is made up of various sources, including bequests, loans, and inheritance from his father, Fred Trump; trust funds; suspected fraudulent arrangements; fundraising efforts; and business transactions and investments.

Is Donald Trump a billionaire?

Where did Donald Trump go to college?

At 13, he went to the New York Military Academy, a private boarding school, where he stayed until 1964. He moved on to Fordham University two years later and graduated with a B.S. in economics in May 1968.