Virtual Private Network (VPN) Services are widely in use for gaming and online streaming. A VPN is probably the safest way to slip through many restrictions and stay safe online. Besides the benefit, there are certain limitations of using a VPN service as well. The Advantages and Disadvantages of VPN highlight shed some light on facts. Before you use one, you must know the pros and cons of VPN services and apps.

What Is a VPN (Virtual Private Network)?

A VPN is an online service that lets you access the restricted sites and censored content on the internet. Many countries have banned access of other nations to their content either due to security reasons or censorship.

Usually, governments and organizations put these restrictions to protect their websites from hackers and other online threats. However, even in some cases, Universities also block access to unknown sites fearing the misuse of the internet.

How Does a VPN Work?

A Virtual Private Network uses a VPN server and a client (users) to establish a secure channel hiding the original location of the users. A VPN service starts working once you install it on your mobile or computer.

Once you turn it on, you can connect your device to any of the servers mentioned in the list. The connection is secure enough that it’s hard for anyone to detect your original IP Address since you are assigned a different one.

What are the Advantages of VPN Services?

It’s the VPN advantages that you can enjoy as a user who likes to binge-watch online content, play online games, gather information for studies. The main advantages of using VPN services are listed below.

1. Information Safety is one of the key advantages of using a VPN

A VPN service masks your IP address and encrypts your online traffic. That means nobody can track your online activities. This assures you are safe from online tracking, and hackers won’t be able to harm you.

“Sorry, this video is not available in your country” is the message many users come across while watching videos online. This is because the website has put geo-block or geographical restrictions on it. The only way you can watch it if you are living there. You probably can’t watch your music videos due to geo-blocks. Let’s not forget that when you browse online, your location is also tracked by the websites.

Since a VPN service masks your real IP address, it can easily let your bypass geo-restrictions, and you can watch anything you want. VPN connects you to a virtual location in the same region or country where the videos or streamed or televised.

These days, it‘s easier to find a wifi network almost anywhere. The only problem with public wifi is they are highly vulnerable to loose security. This means, when you connect to an unsecured wifi network, you may put your personal data in danger whenever you use it.

This information is a gift to cybercriminals, and they can get a hold of your Credit card details, financial detail or even your email credentials. One of the greatest advantages of using a VPN is that it keeps such worries at bay.

4. VPNs for Torrenting and gaming

Remember the recent ban on PUBG? It’s still running successfully in many countries. So, the answer to ceaseless gaming is to use a VPN App or service and let the game continue.

Besides gaming, a VPN service also lets you access Torrent sites, mostly blocked in many countries. Not only unsafe torrenting put your data to risk, but it can also put you in legal trouble as the content uploaded on torrent sites is either pirated or censored if you try to access it illegally.

If you have a knack for gathering knowledge from multiple sources for your projects, a VPN service can be very advantageous for you. Many institutions and universities put blocks on unknown websites, even if they are for informational purposes.

Lack of proper information and knowledge can be serious trouble for students living on University campuses or hostels. That’s why VPN apps or services are a boon for students.

What are the Disadvantages of VPN Services?

There are many benefits of using a VPN, but these can be short-lived if you are not using the right one. There can be many disadvantages of VPN services, from pricing to efficiency. You must be familiar with all the limitations of VPN apps and services before using one.

1. Slow Speeds are commonly counted as disadvantages of VPN

The powerful a VPN app is, the more bandwidth it consumes. Several factors determine the speed of your virtual connection, including your current location from a virtual server, the encryption type, and VPN protocol.

Sadly, VPN doesn’t accelerate your network speed which is the main limitation of using a VPN. Internet connection speeds will generally slow down if you don’t have a high-speed network such as 5G.

Many VPN apps are available on Google Play Store that claims to offer your 100% online protection. Unfortunately, it’s not what happens in reality. Picking a wrong one instead of a reliable VPN service can be riskier.

It requires a lot of DIY research before you finally choose a perfect VPN app or service for your phone or computer. The easy way to identify the right one is to see whether it’s buggy or not. The best way to find a genuine VPN is to read the information on its official website and the number of features it provides.

Either every VPN service offers you limited data or trial use of about a week, 15 days, or a month. There are many such limitations of free VPN services. Such VPNs are merely reliable as data consumption increases.

If you’re short on money, that can be one of the commonly faced disadvantages of VPN apps, as an annual subscription to such apps may also be hefty. Its a no-brainer; if you do research thoroughly, you can spot some good ones like Windscribe. This VPN is available for multiple platforms and offers 10GB of free monthly data with many other exciting features.

4. Not All Devices Support VPNs

Not all VPNs are built for multiple platforms; similarly, not every device support VPN services. VPN services generally work on the most popular platforms such as Windows, iOS, macOS, Android, etc., but there are still some platforms (Linux, Chromebook, Boxee Box) that don’t support VPN applications.

The same problems may occur if you are still using outdated devices or platforms. For example, VPN apps may not work correctly on older versions of Android or windows because they’re not mainly used. You’ll have to set up the app in such a case, which is quite a tricky affair.

Beware, there’s a VPN detector software in the market. Many companies that want to charge people more based on location can track who is using a VPN and who is not. In addition, some eCommerce sites use software known as VPN blockers, which identify and prevent users from using VPNs.

Generally, this software is programmed with websites that require users to create accounts before using their service. The company that generally stores account information like username and email can store a list of your common IP addresses and location details.

Conclusion on Advantages and Disadvantages of VPN

There are more advantages of using VPN Service than the limitations, which can be determined by how much data you use. Much also depends on factors such as your location, network speed, and of course, your wallet. All in all, using a VPN service is the ultimate tool to stay safe and secure so far. 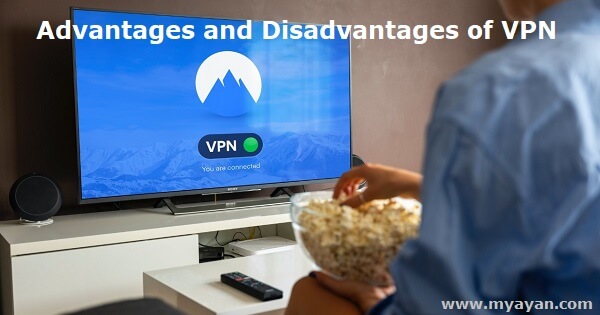 Are there any disadvantages to using a VPN?

VPNs have several benefits and drawbacks. Some VPNs may slow down your internet connection. You could be prevented from using certain services or websites, such as Netflix. In some countries, VPNs are illegal or highly regulated.

Why you shouldn't use a VPN?

A Virtual Private Network (VPN) won't encrypt your traffic magically; it's just not physically possible. If the endpoint is expecting plaintext, there's little you can do about it. The only encrypted portion of your connection while using a VPN is from you to the VPN provider. Also, keep in mind that the VPN provider has access to and can track your network traffic.

Hackers may access your transactions and sensitive information like names and bank account numbers if you don't use a VPN, allowing them to steal your money or identity. Your activities will be encrypted if you utilize a VPN, ensuring that your transactions are safe and secure from prying eyes.

To secure your internet privacy, you sign up for a VPN. However, according to a study conducted by The Commonwealth Scientific and Industrial Research Organisation (CSIRO) in Australia in 2016, many VPNs do not offer the level of protection that users require. Free VPNs are more likely to monitor your data.