There is something unique about those yellow images, isn’t there? Every time you receive an emoji in your inbox, it delivers you many unexpressed feelings and words. Human emotions are the only thing that needs more than a dictionary to be expressed rightly. When there are no words or perhaps no time to send your feelings to the other side of the line, emojis always come first to everybody’s senses. Are these emojis the new language of this generation that not only saves time but also takes away the skills of writing? Let’s have a look at what advantages and disadvantages of using emojis in communication have for you here.

These yellow smileys or ideograms were used in Japanese mobiles, which takes us back to 1997 when their use had begun. It’s not too long ago that people started using those images to convey their expressions and feelings. Now, you can suit yourself an emoji and just hit send any image you want, the list of emojis keep getting bigger and bigger whenever a messenger app releases its update every time.

If we look deeper into the history and use of emojis, we have turn 2000 years back where these were used as symbols in Hieroglyphs (Sign and symbols language written on ancient structures and Pyramids) of Egypt.

Now, different mobile and smartphone companies have their own range of built-in emojis so consumers can speak through this uniquely defined language.

According to Neurosciences, Yellow Color gives hope and happiness; this is why all the smileys are yellow. The motive is pure, to share joy and light around the world, and people can worry less and enjoy more of their life.

Everybody from kids to adults is familiar with the use of emojis why we use them and what every image conveys. Earlier, these emojis were popularly used to write personalized or informal messages only. There are quite a few organizations and brands that still prefer emojis as an unprofessional way to communicate.

Somebody had to break the barrier and had put an emoji into their regular mails. Resultantly, many companies have introduced an emoji or two in their subject lines. The response both promising and impressive. According to a study carried out by Experian, emails containing emojis sent via the mailing list were 56% more likely to be responded to.

In 2015, Oxford Dictionaries named the emoji U+1F602 (Face with tears of joy) as the word of the year. Ever since these symbols and images have been receiving more recognition and as a language, emojis have been added to the curriculum at different universities in the UK namely, University of Edinburgh and Cardiff University.

Advantages and Disadvantages of Using Emojis in Communication

A lot has been discovered about emojis in the past decade, and time has come that people like to discuss political, personal, and social agendas using these yellow symbols and faces. How far do we expect these emojis have transformed humans? What are the pros and cons of emojis that have redefined human emotions drastically? Let’s find out.

Advantages of emojis in Personal and Professional Life

1. Everybody Loves to Smile

Everybody deserves a smile, which is the best outfit that makes us all complete. The first logic behind these yellow smileys was to spread joy and positivity during communication. Even sciences prove what yellow stands for. Emojis have become a great way to express or help people forget about their pain and troubles.

The digital age, where time is money, is full of convenience and shortcuts; putting an emoji is the simplest way to send what you want to express or feel towards someone you are talking to, whether empathy, grieve, or happiness. Why is this language so popular? Because sometimes it is hard to explain or to use proper diction to what you want to say.

No questions to this one, alright ;). For users who prefer less talking and typing, emojis help them choose the right emotion with a more customized and personalized way to get it done within seconds. Many social media platforms provide a myriad of image characters to help you express your concern, or react to a particular scenario. If you are habitual of making too many typos, you can always have the image characters to send your message to the recipient.

This may hit you as a surprising fact, but many organizations have started putting emoji in their mailers’ list. Putting a smiley is a better idea to promote your brand if your organization deals with social engagement or the noble cause of the. Many young entrepreneurs have built their brands by giving an additional touch when your recipient has thousands of emails to check; it is easier to spot the one with an emoji in the subject line.

Being the third famous language of the world, Emoji language is also culture-neutral. Regardless of geographical and religious differences, you do not need any additional translator app to communicate with others. One of the noticeable benefits of emojis is that you need not talk if you are unfamiliar with languages other than your locale. Emoji language assists you as a visual dictionary that is expected to grow further in the future.

Disadvantages of using emojis in communication

How fruitful is to stop writing messages or talking directly and use images to express ourselves to each other? When the time tells a different story, have we stepped too deeper into the digital age, where tears also become digital? There are some serious dangers of using emoji language that threatens the credibility of human-to-human relationships. Check them out in the disadvantages of using emojis language here and conclude.

Kids are easily attracted to emojis that interest them more. Where emojis are the right ship to sail at an early age for preliterate kids, they can quickly learn to communicate through emoji language. On the other hand, the more kids age, the sharper their addiction to emojis grows. Ultimately, kids become more susceptible to acquire poor grammar and writing communication skills.

2. Emojis are still not preferred for Formal Correspondence

Some professionals may have adapted the new language to communicate freely among their formal circles or groups, leading brands and companies are still not in favour of the emoji language to transact business correspondence and other official exchange of words. However, this sounds quite right on their part, the base of a formal communication should be written words rather than character images to clarify the purpose and motive of business.

3. Emojis are hard to judge

People can fake emotions easily, and emojis are the most affordable way to cover up for the people who are mastered at them. The persons on the other end may not be able to identify whether the sender has real or unreal intentions or feelings. People are also prone to fall prey to impersonators and manipulators.

4. Users should be Aware

Emoji characters convey different meanings with respect to their use and as per the given scenario. There are some emojis that precisely signify adult content. Kids need to be educated about the differences first so as not lead to any confusion and misconception about the use of appropriate emoji. Special attention must be paid while using inappropriate emojis at the workplace and formal circle.

5. Older Adults have a little grip on Emoji language

Older generations are unfamiliar with the use of emoji language, having a hard time grasping the correct meaning of each character. This further puts them in awkward situations while broadening the communication gap. This might trouble you when you are trying to get in touch with your grandkids living distances away. 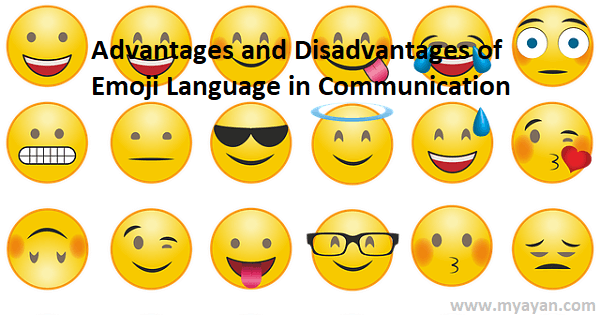 What are the top 5 most used Emojis?

1.The smiling face with smiling eyes. 2.The winking face. 3.The heavy black heart (red heart) 4.The grinning face. 5.The rolling on the floor laughing face.

Are Emojis destroying our language?

Emoji doubtlessly is a lot of fun while communicating but sadly, this language is destroying the English language. A study by Google has revealed that out of the two thousand adults aged 16 to 65, who were asked their views, 94% reckoned English was in a state of decline, with 80% citing youngsters as the worst offenders.

Do Emojis reduce our ability to communicate?

Facebook gives users a limited list (six emojis) of emojis so users can express their concerns; this somewhat puts users in a dilemmatic situation whether these are sufficient to convey feelings. Emojis also deteriorates the written skills needed to express oneself.

Why do people use Emojis?

Initially, emojis were designed to represent emotions as symbols and signs. People use emojis to react or express their ideas, opinions, humor, and irony. Emojis further substitute the body language and emotions concurrently.