Advantages and Disadvantages of Koo App

With Koo, India may just found the answer to “What is the best Twitter Alternative”? The $100 Million value app is now attracting more users from India as more controversies surround Twitter. Is it worth switching from a decade-old social media platform to a new entrant? Or is it best to try the new India-made app? The Advantages and Disadvantages of Koo App evaluate what’s unique and what’s limited with the app.

What are the advantages of Koo App?

Being an India-made micro-blogging app, there are several Advantages of Koo App for users. Since it focuses on the Indian audience, they are the ones who’ll reap its advantages.

Koo App is available for Android, iOS, and desktop use so that you can enjoy Kooing on the operating system. This app is released for all three different versions, so it’s an easy-to-use app with many similar features to Twitter. The extended character limit (400 characters) will be its key advanced feature to watch out for. Users will be able to post longer posts which is one of the main advantages of Koo app.

The app rests on Google Play Store, App Store, and on its official site. Not only it’s authentic and verified, but it will also be free of charge. There may be some in-app purchases though. Users can enjoy its features for both personal and business use.

3. Million Dollar Value is one of the key advantages of Koo app

Koo, earlier known as Ku Koo Ku, won India’s Aatmanirbhar App Innovation Challenge in August 2020. With hitting a value of over $100 million already, the app has gained credibility in the market. Moreover, this microblogging social networking platform is based in India’s Silicon Valley (Bengaluru), which adds another start to its reputation.

What are the disadvantages of Koo App?

1. Limited users are still among the disadvantages of Koo App

Even though lists of celebrities, sports stars, and politicians have started using Koo, there is a long way to go for the app to be known among perfect Twitter Alternatives. The current number of users remains more of a concern as the app caters to the Indian audience.

It’s Twitter that remains dominant in most nations. Lack of dominance is one of the disadvantages of Koo app. Since many users already have a huge fan following on Twitter, they may not like the idea of switching to another platform. Additionally, the businesses already thriving on Twitter may not find the right audience to promote their business. For the international market, Twitter is a friendlier option.

Koo will need some time, maybe a couple of months, to get globally recognized. Twitter leads the chart with over 300 million users worldwide. The numbers speak the rest as the Indian App has built its user base to 6 million.

Nigeria has become the second nation to allow Koo as an Official Twitter Alternative after banning the American microblogging platform. Thus, there might be a chance for Koo to slip through the cracks.

The app boasts of supporting other languages in the future. But there’s still a question of whether it will support other international languages or not. If so, the users will have to wait for it for nobody knows how long.

Conclusion on Advantages and Disadvantages of Koo App

For Twitter users with huge fan following or those with a few, considering these Advantages and Disadvantages of Koo App will be useful. Given the multiple language support from the award-winning app, it’s most beneficial for Indian users and businesses to switch to Koo. For users in other countries, Tweeting instead of Kooing is what sounds sweet for now. 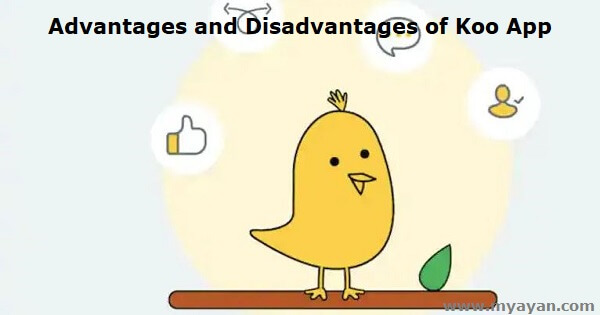 What is the use of Koo app?

According to its Google Play Store, Koo app is described as A personal updates and opinion-sharing micro-blogging platform, according to its description. The app's purpose is to allow people to communicate in Indian languages with a strong local Indian community.

Can we earn money on Koo?

Koo may provide a paid service that allows companies to link chat-bots with their accounts. Instead of manually responding to each question, Chatbot integrations could make it simpler for firms to create leads, sell products, or answer consumer inquiries on the platform.

Is Koo An Indian app?

Koo is a microblogging and social networking service from India with its headquarters in Bengaluru, Karnataka.

How many people use the Koo app?

Koo, which currently has 15 million users, is poised for a new development phase.

According to a new study, Koo, India's local language microblogging platform, has stronger networks than Twitter. According to the research, the app experienced an increase in users in August 2020, around the time it won the Aatmanirbhar Bharat App Innovation Challenge Award.