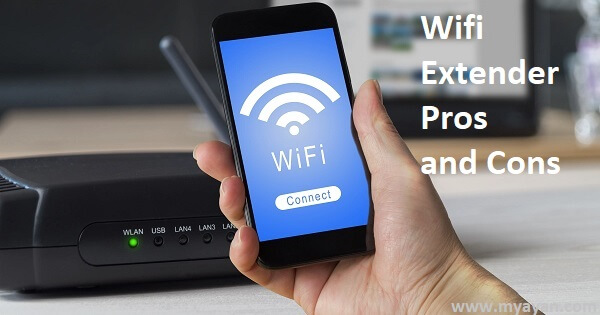 A WiFi Range extender is what you need to boost your wireless network and optimize it for the lag-free wireless network system. If you start noticing frequent connection drops and in different sections of your house or experience no network at all is some closed locations, you might prefer to install a wireless repeater to curb the problem. WiFi Extender Pros and Cons probe into how good a WiFi signal booster (WiFi Extender) is, and what you should need to know before installing one.

You can reap the advantages of WiFi range extender in different scenarios based on various aspects. These pros of WiFi Extender look into how much you require one and how much cost-effective a WiFi extender proves to be.

A WiFi Extender or repeater is a powerful solution when you need to cover wireless network coverage of a large residence. One of the main pros of WiFi extender is integrating a wireless extender into your home would broaden the range of your wireless network throughout the premises. It acts as a repeater and strengthens the signal of your router.

2. WiFi Extender is Easy to setup

Most WiFi range extenders nowadays come with automatic configuration with plug and play functionality. You don’t need to acquire technical knowledge to set it up to use. You can unbox a device and plug it in the power socket and launch it within minutes. There are no overhead of a WiFi extender installation whatsoever.

Installing a WiFi range extender not only allows you to reuse the signal throughout your home but also, saves your time and laborious effort. This way, you can make use of your older network equipment to its optimum life.

You don’t need to extra network equipment since your network coverage in expanded by installing a wireless range extender. Saving money is another perspective, and one of the pros of using wireless extenders.

Besides, being easiest to set up, a WiFi extender installation requires no extra wires or legwork. Since these devices are all pre-configured, you do not have to worry about additional installation costs or buying new cables for using it.

One of the major drawbacks of using a shared Wireless network is the reduced rattling speed whenever a new user connects to your home network. Imagine one person is streaming in bulk, while you are struggling to load your Wikipedia webpage.

It's usual to find yourself in such situations at times when your shared bandwidth diminishes as more people join it. A WiFi range extender benefits these users to access the network regardless of their location inside the home by providing multiple channels and frequencies.

A Wi-Fi extender steps in as a quick, smart and inexpensive solution to coverage issues with your wireless network but, sadly, a repeater does not solve all the problems. You may come across these cons of WiFi Extender that can turn your opinions upside down.

A WiFi range extender improves signal strength, but what if your wireless router is emanating weak signal? One of these leading problems also turns into drawbacks of using a WiFi Extender at home mainly if your router gets older or unpatched. Even though your router and wireless range extender are new, a repeater usually halves network bandwidth for any computers connecting to it.

A repeater receives a signal, processes it, and rebroadcasts it across various channels. This process is bi-directional, i.e. from computer to router and vice-versa. This reason leads to reduced signal strength.

As a result of weak signal, you are most likely to expect a downgraded speed from your WiFi network as a signal passes through the repeater. A wireless range extender doesn't turn out as the best solution in most instances as it works to extend the signal inside your home as your network quality will get worse.

Everyone has a range of electronic equipment and devices in their homes used as domestic appliances. Presence of common obstructions such as Microwave ovens, cordless phones, Bluetooth devices, and wireless monitors and electrical fittings in the wall may lower your network signal.

Your wireless network signal gets reflected, refracted, or even absorbed by such obstructions. Thus, if you want your network optimized, spend some time on choosing the best location for your Wireless range extender.

Often configuring a range extender from a different brand with the router can turn into a task at hand. This may lead to inoperability or incompatibility issues. Be advised to buy the same brand as that of the router.

The repeater usually has its own network name (SSID) and password, which differs from the SSID of the router. Setting up an entirely different brand can be somewhat complicating.

Be advised to check whether the firmware of a WiFi range extender gets frequent updates or not. It would be best if you considered this factor so as to keep using it for an extended period. Outdated firmware can turn your wireless range extender useless. If the patches are not available, then avoid buying it.

What is a WiFi Extender (WiFi range Extender)?

A wireless range extender is an external device that amplifies the existing signal from a wireless router or Access Point and rebroadcasts it as a secondary network signal.

It bridges the gap between two or more hosts that interconnect over IEEE 802.11 protocol given the distance between the two is too long to establish a direct connection. A Wireless range extender specializes as a standalone networking device that enhances signal strength within homes and small offices.

In simpler words, a WiFi range Extender acts as the mediator between a router and your internet (pros and cons of internet link) device to relay the connection by taking the weak signal from your router, amplifying it, and rebroadcasting it over different channels so you can use it on your internet-connected device.

How do WiFi Extenders Work?

A typical Wireless range extender expands its coverage by capturing the current wireless range, improving its strength through different available channels and send it across a wider area within your home or office.

For instance, imagine you are studying in your room on the second floor of your building with your WiFi router installed on the first floor. You want to connect your laptop or mobile, but it’s hard to get past the hindrances.

A WiFi Extender is a perfect solution to curb this problem which, when switched on, lets you connect to the router wirelessly.

What is the difference between WiFi Extender, WiFi Repeater, and WiFi Booster?

These terms are used interchangeably these days though they differ slightly.

Wireless Range Extender: Works by taking the existing wireless router’s signal and re-broadcasting it on a different channel. It can connect to your wireless modem via coaxial cable or Ethernet cable. You can save the network bandwidth using a range extender as it prevents maximum interfering obstructions.

WiFi Repeater: These wireless range extenders work the same way but by connecting to your router wirelessly on the same frequency. Since the connection is made using signals, the network bandwidth is dropped or wasted away due to electronic interferences, and the available bandwidth is halved, resulting in lower signal.

WiFi Booster: Common term used to refer to all the types of WiFi Range extenders and repeaters.

Don't be too quick to trash your old router as you can resolve the weakening signal issue by adding a WiFi extender in your home.

It's a great start to save a lot of money. Replacing your older router for a newer one can only be an alternative to get better wireless coverage around your house. You can opt for buying a new router considering how old your current wireless router is.

How far does wifi extender reach?

A typical WiFi Ranger Extender offers coverage from 800 to 1200 sq. ft. depending on its brand, built, and firmware. However, the far the reach, the higher is its cost.

Which wifi extender is best?

Why are WiFi extenders bad?

Wireless range extenders reduce the signal strength which can worsen your network speed. The other issues like electromagnetic interference and physical obstruction are also a few reasons you should consider before investing in WiFi range extenders.

Can WiFi extender cause problems?

Interference is one of the most known disadvantages of WiFi extenders. On the other hand, setting up a Wireless extender may also be difficult in some cases, specially when you have interoperability issues. You must be aware of how to set up a WiFi range extender and pair it with the router using the SSID.