Advantages and Disadvantages of Chromebook 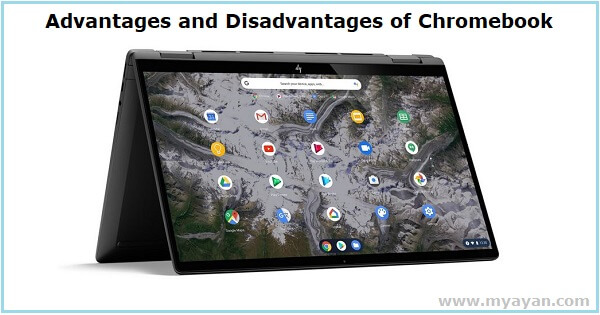 The world of computing has transformed and so have human needs. Now almost everyone depends on computers, whether smartphones, laptops, or Chromebooks. With the invention of ChromeOS in 2011, more consumers could buy computing devices at affordable prices. Running on cloud storage, Chromebooks have several benefits over the conventional cabinet-based computer. However, if you are planning to purchase one for your office or college project, consider the advantages and disadvantages of the Chromebook.

What are Chromebooks Used For?

Acer Inc. and Samsung were the first to roll out Chromebooks in the market for consumer use. Chromebooks benefits include easy and quick access to tools while connected online. They allow students to access information online and at home rather than needing a specific computer that may limit them from doing other tasks.

You can also install specific offline software for games and applications like spreadsheets or word processors. The only downside is it doesn’t run locally, so you might have trouble finding programs with local storage saved onto their computers.

Aside from being used in schools, Chromebooks are also very popular among people who frequently travel because they don’t need to carry around extra power cords since it runs wirelessly. They are also lightweight and have a long life which allows you to use them all day without worrying about getting a new power source.

What are the Advantages of Chromebook?

The inventors predicted certain Advantages of Chromebook earlier, and so far, they have been absolutely on the button. Here are some of the following reasons to own a simplified laptop.

The first benefit of owning a Chromebook is its lightweight portability. Most Chromebooks weigh just below 3 pounds which even kids can carry to their schools. Another thing about the Chromebook is that it has long battery life, so if you love working outside or traveling, this is a very convenient laptop for you.

Although they are as vulnerable to phishing attacks as conventional computers, there are fewer viruses than Windows. ChromeOS patches itself automatically and uses sandboxing in case any malicious programs do infect the device. Although there have been vulnerabilities found on Chrome OS, it’s rare because it runs web applications instead of local ones.

3. Cheaper Price is one of the key advantages of Chromebook

An average laptop may cost you around $600 and the price range may vary as you ramp up its configuration. On the other hand, you can afford a Chromebook at around $200 which can vary between $300 and $400 if you opt for a mid-range model. One more benefit of Chromebooks is that they are cheaper. The same amount would only get you a Windows 10 laptop with no free software included.

4. Chromebooks have a longer battery life

One of the commendable advantages of Chromebook is you can rely on it for at least 8 hours. They have a longer battery life than many other laptops. If you turn on the sleep mode, you may be able to extend it further. Even though many Windows laptops have scaled up on the battery factor, but Chromebook is still the showstopper.

Chrome integration means you are at home and can use most of the services from Google like a privileged user. Being able to use cloud storage, you get the chance to store your digital data without paying extra. Chromebooks contain 100 GB of cloud storage on Google Drive for two years. Then, if you need more space, it’s only $1.99 per month to add another terabyte.

What are the Disadvantages of Chromebook?

Things seem to fit in the right place, but depending on your needs and operations, there can be many disadvantages of Chromebook. At times, you may feel like replacing a cloud-based computer with a laptop. Here are some reasons why you must reconsider before buying a Chromebook.

You can’t log in to your Windows 10 account on a Chromebook because it would be an “unauthorized device.” The limitations of offline apps are major drawbacks of using a Chromebook, as all your files and apps are stored in the cloud, meaning you cannot use them without an internet connection. Unfortunately, this limitation cannot be changed on ChromeOS at the moment.

2. Cloud storage is also among the disadvantages of Chromebook

Chromebooks are designed with minimal local storage. The Chromebook's operating system (OS), Chrome OS, is based on the Linux kernel and uses Google's Chromium OS fork as its basis. It allows you to access all your applications through the cloud, so you don't need to directly download an application on a device.

Only those applications that can be installed offline have been downloaded from the internet onto a device; others run in the web browser. This means that there is no space left for other programs unless you use it for school work only.

Chromebooks do not have traditional printers like Windows computers, but instead, they use Google Cloud Printing; this means you need to be connected to the internet to print something. This is one of the dire disadvantages of Chromebook because you have to have an internet connection and a printer connecting via a cloud service.

Chromebooks are not gaming laptops; they have very minimal graphics and processors. They are primarily for schoolwork, documents, and simple web browsing. A Chromebook is not meant to do gaming as it has a low spec processor and a small amount of RAM, meaning it just cannot handle the task.

Furthermore, it would be even slower on chrome OS than Windows 10 because Chrome OS is limited to web applications only rather than both web and local applications.

5. No video editing or photoshop capabilities

Because Chromebooks use the cloud, all the processing is done on the Google site. This means that users cannot process videos and photos to edit them; they are limited to simple text documents.

If you wanted to work with video or images, then using a Windows computer would be superior. It allows you to install programs locally on your computer rather than just online apps that can only do basic tasks with no power behind them.

Conclusion on Pros and Cons of Chromebook

Chromebooks are easy to use and entirely based on Chrome and Google. You can certainly enjoy plenty of cloud space to save your project if it's only what you want. Understanding the Pros and Cons of Chromebooks will also let you know what purpose they are most suitable for. If it's just basic tasks you want, go for it; otherwise, look for a conventional laptop for online gaming or storing local data.