Today we are going to talk about wifi extender or wifi repeater and other topics related to it. Wifi extenders are devices which are used to extend the range of coverage area of your wifi network for better connectivity in long distances or ranges. But let us know how do wifi extenders work, Wifi extenders rebroadcast the signals of your existing wifi.

If you want to know which WiFi extender is the first AC2200 extender with MU-MIMO then it is none other than NETGEAR Nighthawk X4 AC2200 WiFi Range Extender (EX7300). MU-MIMO or multiple-input and multiple-output is the technology in which more than one user can communicate with each other with the help of one or more than one antennas.

This Extender has powerful amplifiers which allow you to increase the range of your wifi up to 930-meter square. And it has 2.2 Gbps of dual-band transmission speed.

In a test for fifty-foot wifi range extender test the Linksys RE7000 Max-Stream AC1900+ WiFi Range Extender attained an amazing speed and thus able to deliver 261.9 Mbps of speed.

Featuring Cross Band Technology for maximum use of both bands at the same time for high-speed connection as well as Beamforming Technology for directional transmission of the WiFi signal to the connected devices, the Linksys RE7000 WiFi range extender has what it takes to cover up to 10,000 square feet with a strong WiFi signal.

Offering speeds of up to 1.2 Gbps and operating over the 2.4GHz band which comes with 300Mbps and 5GHz band which comes with 867Mbps the TP-Link AC1200 RE305 is one of the power efficient WiFi extenders. The TP-Link AC1200 RE305 has an intelligent notification system which includes a signal light to tell you whether the best location to install the extender.

The Built-in Access Point Mode of TP-Link AC1200 RE305 allows you to use this extender as a wireless access point.

Having features like dual Bands of 5GHz and 2.4GHz, four times greater Connectivity, Audio Jack, Linksys Spot Finder Technology, music streaming, easy setup, Audio streaming capability, and much more Linksys RE6500 AC1200 Dual-Band Wireless Range Extender is one of the best wifi range extender. It is also one of the powerful wifi signal booster. It comes with four gigabit Ethernet ports. It means that you can connect multiple devices with this wifi range extender.

Coming with two external antennas that help in enhancing the Wi-Fi coverage NETGEAR EX3700 Wi-Fi Range Extender (AC750) is one of the routers with the best range. It allows you to directly plug it into the sockets of the wall and also provides an astonishing speed of 750 Mbps. One of the major features of this extender or router is that it comes under a very cheap price. And for the guidance, you can also use their Wi-Fi Analytics App.

The TP-Link RE650 provides fast speeds at up to 75 feet and have the amazing plug-in design. It has dual-band wireless-AC support and four external antennas. If you live in a large house then TP-Link RE650 can prove to be a great choice for its long-range connectivity and speed. With the TP-Link's Tether app you can easily monitor your network. This extender has a lot of features to offer and some of them are the extraordinary performance, operations with the dual bands, interacting interface, etc.

There are a lot of reasons available to you to use D-Link Wireless Range Extender such as you can easily abolish the dead zones with the help of DAP-1330 extender, it can find the desired location for prime coverage. It is one of the sturdy wifi extenders which can extend wifi network ranges for several years. It maintains and offers a speed of three hundred Mbps. It also comes with a handy app which always helps you to use the extender perfectly.

If you are thinking of extending your current wifi network's range with the help of a wifi extender that can be cheap, compact, and can be bought under a small price then TP-Link RE200 can be proved as a savior for you as it can provide you a modest speed that too without disturbing your budget. TP-Link RE200 offers a 100 Mbps of speed for the nearby device is connected to its Ethernet port.

Does not matter if you are an iPhone user or an Android device user, NETGEAR NIGHTHAWK AC 1900 (EX 7000-100 NAS) is compatible with all types of devices and Operating systems, User interface. Some other features of this extender are it has dual band wifi and can offer speed up to 1.9 Gbps which reduces any interventions in your network. The NIGHTHAWK comes with 1 GHz processor and thus boosting the performance of your wifi network. It is also stocked with 700mW amplifiers and to improve the coverage this extender has 5dBi antennas. It is fully equipped with 5 GB Ethernet ports in order to connect all of your devices that come with wires.

As the name suggests Securifi Almond Touchscreen Extender comes with a touchscreen which makes it different from a lot of wifi extender out there in the market, in fact when this extender was launched it became the world's first touchscreen router. but the touchscreen will not convince you to go with it so here are some of the amazing features of this touchscreen extender which are as follows wireless compatibility of 802.11bgn, 300 Mbps speed, 2 antennas, 2 LAN ports, 1 WAN port. 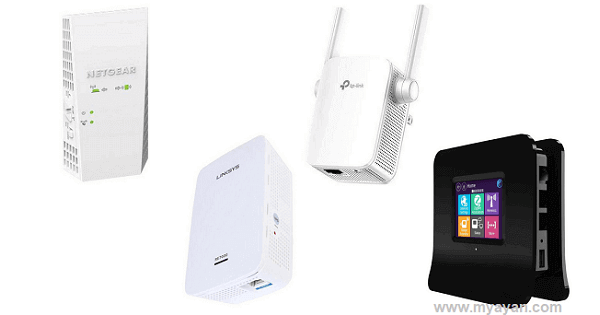 What is the difference between Wi-Fi extender and WiFi booster?

People may get confused about the WiFi Booster VS WiFi Extender. There is no clear distinction between devices that manufacturers call boosters and devices they call extenders. WiFi boosters and WiFi extenders are devices that improve WiFi coverage by amplifying the signal or expanding the range.

How do I choose a Wi-Fi extender?

There is no need to worry if you are experiencing a low WiFi signal in some parts of your home - simply use an extender to boost the signal and enjoy surfing the web, streaming movies and music, and gaming without any interruption. All you need to do is identify your WiFi dead zone and place the extender at the halfway point between the router and the dead zone.

WiFi extenders can help expand your wireless network's reach; however, their effectiveness is often limited by several factors. These can include the speed of your internet connection, the distance from your router, areas in your home in need of WiFi coverage, and the WiFi demands of your family.