Pros and Cons of Standardized Tests 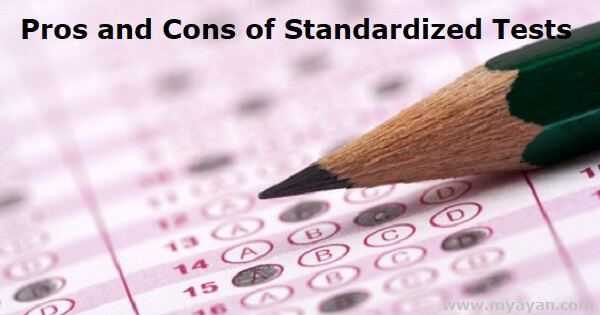 Standardized testing has become a major concern in education, with parents and students concerned about how accurate they are in reflecting a child's skills, as well as the potentially harmful effects on children who may be bright but might struggle in high-stakes testing circumstances.

There are, however, pros and cons of standardized testing. Standardized tests may be quite beneficial in assessing the quality of the curriculum and whether it fulfills specific learning targets and goals. Standardized assessments also assist in identifying areas for improvement in education by highlighting areas where students' education may be lacking.

What are the Pros of Standardized Tests?

Here are some of the main pros of standardized tests. Even if they are aware of the drawbacks to standardizing tests (see below), schools, colleges, and states that standardized demand testing tend to believe these statements to be true.

This is the most common argument that advocates for standardized testing are fair. It's a single exam given under identical circumstances to determine student achievement fairly.

The idea is that if everyone takes the same test under the same conditions, then the results achieved will be objective. This objectivity is lacking when individual teachers grade their own students' work because personal biases can come into play.

3. Increased Competition is one of the pros of Standardized Tests

Standardized tests are believed to increase competition among students, schools, and states. The feeling is that if everyone is being tested against each other, then they will all work harder to improve their standings.

By testing all students on standardized, it becomes easier to identify academic gaps across different groups of children. These gaps can then be addressed with targeted interventions.

Standardized tests are often used to hold teachers accountable for student achievement. If test scores are low, it may be indicative of ineffective teaching in the classroom. Parents and school management have it as one of the pros of Standardized tests.

What Are the Cons of Standardized Tests?

On the other hand, many people do not feel that standardized testing is a valuable or reliable tool for assessing student achievement. This is why several school systems resist changes like Common Core state standards, and more colleges are becoming test-optional. The following are some of the most important cons of standardized tests.

Not all students have access to the same resources or opportunities. Some students may have parents who can afford to hire tutors or pay for extra help, while others do not. This means that the playing field is not level, and some students start at a disadvantage.

2. There are Potential Cons of Standardized Tests for Teachers

Furthermore, many experts argue that adopting a test-centric approach to learning endangers teachers' ability to do their jobs. A concluding standardized exam at the end of the school year might disrupt a teacher's curricular plan and force them to cover material that isn't as important to their pupils. Similarly, many instructors regard frequent testing throughout the year as distracting and unproductive for student learning.

The high-stakes nature of standardized testing can lead to cheating by both students and teachers. When so much is riding on the results, some people may feel pressured to cheat to improve their chances of success.

Another claim is that standardized testing leads to otherwise successful kids losing confidence in themselves and their abilities. Many pupils suffer from test anxiety, which means they don't perform at their best because taking a test causes them so much distress. If low scores demoralize students, evaluating their performance only based on an impartial test may have a detrimental effect on graduation rates.

Some people feel that standardized tests are inaccurate measures of student achievement or progress. This is because they only assess a narrow range of skills and knowledge, and they don't consider each child's individual needs. In addition, critics say these exams often emphasize rote memorization rather than critical thinking or problem-solving skills. A student’s true potential remains unevaluated which is among the major cons of standardized tests.

Conclusion on the pros and cons of Standardized Tests

Some proponents of these exams argue that they are an accurate measure of a student's ability and can help identify areas where a student needs improvement. Others assert that standardized tests are ineffective at measuring intelligence and instead create stress for students and their families. But, since the US school system has mandated it, there are not many parents, students, or teachers who can decide.

What is a disadvantage of standardized tests?

Test results can shake student confidence. While this testing approach may be beneficial, it has several drawbacks: It might cause a lot of stress. When taking exams, kids are under a lot of strain.

What are the advantages of standard test?

Standardized tests can show the progress of students over time, in addition to comparing them against one another or identifying problematic schools or districts. Standardized tests may also demonstrate student improvement over time by taking the same or similar exams at various intervals.

What are the potential problems with a standardized test?

Opponents state that standardized tests simply determine which children are competent at taking tests, give no valid measurement of development, and have not improved student performance. The tests are racist, classist, and sexist.

How are standardized tests unfair?

Social status, ethnic background, regionalism, and other cultural distinctions are unavoidable. Those who can afford test prep unfairly benefit. Ed reform drastically restricts teachers' ability to adapt to student differences. To educators in the classroom.