Advantages and Disadvantages of Being Multilingual

Having a grip on multiples languages helps in everyday life with cultural enrichment and understanding of different perspectives. However, everything in this world comes with its limitations. Whether you want to learn a new language for personal reasons or as an entrepreneur looking to tap into the global market, the advantages and disadvantages of being multilingual are always helpful.

It may be a surprise to know there are over 5000 languages spoken in the world. But it won’t be a surprise if you knew at least 5 of them. In fact, there are plenty of benefits of being multilingual. Being able to speak multiple languages is a great skill to have. For starters, it can help you in your career by giving you an edge over others who cannot speak more than one language.

Some people are multilingual because they grow up with parents who enlightened them with different languages. In contrast, others learn it because they moved to a country where another language is spoken. Multilingualism benefits an individual in almost every walk of life. There is rarely any instance where being fluent in multiple languages turned problematic for someone.

What are the Advantages of Multilingual?

Having the ability to speak multiple languages can enhance cognitive abilities. The human brain constantly makes associations between words and sentences, which enhances understanding nuances in a language. It's something that multilingual people have an advantage with compared to monolinguals.

2. Employment opportunities are major advantages of being multilingual

Multilingual people also have the potential for better employment prospects since many companies want to expand their business worldwide. Their knowledge of different cultures and languages can help them become suitable representatives, which is why they are in higher demand than monolingual speakers.

Being multilingual can also improve your memory. Since you have to remember words of multiple languages, it makes you more attentive and observant in the world that surrounds you. That's the main reason why bilingual people often surprise monolinguals with their ability to memorize things that others cannot recall.

Multilingual individuals are also adept at adapting to new environments. Since they have been forced to adapt in the past, it allows them to easily settle into a foreign environment without feeling too overwhelmed or anxious about making mistakes. This is especially important for those who leave their home country to study abroad or permanently settle in a foreign country as expats.

Finally, being multilingual can help you distinguish between similar sounding words that have different meanings. For example, the Spanish word 'embarazada' means pregnant while embarazar means to impregnate or deflower - a subtle difference in meaning that someone bilingual may be able to recognize more easily than those who speak only one language.

What are the disadvantages of Multilingual?

Can there be any disadvantages of being multilingual? Unfortunately, there are. Some of the limitations of multilingualism include difficulty communicating with family members or friends from your motherland. Provided there are 5000+ languages spoken across the globe, you may find yourself in a situation dealing with people from other countries without the knowledge of their languages.

Losing touch with your native language is a common language issue you may face meeting your family after a long gap. Since most multilingual individuals grow up speaking one language at home, it makes it difficult to communicate with family members if they only speak the same language or dialect. This is especially true in countries where there are many languages spoken.

Even though you may be able to understand each other when talking about simple things, deeper conversations can become problematic since you both lack knowledge of certain words and phrases that would make communication easier.

2. Cost of learning is one of the main disadvantages of Multilingualism

Learning new languages can also become expensive. Since you are learning about other cultures in addition to the language itself, it takes longer to fully understand what they are saying without knowing their history or traditions.

Expenses include buying books and textbooks that explain different concepts when travelling abroad is something that not everyone has money for.

You seriously need to dedicate your time to learning than your hobbies. This includes remembering words from multiple dialects, understanding phrases with similar meanings but different connotations. Depending on dialects used in different countries and cultural differences between people, you may find it difficult to switch to a different language instantly.

For example, compare British English to American English, Potato chips in the US mean French fries, while a footpath in the UK refers to a walkway in the US.

Finally, one of many problems with multilingualism is the lack of skilled educators who can teach other languages. Since there are many dialects and multiple countries with different cultures and traditions, it takes a lot to become proficient in all areas. Not everyone has time or money to invest in. being multilingual in two more languages feels like being a jack of all trades master of none.

5. Shift the focus of a student to another subject

Lastly, being multilingual can have an impact on the performance of students in school. Those learning English as a second language can have a hard time tending to other subjects.

Since it takes time to learn new languages and different cultures, many teachers feel that their focus should be shifted to other subjects. This turns out to be problematic for students because they cannot fully understand how others interact with each other until later on they move abroad or communicate with people from around the world.

Conclusion on pros and cons of multilingualism

If your goal is being multilingual, then knowing how specifically the pros and cons of multilingualism can help you is really important. Adopting this skill will give you an edge over others by helping you be successful both personally and professionally.

Concurrently, being fluent in many languages will keep you in running mode always. Make sure not to neglect to put effort into learning languages because practice makes perfect. 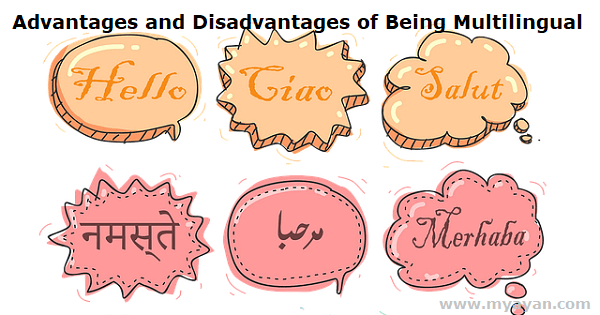 What are the disadvantages of multilingual?

One of the more significant drawbacks is that if the student does not speak her native language, she may be looked down upon by community members for using another language. This might drive the student away from their native area.

What are the advantages of being multilingual?

A multilingual can communicate with more people than a single-language speaker and can be valued for this ability. In addition, a person speaking multiple languages can serve as a translator or ambassador.

Why is multilingualism an advantage in the workplace?

A multilingual person can work in a wide range of jobs since they have more options. Having more mobility allows you to shift around inside an organization. You may use your language skills with other talents to seek the job opportunities you desire in organizations with various workers and consumers.

Is multilingualism beneficial or not?

According to experts, multilingualism might help boost exports, raise salaries, and foster innovation. In addition, researchers have shown that multilingualism is beneficial to the economy. Nations that promote different languages develop many benefits, including more tremendous export success and a more creative workforce.