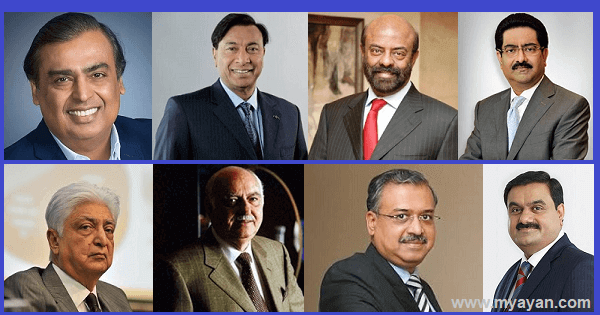 India is a memoir of holding the Highest Net worth personality around the world and also have had a legacy of few richest man in India & billionaires to be the citizen of India. Today let's discuss out few wealthy families and personalities who are renowned for their net worth and business value. You will also notice that India, after the USA and China, has the largest group of persons with an extravagant lifestyle and business asset.

Mukesh Ambani, born on 19 April 1957 in Aden, Yemen, and brought to India by his father Mr. Dhiru Bhai Ambani. He is a graduate in Chemical Engineering and an MBA dropout from Stanford University.

A chairman and Managing Director of Reliance Industries, who have their main business grounds in the fields of petrochemical and Oil & Gas. Mr. Ambani has also spread the industry vision to the Retail fields like foods, grocery, footwear, lifestyle, housing, apparel, electronics, and farm implements.

Owing to the Cricket Team MUMBAI INDIANS, Ambanis have tried conversing almost all the major business areas in the country. Heading the company, Reliance JIO Infocomm Ltd, one of the rapidly growing Mobile communication industry. Mr. Ambani is among the top richest people in the world with almost 52% stakes of his in Reliance Industries.

Azim Premji was born in Mumbai (then called Bombay) and currently staying in Bangalore. He is a graduate in Electrical Engineering from Stanford University. He is one of the first and significant members in lending his hand for the foundation THE GIVING PLEDGE, by Bill Gates and Warner Buffet.

An honorary of Padma Bhushan in 2005, Premji was further given the title of Padma Vibhushan in 2011, the second highest civilian award in India for his contribution in the fields of Trade and Commerce.

Azim Premji, is the second richest man of India, is often referred to as CZAR OF THE INDIAN IT INDUSTRY. He is mostly known as the business tycoon of India, currently as a chairperson of Wipro Limited.

Laxmi Mittal was born in Sadulpur, Rajasthan State in the year 1950 on 15 June. He was a traditional Marwari who pursued his Bachelor in Commerce from St. Xavier’s College, Calcutta. Mittal is known as India Steel Magnate, chairman, and CEO of ArcelorMittal. He is popularly known as the STEEL KING. Mr. Mittal is also a proud owner of Karrick Limited and the Co-Owner of a football club with the name Queens Park Rangers.

Mittal has been awarded as the Padma Vibhushan in 2008 for his contribution in the fields of Trade and Industries.

The founder of the company Hinduja Group was Parmanand Deepchand Hinduja, but now the company is proudly owned by his sons Shrichand, Gopichand, Prakash, and Alok.

Hinduja group is the biggest International Company in India, having its headquarters based in LONDON.

This is the main reason why the company is among the wealthiest company in Britain too.

Mr. Pallonji was born in a Parsi family and currently residing in Malabar Hills, Mumbai. Mistry is now an Irish Citizen, who gave the citizenship of India in order to marry an Irish Born National. Mr. Pallonji is an Indian Businessman, a tycoon in the construction field, and the chairman of his company. He also has his shares invested in Tata group which is marked up to at a stake of 18.4%. Pallonji Shapoorji Mistry also owns Forbes Textiles and Eureka Forbes Limited under his name.

Shiv Nadar was born on 14 July 1945 in Tamil Nadu and currently resides in New Delhi. He pursued his bachelor's in Electrical and Electronics Engineering in Coimbatore college. He leads the company HCL in 1976 with just the initial worth of INR 187,000. Nadar foundation of HCL was a major investment in the field of IT industry and paved the way for many to be a part of the Company since then. He was awarded Padma Bhushan in 2008 for his contribution in the fields of IT Industries.

Mr. Kumar Birla born in 1967 in Calcutta was brought up in Mumbai. He completed his Bachelors in Commerce from HR College of Commerce and Economics. He also did his CA from ICAI India. There was also an MBA degree which he bagged from London Business School.

Kumar is an industrialist and the chairman of the Birla Group. Not only is the Industry field where Kumar has spread his interest in, but he is also an educationist. Kumar Birla is the proud owner of Birla Institute of Technology and Science (BITS).

The Company was founded and established in 1897 and has its roots in almost all the major steel sectors of India. The Godrej family was first founded by Pirojsha and Ardeshir Godrej. And now the company is proudly owned and run by the grandson generation Adi, Nadir, and Jamshyd. The company started making locks, in the beginning, looking at the crime rate of the country and thus have an important role to play in almost all the fields. Smith is the third generation down the family running the company.

Gautam Adani was born on 24 June 1962 in a Bania Family in Gujarat. He did his B.com from Gujarat University but was a first-year dropout.

He is an industrialist, founder, and chairperson of Adani Group founded in 1988, and has spread its vast wings in the fields like resources, logistics, energy, agriculture, defense, and aerospace. He was ranked as the fourth most powerful person in India.

Born on 1st October 1955 Dilip Sanghvi resides in Gujarat. He pursued in bachelors in Commerce from Calcutta University. Dilip Sanghvi is the founder of Sun Pharma which manufactures and sell active pharmaceutical ingredients (API) in the United States and India. The company was founded in 1982 with an initial investment of INR 10,000. And now the Sun Pharma Company is one of the largest Drug company of India and the fifth largest Company in the whole world.

Who is the No 1 richest person in India?

Who is the 3 richest person in India?

Who is rich Ambani or Adani?