Play Store is the place you head to for regular updates and install new apps on your phone. However, the availability of books, games, music, movies and Gift cards all in one place are some benefits of Google Play Store known to a few. Play Store has everything that your smartphones may need. It’s secure and safe, however, there are some limitations that force developers and sometimes, users to look for solutions beyond it. The Advantages and Disadvantages of Google Play Store pin out the pros and cons from users and developers’ perspectives.

What are the Advantages of Google Play Store?

It’s easy to search for things you need online, from apps to media; Google is the authenticated space for everyone. Developers are free to host their apps and can improve its performance as per users’ feedback. The following advantages of Google Play Store contribute to the facts why it’s a better-centralized place for developers and users.

1. Developers can host their apps at fair pricing

Google serves as a trusted platform for legit app developers and gets them the opportunity to earn. Google takes 30% of apps and in-app purchases, while 70% of the payment goes to the developers. Google recently halved its cut to 15% in 2021.

2. Grace Period is among commendable advantages of Google Play Store

Developers can give users time, also called a grace period, to resolve payment issues while their subscription remains active. A Grace period can be three days, seven days, or 14 days—this period gives users time to consider whether to cancel a subscription or not.

Whether you are a consumer or a developer, there are a few hassles to buy services from Play Store. Buying a subscription is way easier and cheaper than the services offered at the Apple Store. In addition, you may get similar or sometimes better services that are not found on the Apple store.

Play Store is a place that has strict policies for developers. Not everyone can go and add their apps for customers. There are specific criteria based on which, your app will be evaluated before being hosted for customers. User’s security and protection of rights are admired advantages of the Google Play Store.

If you think Play Store is just for downloading Android Apps, take a look at the Books, Videos, Music, and Movies section. You get to enjoy HD quality content at low prices. There also are gift cards available at the Store, which you can use later to purchase the stuff you like.

What are the Disadvantages of Google Play Store?

Among many pros, there are certain limitations that count as disadvantages of Google Play Store. The controversial move of Washington DC and 36 other US States fired up more arguments over Google’s antitrust practices. Besides those allegations, here are some common problems that users or developers may have to encounter with Play Store.

With the original apps come offshoot apps (usually useless) that make it difficult for users to find the legit one. Google is also unable to produce the best results based on user ratings, pricing, and demographics. For example, if you look for a dictionary app, there are around 100 results, and finding the original one is somewhat confusing. This is the main reason why major companies host their apps on their official websites rather than play store.

2. Android doesn’t allow apps from an outside source

You must be familiar with this problem which may lead to another hassle. By default, Android devices don’t support apps from outside sources or websites. To install an app, you’ll have to allow the apps first. There are many useful apps hosted on other websites that user may not be able to tend to due to permission issues.

The first you need to access Play Store and services is a valid Google Account. If you don’t have one, you won’t be able to get any of Google’s services. Given that android marks apps from unknown sources sketchy, the double turns out to be among the striking disadvantages of the Google Play Store.

There are limited options developers can use to promote or host their apps. Since Google has its own set of T&Cs, developers sometimes fail to keep their standards up to the asked criteria. Plus, they have to make more efforts to attract users so as to incur the commission Google takes from them for every sale.

Google always takes the hit by forcing users to view things they don’t need. With movies, Music, Books, and APKs hosted on a single platform; Play Store becomes more redundant. It’s frustrating enough for users whenever they visit the store for updates or apps; there comes a flood of recommendations from Google.

Final Verdict on pros and Cons of Google Play Store

There are lots of points to consider about the pros and Cons of Google Play Store from the viewpoint of a customer and developer. Users are free to rank and review apps as per their experience. However, the play store is a place where negative reviews may taint the developer’s image and reduce their chance of earning well. The top players can easily outcompete the small ones intently by defaming them as the Reviews section is open to everyone. 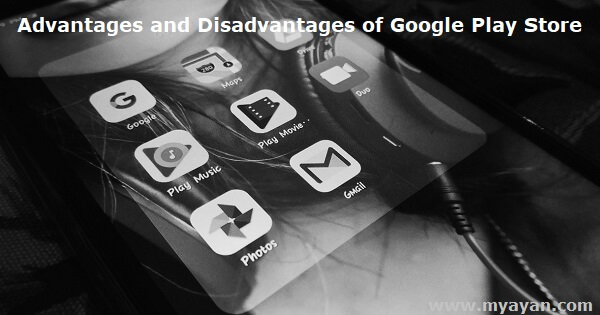 What are the advantages of Google Play?

What are disadvantages of Google Apps?

The fact that Google Apps for Office Services requires Internet access to operate is one of the significant drawbacks. You lose access to vital company software if your connection to the internet goes down.

There are no costs for using Google services like Google Play or Google Drive. You'll just pay for your items, any applicable taxes, and delivery fees.

Android's most significant source of income appears to be mobile advertising, with Google taking a cut from advertisements that appear when users use the Android app and the internet. Many people utilize YouTube, Google Maps, Drive, Gmail, and other Google apps and services.