Advantages and Disadvantages of Android Games 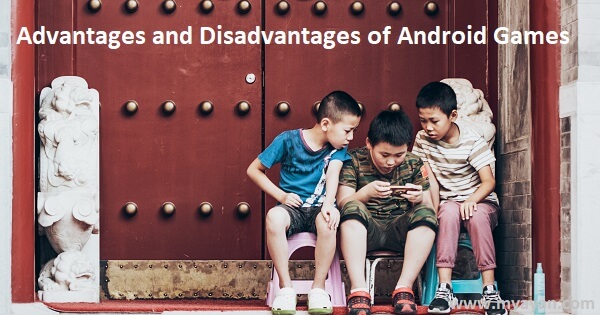 A substantial number of Mobile Apps flood Google Play store every day. From kids to adults, smartphones are the most convenient way to online gaming. Thanks to Google play store offering a plethora of multi-genre games that never cease to amaze users.

How you like mobile gaming and how this affection goes on your health and lifestyle are keynotes of this discussion. Restricting your access to the physical world, mobile gaming turns the table in many different ways. More is highlighted in the Advantages and Disadvantages of Android Games.

What are the Advantages of Playing Android Games?

Where seniors prefer some Best android games like candy crush saga, adventure games draw the attention of kids. Diving deeper into the pros and cons of android games, this segment brings some facts to light.

Play store hosts different sorts of mobile games for kids to grow their problem solving and analytical skills. Quiz Games for Android have some hidden logical element which can boost kids’ learning ability and comprehensibility.

If you are looking for a good company to share opinions, Play Store lets you play Best Android Games with Friends with millions of options. Multiplayer Android gaming also allows you to know your gaming partners well regardless of your geography and language. With a group, it’s easy to crack riddles and stages whether it’s a quest or a mission.

Applying your tactical skills, communicating with your co-players, and leading a team helps you incorporate skills that improvise your perception and behavior. You can devise a strategy with your teammates and brainstorm ideas to solve a given problem that you can also apply to real-life situations.

Android games build your stimulus-response ability better as most games need your attentive behavior in order to score and complete missions. From kids to adults, everyone can experience the positive effects of mobile games. Some of the oldest and Best Android Games Like Candy Crush Saga and Subway Surfers go beyond just speed and mental exercise.

What are the Technical Disadvantages of Android Games?

Sticking too much to your android games can also be risky. If you spend most of your spare time in gaming, these are some cons of playing android games you may come across.

Gaming too often or for too long is more likely to drain your mobile’s battery. This drawback of playing android games is more prominent when connected online. Playing online android games continuously may also downturn your phone’s battery life permanently. It’s time you remember there are other essential purposes to deal with using a smartphone besides just hanging out.

It’s best to frequently check for any junk files in your phone’s settings. If you are not aware of the second most experienced drawback of android games, here is one. Many games like other apps take feed on your disk space and keep clogging on your disk every time you launch it. As suggested, keep a cleaner app on your phone to remove junk files on a regular basis. If possible, clear the app cache or data (It may delete previous scores or records).

Some games use HD graphics and animation that are too hard to handle for your device. Resultantly, your phone may heat up suddenly turning its battery juiceless. The reason why your phone gets heated is probably due to insufficient configuration or incompatibility with the gaming app.

The tactics game developers follow these days is to lure users at first with free android games online, and asking for a paid upgrade later. Even some famous and  Best Mobile Games follow this technique to put users into a dilemmatic state. Once you lose a level or want an upgrade after another, you are left with limited free options and have to pay ultimately in order to proceed to the next level.

This clickbait method is one of the major drawbacks of android gaming today. For every in-app purchase game, you may come across these annoying situations where you are forced to watch a video or promotional app in the middle of the game. You are allowed to continue playing until the video ad ends, which is generally up to 15 or 30 seconds.

Here are the highlights of some feared disadvantages of android games for kids you might notice at some point.

Kids get easily distracted by games and are more likely to heed to their parents. This drawback resonates with many concerned parents as many have reported that kids become less attentive towards their studies because of gaming.

Even the Best Android Games are based on either adventure or racing to add a more thrilling element. Many kids opt for games like these instead of the ones offering creativity and learning methods. Such android games promote impulsive behavior among kids turning them more impatient.

Most parents don't know about the type of android games that are unsuitable for their kids. Android Games are an easy way to trigger violent behavior among kids since there are thousands of war games that openly display and encourage killing for points.

More time into gaming is less time in reality. Not only kids, but this negative effect of android games applies to adults too. Prolonged exposure to mobile may shut your interest in the outside world.

Also Read: Positive and Negative Effects of Internet on Students

What is the disadvantage of playing mobile games?

In many incidents, it has been seen that android games negatively affect kids' mental growth. Most mobile games these days serve violence as an element to attract users. Playing android games for hours may also arise visionary problems.

Is gaming a waste of time?

Mobile games can't be blamed entirely as many game developers provide learning and educational content for kids through Android apps. Let's keep in mind that fun methods are the best to help kids learn.

Is playing games bad for your phone?

Playing mobile games for more than an hour can heat your device, drain its battery faster, or even shorten its life permanently. Heavy android games are also known to consume disk space and slow down CPU speed.

Does PUBG damage your phone battery?

PUBG is an online multiplayer game that takes more system resources than a usual android game. PUBG also features high-end graphics that consume more battery and CPU, you might need a power source to continue playing PUBG after an hour. However, there are still no concrete relation between PUBG and battery damage.