Advantages and Disadvantages of Drones

Drone technology is immensely assistive to humans in almost every sector. Who would have thought that one day an Unmanned Aerial Vehicle (UAV) would be so useful, be it defence system or agricultural purposes? As more and more businesses are utilizing drone technology, eCommerce and healthcare sectors are planning to incorporate drones for society’s good. But one man’s tool is another man’s weapon. Some concerns are enough to speculate the Advantages and Disadvantages of Drones as the technology progresses.

What are the Advantages of Drones?

It’s the advantages of drones that experts believe these aerial vehicles will be helpful in the Healthcare sector, construction sector, and emergency response services. Some of the major pros of drones are as follows.

Controlled remotely, drones are small enough to fly over the areas where humans can’t possibly reach. UAVs are a safe way to monitor locations that are otherwise vulnerable to possible hazards.

Monitoring dangerous sites is one of the greatest advantages of drones in military operations, as it may save many soldiers from casualties. Drones can also ensure worker’s safety, especially in hazardous situations like radiation monitoring, inspecting high-voltage lines.

2. Affordability is one of the main advantages of drones

Drones are not limited to defence systems; UAVs are a common tool for businesses. This technology comes at an affordable price which is under $500. You don’t have to have a pilot’s license to fly a drone; you need to have specialized skills. If you want drones with advanced features, they are also available at an affordable price.

The drone is more economical to buy, and you don’t have to worry about running out of fuel as rechargeable batteries power it. No maintenance and no cost of refilling sounds like more advantages of drones over helicopters and planes.

Aerial photography is one of the fun and unique ways to capture images. Drones, when used with HD cameras, better the image and video quality. Also, it gives a new dimension to imagery. Drones are widely used in the film industry because they add more creativity to videos making them more entertaining.

Drone photography is a great tool to accumulate accurate information about particular sites such as mines, rivers, forests, and radioactive sites. The data gathered by drone cameras can further be used for research and to identify hazardous elements in disaster-prone areas.

As said above, Drone technology has transformed ways of conducting business. As mankind drives more towards modernization, Drone technology will have numerous applications in daily lives. Amazon has already announced to use of Drone technology to ship consumer products. The renowned eCommerce giant will use the Prime Air Delivery system for users in future.

The system guarantees to deliver the package (up to 3 kg) to the delivery destination within half an hour. The Amazon drones will be limited to fly up to 25 km range. An express delivery system is something the American users were keenly waiting for.

Drones are of great use in agriculture as farmers can use them to monitor crops and protection from wild animals. Crop diseases and infestation are the worst of nightmares for farmers. Drones can be coupled with sprayers, cameras, and even speakers to drive wild animals away from the farmland.

Walking through fields and keep an eye on all the activities is almost impossible for anyone who owns hectares of space to cover. The drone technology not only saves time but also saves resources used in Agricultural activities. Apart from businesses, the Agriculture sector will have numerous advantages of drones.

What are the Disadvantages of Drones?

Drone technology will bring many benefits to businesses and society. However, from user privacy and safety to legal issues and unfair use, many factors contribute to the disadvantages of drones.

PRIVACY - While drone's benefits are endless, drone technology has several downsides to it. UAVs can quickly fall prey to manipulation and trespass a group or individual's privacy. Though many desire to utilize drones for retaining safety, it could violate numerous individual liberties in the name of public security.

Even though UAVs or drones are used for various purposes, there are still concerns about their misuse and abuse. These concerns are why many state law authorities still have rules for the regulation of drone use. Laws for Property protection from aerial trespassing are still in the making.

Thus, UAV technology functions in a judicial grey zone. There are flaring arguments between governmental regulations and any state or city laws to manage airspace property rights. Since a drone pilot can fly anywhere, many people may not like the idea of being watched by the unknown.

2. Short Flight Time is one of the major disadvantages of Drones

Drones operate on rechargeable batteries, that means; it can’t cover long distances. Given that a drone can fly for as long as 30 minutes, the travel time is further shortened in case of strong winds.

Short flight time is one of the major concerns for users as the same counts as the biggest disadvantages of drones. Drones may go up to kilometres within 5 minutes, but that has to return to its original location, which is also time-consuming.

Lithium-ion batteries, sensors, weight, and atmospheric pressure are too much to bear for a drone. In addition, an inexperienced pilot may be more dangerous as they have to avoid possible obstacles in mid-air.

Software or hardware malfunctions come as the biggest cons of drones that carry ammunition as it may cause numerous casualties. Drones are still in the process of improvement to limit accidents that can compromise the safety of human lives.

Drones are reliable as long as the weather is clear and shiny. The UAVs will not be a good option to deliver products in case of stormy or windy weather. Given that Lithium polymer batteries are very sensitive to moisture, flying drones on rainy days impossible. This problem is much of a hindrance for eCommerce businesses, and they have to consider using delivery trucks.

Also, the field view is blocked by foggy conditions, which makes it difficult to fly a drone. Fog reduces the visibility and has tiny water droplets bad enough to falter the batteries of the drone during the flight.

5. Drone technology can be hacked

Vulnerability to hackers is one of the major disadvantages of drones, whether it's military operations or business use. Drones run on programmed instructions and algorithms. The navigation and flight operations are only possible because of the internet system.

Conclusion on Pros and cons of Drone Technology

Drones are expected to dominate every sector in the coming years. Given their uses, these small aerial vehicles will find their applications in different areas apart from the ones mentioned here. But the society has to deal with the pros and cons of drones and determine how to best use these technological marvels. Besides reaping the most out of this technology, it’s also considerable to work on the limitations of drones. 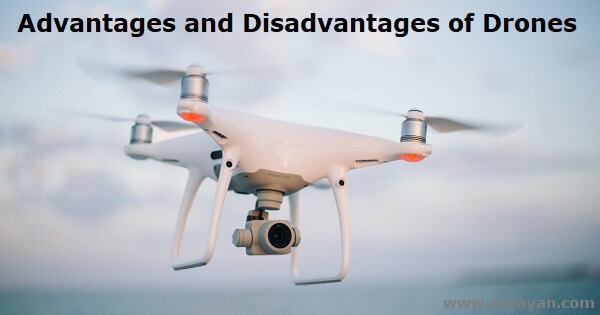 What are advantages of drones?

They may assist law enforcement. The authorities can look for missing children, provide tactical surveillance and suspect tracking, aid accident investigations, and keep track of big gatherings. They may help in the maintenance and management of safe infrastructure.

What is a disadvantage of using a drone?

There is much to like about drones, but there are also a few concerns connected with them. Drones have several advantages, but they can also be dangerous to airplanes.

Why are drones bad for the environment?

Drones may negatively influence wildlife if they're used in areas that are prohibited. For example, according to EcoWatch, it is illegal to fly drones over US state wildlife reserves because they disrupt the animals and habitats.

What are problems with drones?

Privacy is a major issue for UAVs. Drones may gather data and pictures without drawing attention, which has led many Americans to worry about their Fourth Amendment right to privacy. This might happen if the government used drones to keep an eye on the general public.

What are the challenges of using drones?

The flight time is significantly shortened when its load is increased. The cost of flying drones may be greater than that of ordinary aircraft, but the payload and ranges are much better. Drones also have to deal with airspace restrictions, making it more difficult for them to fly in some places.