Advantages and Disadvantages of Flying Cars

Flying cars as a transportation system are foreseen as an eco-friendly and economical means by many auto companies. Lower emissions, less traffic, and ease of use are some factors that make users believe what would “flying cars of the future” be like? As debates continue, the Advantages and Disadvantages of Flying Cars inspect how the benefits and problems with flying cars come up.

What are the advantages of flying cars?

The prototype of a flying car flew between two airports in Slovakia. The test flight was worth 35 minutes flying at 8,200ft at 115 miles per hour. The test flight turned fiction into reality what it means for the future, though. How are flying cars going to be beneficial? There are many advantages of flying cars as the technology shapes future, say experts.

New York is among the cities with the worst traffic, especially in peak hours. If you are one of the commuters tired of getting late, an aerial route is the best option you’ve got. Flying at 100+ miles an hour will not only save your time but also boost your work efficiency.

Moscow, Mumbai, Delhi, Bangkok, and Bogota are some cities that have earned a lot of reputation for traffic jams and snarls. Flying cars benefits will be palpable in places like these where you’d be able to reach your destination within minutes.

2. Lower Emissions is among the key advantages of flying cars

Each vehicle contributes to environmental pollution given that it runs on gasoline or other Fossil fuel. It’s predictable the rate of damage being done by millions of vehicles on the road. Not only space but fuel emission are also the leading concerns of modern society.

The emitted gases and elements include Carbon Dioxide, Carbon Monoxide, Sulphur Dioxide, etc., which are also the major pollutants. With Flying cars, there will be less traffic on roads and efficient use of fuels and energy sources.

3. Flying Cars would cover the same distances in less time

Cutting traffic hours, 8200 feet above the ground, touching around 115 mph, flying cars would shorten travelling the same distance. The distance will not be the same as you won’t have to drive through streets and bends of the roads.

Considering lower emissions and greater efficiency, Flying cars will follow the simplest aerial route from point A to B. In addition to that, there are no traffic signals and police to charge you a ticket.

4. More freedom for Pedestrians and cyclists

Less traffic on roads encourage pedestrians’ movement, but it will also reduce the number of accidents. With wider bike lanes and pedestrian boulevards, dwellers will have a more pleasant and healthy place to live and work.

5. Government can save investment in ground infrastructure

The projected value of the US Highway and street construction industry by 2024 is $107 Billion. Therefore, states have to invest more to put workforce to maintain them even after construction completes.

With increasing numbers of cars on major highways, roads are being widened, with more lanes added every year. Cutting more woods and laying asphalt roads also destroys vital habitats for wildlife. If flying cars don’t require this infrastructure on the ground, there will be no need to put money and wildlife at stake.

What are the Disadvantages of Flying cars?

When there are Technology and modernization involved, there exist contradictions. There are many potential disadvantages of flying cars as the technology progresses and much of it is uncertain.

1. Cost is one of the common disadvantages of flying cars

Flying cars will be highly expensive and probably out of the reach of commoners. Let’s rewind the flying test; the same flying car that travelled at 8200 Feet, 115 MPH, took around 2 years and more than $2.5 million to ready.

Not only will this mode of transportation be expensive, but also it will require a trained driver who can fly it as a professional mini jet pilot. However, given that Flying cars are in their infancy, the manufacturers will likely reduce the price in future.

2. Emissions over short distances could be higher

Just like an aeroplane, flying cars would consume more energy during the take-off and climb phase of the journey. This means that there are more disadvantages of flying cars for short trips than the benefits in terms of energy use and emissions.

Although flying cars are promising over longer distances due to their efficiency in the cruise phase, the short journeys could lead to even higher emissions than existing transportation options.

Flying cars are conceptualized for personalized use, just like James Bond Movies. However, there are still no considerations of whether flying cars for public transport will be safe or not.

Flying cars must be lightweight to cover more distance and accelerate faster to take off. These factors are the leading reasons to make future cars more energy efficient. But one of the leading disadvantages of flying cars is they can’t be used for public transport.

Given that a flying car takes off and land on the ground from somewhere, these futuristic cars would need dedicated take-off and landing zones. That said, you won’t be able to just fasten your seatbelt and take off in front of your home. There are several things to consider, such as buildings, cables, and trees.

Flying cars would need to drive to a specific place to take off (usually, open areas) and land. This need for such establishments will reduce the benefits of flying cars as the same would require investment, planning, materials, and space.

5. Malfunction would be fatal

It won’t be surprising to know where you will land if your car breaks down. Hitting the ground directly is one of the fatal disadvantages of flying cars. Such unprecedented threats still raise concerns over the use of flying cars.

To overcome such limitations of flying cars, manufacturers have to ultimately develop a contingency plan before launching the vehicle for public or personal use.

Conclusion on pros and cons of Flying Cars

The concept of flying cars may appear like a sci-fi movie, but it’s happened in real in Slovakia recently. Considering the pros and cons of flying cars, it’s easy to speculate how are flying cars helpful? And why flying cars are a bad idea. The reality, however, is they will be restricted to a limited use even in the future. Meanwhile, railroads, highways, and waterways will tend to remain as a reliable mode of transportation. 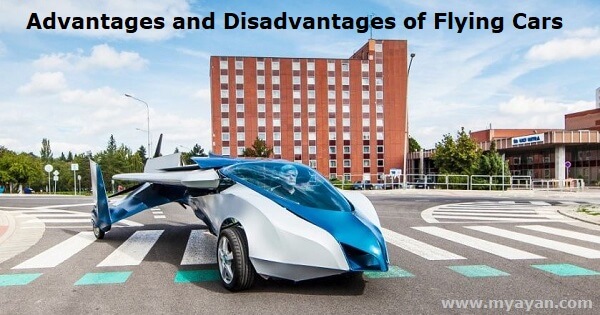 What are the disadvantages of a flying car?

Since they can only accommodate a small number of passengers instead of other forms of public transportation, they are not as popular. In addition, these flying cars must be lightweight to take off without requiring too much power; therefore, they are only designed for small groups of individuals.

What is the use of flying cars?

Flying vehicles might aid in the reduction of traffic congestion and road-based emissions, as well as lowering accident danger. However, a more immediate application for flying cars may be to enhance emergency services such as ambulances, fire engines, and so on.

Are flying cars good for the environment?

When a single pilot is carried for 100 kilometers, or roughly 62 miles, in an electric vehicle with flying wheels, the carbon footprint is 35 percent lower than conventional automobiles. Moreover, flying electric vehicles proved to be even more efficient when carrying three passengers and a pilot for the same distance.

The flying car's price should be appealing, particularly given the vehicle's high-tech features and luxury amenities. The manufacturer has announced that its model will be available in 2020 with a price range of $1.2 million to $1.6 million.