Advantages and Disadvantages of Pesticides

Pesticides are important for farming as they provide safety to crops against various pests, insects, fungus, etc. Pesticide chemicals are known by different names depending on their concentration level and applications. Insecticide, Avicide, Bactericide, Fungicide, Rodenticides, etc., are all different types of commonly used pest-control methods.

Although pesticide chemicals are essential for crop protection, yet there are debates on its use. Various researches show different risks of pesticides on humans, but significant complications are found in children causing Neurodevelopmental defects. The advantages and disadvantages of Pesticides examine the positives and negatives.

Nearly 1.8 billion people engaged in farming activities use Pesticides to protect their produce. Over 1 billion pounds of pesticides are used in the United States each year and approximately 5.6 billion pounds worldwide. Many people pesticides for lawn and garden, Grocery Stores, and in & around their homes.

The recent outbreak of Mice in Australia raised the alarm for farmers as they fear it could lead to plague and turn into an epidemic if not controlled. In situations like these, pesticides are highly advantageous.

What are the Advantages of Pesticides?

Humans and animals need food to survive and the hungry world can only be provided with sufficient food if the crops are protected and are produced on a larger scale. Wherever there is food, other organisms start feeding on it and make it unsuitable for humans, that’s considering the advantages of pesticides should be worthy.

Whenever any microbe attacks a crop, the crop's self-immune system fights it, and a lot of energy is wasted to overcome the effect, which reduces the growth of plants. This decreases overall crop nutritional value as well as the total yield of crops. So to ensure good quality and protect crops from being eaten away by weeds using pesticides is a great option.

As far as the cost is concerned, there are economic advantages of pesticides as farmers can save their crops with a little investment. Some studies state that the crop yield after using repellent gives profit up to four times the cost of used pesticides. Increasing production proves to be more economical than situations where weeds and microbes damage a huge portion of crops.

3. Protection of humans from fungal and bacterial diseases

It is also seen that by protecting crops, many microbes are killed, which can cause infections and diseases to humans. So this is an extra advantage that protects the human race from many bacterial and fungal allergies and viral diseases. It also kills various other organisms like mosquitos which prevent the spread of bird flu, Anthrax, Avian Flu, etc.

A major problem faced by farmers is the storage of crops and other resources. But the shelf life of these chemicals gives them the advantage to be stored in bulk quality and still be used for many years. Unlike crops and food resources, they don't need any protective environment for storing them safely.

The usual time taken by pesticides is a lot quicker than other organic and methods; pesticides tend to act instantly on the microbes killing the external threats infesting the crops. It means that they are specifically formulated to eliminate most crop-damaging insects and weeds. This increases the overall quality of the yield and maintains its nutritional value.

What are the Disadvantages of Pesticides?

Since 1960 the use of pesticides has proved more beneficial than any other pest control method. But the actual amount of pesticides needed by crops is less than 5% of the total amount used, and the rest stays in the soil and gets transferred to groundwater. Many other disadvantages of pesticides uproot questions on the use of these chemicals.

1. Disadvantages of Pesticides on Human Health

By continuous use of chemicals to prevent crops, the food is also added with toxic chemicals. Also, the farmers are at risk while using and handling various concentrated forms of chemical solutions meant to increase their yield. Moreover, various health problems are found in humans due to the use of pesticides in crops. Many pesticide chemicals also lead to different types of cancers in humans.

The sprayed chemicals kill various crop-damaging insects. Unfortunately, along with them, it also endangers other life forms like bees, butterflies, and soil-enriching organisms, which are helpful for crops. As the pesticides are not specific about repelling pests, it kills all microorganisms in its application area.

After its utilization, the different pesticide used remains in soil which causes soil pollution, and underground water also gets polluted due to its use in high quantities. Moreover, some farmers use excess amounts of pest repellents, increasing their residues going into the ecosystem and polluting the environment.

Bees and butterflies act as natural carriers of seeds while moving from one plant to another. But the use of synthetic chemicals hinders various natural phenomena like pollination affecting crop yields.

The continuous addition of chemicals to increase yields increases its amount in the soil as the environment. It causes land degradation and can have negative impacts on soil fertility in the long run. Humans are yet to discover the exact disadvantages of pesticides as the chemicals are causing the soil's fertility to deteriorate.

Conclusion on Benefits and Risks of Pesticides

With the widespread use of advanced technology, humankind has found sustainable ways to grow healthier crops through GMOs. The food grown through Genetic engineering is expected to meet the nutritional needs of the growing population.

The researchers are continuously working in this field to better the traditional agricultural methods, and the world may have better techniques for crop protection in the future. 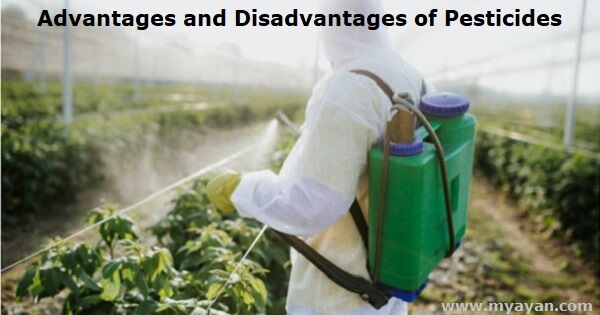 What are the disadvantages of pesticides?

What are three benefits of using pesticides?

Herbicides, fungicides, and insecticides are the three most common types of agricultural pesticides. Herbicides keep weeds at bay so that crops may grow without competing for vital minerals, space, water, or sunlight. Fungicides protect plants from disease-causing organisms such as fungi and bacteria that can spread rapidly and cause devastation to fields of crops.

Do the benefits of pesticides outweigh their disadvantages?

When the drawbacks of pesticides exceed the benefits, farmers frequently turn to alternative pest control strategies, with biological pest control being one of the most popular. The most apparent advantage of this technique over pesticides is that the natural balance in the ecosystem is largely unaltered.

Do pesticides dissolve in water?

Some pesticides are highly soluble in water, just like sugar and salt. They dissolve quickly. Highly soluble pesticides can flow with the water in the ecosystem and travel downstream and through the soil.

Do pesticides stay in the soil?

In most cases, a pesticide's half-life would be anywhere from a few hours to four or five years in an agricultural setting. Bacteria break down most pesticides in the soil; therefore, conditions limiting microbial activity (cold, dry weather) will extend the amount of time they remain there.