Have you ever tried to use a Rooted mobile? Or are you considering rooting your android phone to enjoy the superuser access? You can tweak and customize your smartphone as you like once your device is rooted. But there are some risks involved that can permanently damage your phone if rooted incorrectly. The Advantages and Disadvantages of Rooting Android Phones illustrate the pros and cons further.

Rooting refers to ‘unlocking’ your smartphone’s OS, which also gives you superuser access. Being a superuser or administrator, you can delete the pre-installed apps, customize the theme, and edit the device software settings, which are generally inaccessible to common users. You can also change the way software behaves according to your specific requirements.

What are the advantages of rooting android Phones?

Rooting brings you the power to control how your smartphone behaves, secure the data, and tailor its software as you need. Many users perform this risky operation since there are many advantages of rooting android Phones.

1. Customization is one of the significant advantages of rooting android phones

Most android phones come with pre-installed settings, which a user is a restricted control or tamper or even access. Manufacturers do so to prevent any damage to the device’s software from the user’s end.

The best part of rooting your smartphone is if you know what you are doing, you can customise many features of your smartphone, such as altering themes and graphics or editing the settings of a particular app.

These days, every phone you buy comes with preloaded apps, which are rarely any use. These apps take up much space on your Android phone. In addition, many smartphone companies have agreements with app developers to sell their apps through android devices.

With a completely customized OS, Rooting lets you choose which apps to keep and which to get rid of. Once you know to root your Android phone, you can get rid of all those apps.

Generally, android devices restrict users from downloading apps from untrusted sources. Also, the lack of trusted platforms such as Google Play Store is the biggest problem. Freedom to download apps from anywhere on the internet is one of the biggest advantages of rooting android phones. Rooting allows you to access any website you want so you can install the apps without any hassles.

Getting rid of unwanted apps means saving your phone's battery. Rooting your android phone lest you install custom ROMs and remove unwanted apps known as bloatware. That said, you can better manage your phone battery life with apps built specifically for rooted phones.

You can also install certain apps that run on a rooted device only. With those apps, you can enhance the phone’s capability and enhance your phone battery life.

Having superuser access to system files is one of the major advantages of rooting android phones. As you root your android phone, you get access to several files, segments, and parts that are otherwise not available.

Having access to do what you want with your device is the prominent reason why many users look for rooted smartphones. You can use existing apps in the best way or tweak your device to get many other apps for rooted devices.

What are the disadvantages of rooting android phones?

Rooting your android phone is like a roller-coaster ride as with some benefits come some assured and possible disadvantages of rooting. Rooting means tampering with your phone’s default settings and manipulating them according to your needs. Your phone becomes more vulnerable to several risks.

1. Permanent Damage is one of the dire disadvantages of Rooting Android Phones

You need to have in-depth knowledge of rooting and how it’s performed. You’ll have to follow every step involved as you tether your device to the PC while the rooting process is in progress.

Given that each Android model has a different rooting process, your smartphone may take longer or shorter than usual to root. A little disruption during the rooting process can make your phone unusable permanently.

2. Rooting can deteriorate your device’s performance

Users’ main purpose of rooting their android phone is to enhance its performance and extend its battery life. However, some users who root their phones to speed it up or add additional features find their devices lose performance speed and features.

In the worst-case scenario, your phone’s battery may also deteriorate. Such situations may lead to many disadvantages of Rooting Android Phones.

Even though rooting is not illegal, many device manufacturers do not approve of it. One of the major disadvantages of rooting android phones includes warranty violations.

Companies would not want someone to tamper with the default device settings and get access to root files. This not only puts your phone at risk of losing data but also immediately voids the warranty; this means, whatever happens to your device after that, it’s your responsibility.

4. Vulnerability to malware and hacking

Freedom to download any app from any source doesn’t always mean a happy ending. You might gain access to plenty of apps and features, but that also means you are at risk of malware or hacking attack.

You don’t always know which apps are trustworthy and which aren’t. Some apps might contain malware and steal sensitive data like login credentials, passwords, or even financial details.

5. Update issues are among the common risks of Rooting android phones

Rooting voids your phone’s warranty; as the root files are altered through rooting, you may not be able to install the recent updates for your phone. The concerning disadvantage of rooted devices is that the system update may not happen once the files are exposed.

You may find that automated firmware updates may not be working anymore. In many, updates will not install due to software modifications made during the rooting process.

Conclusion on Advantages and Disadvantages of Rooting Android Phones

Make a thorough research before you root your smartphone as risks outweigh the benefits of rooting android phones. It’s worthwhile to understand The Advantages and Disadvantages of Rooting Android Phones before proceeding.

Only after understanding the risks involved can you make an informed decision on whether it is worth the hassle and risks or not. Make sure how much you know about rooting smartphones and what state your phone is in. 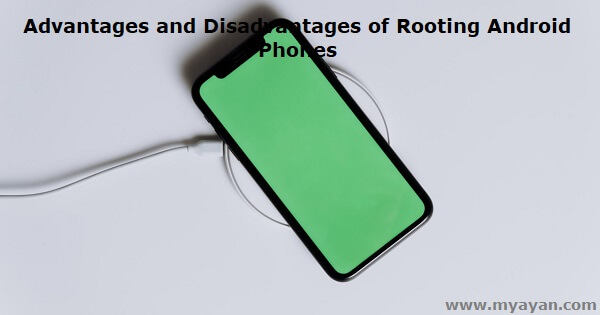 Can root damage your phone?

Android's restrictions on user profiles make it difficult to damage the system with a limited profile. On the other hand, a superuser may really trash the system by installing the wrong program or making modifications to operating system files. Android's security model is also weakened when you have root access.

Can I Unroot my phone after rooting?

If your phone has been only rooted, it's somewhat more complicated to unroot: Unrooting should (hopefully) be straightforward if all you've done is root your phone and stay with the default version of Android. The SuperSU app allows you to remove root and replace Android's stock recovery using an option in the menu.

No, data is not lost when you root your phone. However, if you get a boot loop (unlikely but does happen), it's always a good idea to backup your data on the cloud or your personal computer before beginning the rooting procedure.

So by rooting your device regularly, the manufacturer's warranty is voided permanently, but you may revert to stock Android on your device at any time.