Advantages and Disadvantages of Samsung Phones

Samsung phones dominate the US Smartphone market share, which is evident which smartphones users prefer to buy. Samsung phones are one of the most popular smartphones on the market and for a good reason. They have a wide range of accessible features that offer everyone, whether students, businesspersons, or freelancers. Of course, you can't go wrong with your devices, but exceptional circumstances may push you to consider the advantages and disadvantages of Samsung phones.

Samsung Phones are excellent phones used for a variety of purposes. They provide the best camera technology available on any phone, and you can compare their cameras to some of the top digital cameras on the market. They also have the best screens, cutting-edge technology, and they are thin yet powerful.

The Samsung Galaxy series of smartphones has been one of the most popular globally for several years. With over a billion units sold, Samsung is far and away from other smartphone brands.

What are the Advantages of the Samsung Phone?

Samsung has many different models of phones, but the Galaxy Series is one of the best. It is waterproof, which means that you can use it in the rain or even when swimming. It also has sharp camera features so that you can take excellent pictures. Other features are literally added advantages of Samsung phones which are mention-worthy.

Samsung Galaxy series is known for its excellent camera. The advantages of having a good quality phone camera are endless, from capturing all those special moments to adding filters and editing features when necessary. As a photojournalist, you can make the best use of Samsung smartphones when you don't have access to your DSLR camera.

Samsung smartphones offer something to everyone. The screen on Samsung phones is one of the best available. It is bright and has a high resolution with an impressive color depth. The screens are usually larger than other phones, making browsing easier and swiping across them fast when scrolling through your favorite websites or apps.

Wider resolution screens can also be helpful when watching videos or viewing pictures. If you love to binge-watch your favorite web series or shows, Samsung phones are the best to better your experience.

Water and dust resistance is the unique feature of this phone. This means that you can submerge your phone in water or cover it with dust without any damage. It is also perfect for people who have their hands on their phones frequently. Since there's no need to worry about exposing your phone to water or dust, Samsung phones have become the best alternative to some expensive brands.

4. Large Screens are the common advantage of Samsung Phones

Even if your budget is too tight to afford a smartphone, buying one with a large screen is one of the main advantages of using a Samsung phone. The ergonomics are also very good, and you can fix a fair deal for yourself. Unlike other phones, Samsung has taken into account that people want to use their phones with one hand.

With Samsung phones, you can swipe up or down anywhere on the screen to scroll through your photos, messages and more. There are also features like quick launch, so you don't have to unlock your phone every time you open an app.

One of the main advantages of Samsung smartphones is that you can do more things simultaneously. The recent models of Samsung devices let you multitask by switching between apps, which saves time and frustration in the long run.

With the split-screen mode on Samsung phones, two apps are shown side by side, so it's always easy to copy text from one app into another without losing your current task or exiting an app completely. Samsung phones also sport features like multi-windows if you want to use multiple social media accounts simultaneously.

What are the Disadvantages of Samsung Phones?

Even though flaws are rarely found in a Samsung device, every technology-based product has its own set of drawbacks. You should be aware of several disadvantages of Samsung phones before buying them online or offline.

One of the disadvantages of Samsung phones is that the battery life is not quite as good as possible. That being said, smartphone companies have been doing a lot to improve battery life and make it better. Higher resolution, HD picture quality, processing speed, refresh rate, etc., may sound perfect for users, but that also strains your phone batter. Ultimately, your Samsung phone will drain faster.

One of the Disadvantages of Samsung Phones is that they are expensive. The cost issues have sprouted many competitors of Samsung such as Huawei, Oppo, and Vivo offering similar or better makes of smartphones to users. Samsung is also not as popular with many people because many view them as 'outdated' phones. How expensive it can be to get a replacement after the warranty is over.

Samsung phones are bulky and clunky, which is a major drawback for some users. Because of this form factor, they are not that comfortable to carry samsung phones in pocket or handbag, unlike iPhone.

Another problem with Samsung smartphones is that you have to purchase additional equipment in order to use it optimally, such as a protective case or screen protector and back cover or cases.

4. Need a lot of space and power to run

Samsung phones can be a great choice for gamers, business professionals and those dealing with large files to manage. However, casual smartphone users may find their phone has not enough storage.

Even if there is one available with a large data storage capacity, it's very expensive to own. This limitation of Samsung phones sometimes leave you wondering in considering your data storage requirements.

5. Lack of Rooting Support is among major disadvantages of Samsung Phones

Rooted Smartphones are what developers keep an eye on to modify and customize their phones per their needs. Unfortunately, most Samsung phones don’t support rooting.

This problem can turn out to be one of the major disadvantages of Samsung Phones if you have already purchased one without prior knowledge.

Conclusion on Pros and Cons of Samsung Phones:

Samsung phones are one of the most sought-after brands on the market. And it’s not hard to see why, with their sleek designs and cutting-edge technology. But what if you want a different brand? There are lots of brands with better smartphones to suit your needs. However, keep the facts in mind and opt for a trusted smartphone company. It's better to go through user reviews first before you head to buy one. 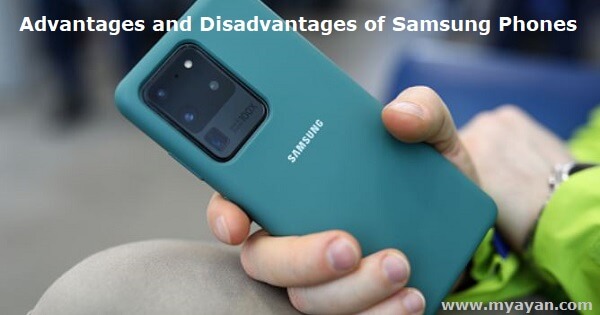 What is the advantage of Samsung phone?

Samsung's most recent crop includes the excellent Samsung Galaxy A50 and the stunning Samsung Galaxy S21 Ultra. The greatest smartphones produced by Samsung are among the finest made by anyone. However, Samsung isn't just a high-end phone maker. It also creates some of the best Android phones available at every price range.

Why Samsung phones are heavy?

As a result, big phones became more popular. The screen size has been growing over time, resulting in larger devices. Metal and Glass are the most common materials used. Glass and metal are heavy items. Batteries have gotten bigger and thicker, adding to the device's weight.

Samsung keeps coming up with the best new technology because it puts great value on its employees and actively seeks unique skills wherever it can find them. It has also made keen early investments in Russia; it seeks particular advances.