There are different types of topologies having their uses and application from households to industrial scale. Out of those, Wireless Mesh Networks are widely in use due to their prolonged benefits and flexibility. The network works with more efficacy and network coverage as compared to other network topologies. Be as effective as it may, can there are any limitations of Meshing WiFi? These Advantages and Disadvantages of Wifi Mesh Network scour further sides.

What is a Wireless Mesh Network?

Mesh refers to anything that is interconnected; thus, a mesh network is a network interconnected with devices or nodes through WiFi Routers, Wireless Mesh clients, and gateways. All these components make up the mesh topology to enhance network speed better strength. Due to its structure, it is also often called wireless ad-hoc, self-organizing, or multi-hopped networks. In the mesh network, two nodes communicate directly or through other nodes on the path or route.

What are the Advantages of WiFi Mesh Network?

Mesh Wireless Networks are a great way to enhance wifi coverage to a larger area of your home or office. There are plenty of reasons why people opt for Mesh wireless networks. These often turn out to be advantages when used in larger homes and workplaces. Some factors why to consider Mesh wifi Network for your home are as follows.

It’s 21st-century technology that can be incorporated into smart homes, smart cities, and even Agriculture. Since the network is extendable through nodes and wireless routers, mesh wifi networking is excellent for enhancing radio signals through parking lots, schools, university grounds, business parks, etc.

You can control your home lightings, ACs, using Mesh Wifi-enabled nodes connected from anywhere. On the other hand, Wireless mesh networking is also greatly assistive in agricultural activities. Farmers can track sun exposure and water levels in the crops using mesh-enabled nodes across the farmland.

Riddance of complicated LAN Applications such as cables, connectors, and NIC Cards can be one of the notable advantages of WiFi Mesh Network. For example, to connect eight computers through LAN, you’ll need different NIC Cards, cables, switches, and connectors. Don’t forget these implementations also come at an expense.

In case of a fault at the end of any nodes, the entire network affected. There may be a little effect on the remaining nodes. This advanced capability of Mesh Wifi Networks makes this topology more likeable. Users can continue using the uninterrupted internet without losing their personal or official information during the transmission. There may be an interruption in the area where a node is a glitch. The good thing is that another node in close proximity will restore the coverage issue immediately or after some time.

The Mesh Network will stay up unless all the nodes connected with each other go down. Provided that the network is least affected by one or two faulty nodes, the mesh wireless network is capable to reroute and recover from the shortcoming.

Cited as the future of Networking, Mesh WiFi Networking can extend the coverage whenever and however you need. The devices connected in a mesh network can retransmit the signals and connect to the other devices to ensure the signal strength remains unaffected. Nodes can connect thousands of sensors over a wide area, they are efficient at finding the most optimal way to send data through to/from the new devices across the network.

What are the Disadvantages of Mesh Wifi Network?

Although the network based on Mesh topology is high on performance and easy to maintain, it can turn more complicated and advantageous. The following Disadvantages of Mesh Wifi Network are the most common users may face.

Adding nodes, configuring them, or removing them is pretty easy but implementing a mesh network from the ground up is much more complicated. Setting a mesh WiFi network can take both time and intelligence compared to other traditional networks.

Given that mesh networks are highly scalable, and adding a node to the network typically isn’t a very involved process. Planning is the key while setting up a network based on mesh topology. One needs to install nodes within a considerable range with higher latency.

Latency is a measure of the delay in a network; it’s the time taken to transfer the data from source to destination across the network. For example, you need a particular light to turn on faster than it currently turns on. You’d need to add another dedicated node that only forwards messages. But adding another means, you’ll need another equipment to take the messages forward only.

Latency is the time taken by a message to travel from source to destination. Latency can be the issue in smaller areas with limited power, bandwidth, and memory. Due to low memory, the nodes may face difficulty transmitting the messages across the network and may result in poor latency.

Each node acts as an endpoint to send and receive messages across the network. The regular workload does need a lot of power to keep the nodes active 24/7. The problem can be surprisingly troubling if a node isn’t wired into a power system directly.

Besides sending messages, each node acts as a router hence making the system more complex. The data passing through each node increases exponentially as another becomes faulty.

Wireless Mesh Network is the new catchphrase that is often spoken about when it comes to building smart homes, for example, Google Homes. Mesh networks have plenty of benefits, and it’s easy to find a real-life example of the networking technology around you. But there are downsides to the Mesh WiFi network too. If you do decide on a mesh network for your home or office, consider preparing a proper plan, power mechanism, and estimated costs at first. 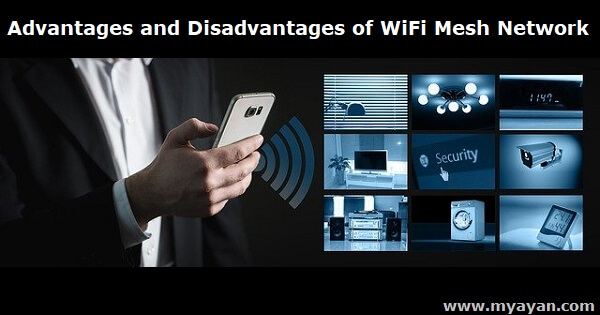 What are the disadvantages of mesh WiFi?

While a mesh WiFi router system does have a few downsides, the biggest one is that you need to keep routers plugged into outlets in multiple rooms of your home. This can be a challenge if you live in a small apartment or an older home with limited outlets. Having WiFi routers scattered throughout your house can also be a little daunting.

What are the advantages of a mesh network?

Is mesh WiFi bad for you?

Mesh Wi-Fi signals are not harmful, even though there are extra Wi-Fi nodes in your home. Most electronic technology uses radio frequencies, which are not enough energy to become harmful to you and your family.

Is it worth getting mesh WiFi?

Mesh routers are a great choice for anyone looking for Wi-Fi coverage that is fast and reliable. Not only do they offer a smoother experience, but they can also help boost signals in areas where a traditional router may not be as effective.