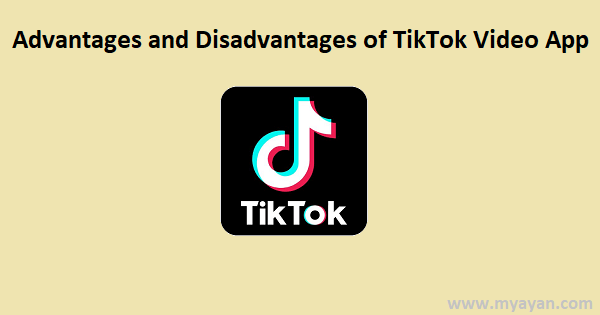 Let’s weed out the hippy-dippy stuff about what Tik Tok Video App is and what it does. Tik Tok app is something every teenager talks about these days. With TikTok having 800+ million active users every month, more and more are finding this mobile application of good use to share instant videos and get recognized.

There are several different reasons why users are inclining more to it. However, many prefer to keep an amicable distance because of numerous reasons. These advantages and disadvantages of TikTok Video App are here to direct your attention to some facts. Let’s roll down a bit to find out how it can affect you and your kids.

The world became more unified since the TikTok and Musical.ly merger in 2018. The user base strikingly growing with the highest rating and generating more revenue for the ByteDance (Chinese-based) developer firm.

Available in 75 international languages worldwide, this app surely is users’ first choice to post and share 15-second videos. Out of 500 million active users worldwide, US accounts to 39.6 million with India upping the spot with 119.3 million. The numbers are still staggering as we speak.

The reasons why these numbers are expected to skyrocket in the coming times are explained in the advantages of TikTok app. Agree or not, you might have come to experience this app in the same way as others.

A major proportion of users post their funny videos edits to entertain others. Once you register with Tik Tok, it’s easiest to bring a smile to your face and rid the day’s stress. You can spot thousands of videos to your liking, head to YouTube if you want to have a glimpse of unlimited fun.

2. Tik Tok can make you Famous

How good would it be to reach the global audiences and showcase your talent online? Many springing talents have caught the world’s attention by just compiling Tik Tok App Videos. Famous celebrities like Amy Smart, Ashley Tisdale, Jonas Brothers, Ed Sheeran, and Will Smith are some names to help you get started with this app. Follow your favorite ones to see what they share with their fans.

3. Everyone and Anyone Can Edit Tik Tok Videos

You don’t need a specialization at editing videos and adding the background music while using this app. Available in 150+ countries and 75+ languages, this video app brings you the simplest interface by featuring audio and video editing options for ease of use. This is why kids love it the most.

4. The Mega Fan Base and Following

Regardless of your location, you can group up with likeminded users and grow your fan base and following. This helps you get the best figures of audience and attention. It’s pretty conclusive that Tik Tok App is also another way to socialize with people other than Facebook and Twitter.

5. A suitable Option for Business Promotion

Business Promotion is one of the hidden advantages of TikTok App. If you have stepped into freelancing or video blogging, this app can take your business to heights. Shoot a 15-second promo and upload it to fetch potential customers.

Besides, being a social networking app, Tik Tok also serves as a reliable tool to deal with your business needs. What else is required when you have a free application to promote your brand? A qualitative and precise video content is good enough for start-ups to market their products and services.

6. Hangout with your Groupies

Creating Groups and sharing your stuff in your community is one of the greatest uses of TikTok app. This advanced app goes beyond just texting and sharing stuff. Post your videos instantly for anyone you like and hangout with your group any time you wish.

7. You Need Not have specific skills

What is liked on Tik Tok Video App is what gets viral instantly. You don't need to scale your skills, as a matter of fact, you don’t have to have any necessary skillset. Do whatever you like and express yourself to your network and let it reach the eyes that appreciate your work.

Fame is just a few minutes away as the more viewers engage in your content, the more viral your stuff gets across the net. The best quality content deserves attention beyond boundaries, and attention is what everyone needs after all.

Your data is residing online and that attracts both the goods and the bads. Some facts should not be undermined as these seem to affect this application’s reputation now. As debates are raging regarding the use of Tik Tok App, many media channels have put this application under the scanner. Let’s look at some of the odds of the TikTok App now.

As the application gets more attention from everyone, some prying users have also found the Tik Tok video app as a perfect platform to impersonate or misuse their rights. Most of the users have reported of being redirected to adult dating scams though the TikTok app latrely. This questions the use of this app for underage kids among many concerned parents.

A freeware comes without any restrictions on advertisements. A free version of this application is laden with ads that are annoying and sometimes lure users to pay. Many sites just look for a way to monetize by hook or by crook. Users are more likely to pay through a popular platform being fooled by its reputation and brand.

A Chinese Email Scam came up the surface in December 2019, which made the US Army take rigorous steps against the use of Tik Tok on government phones. This incident was triggered by an offshoot app called ToTok. This copied app leaked some sensitive information about US army operation on Iranian Military leader, Qasem Soliemani.

Although TikTok security risks haven’t been reported anywhere, US Defence had to take stringent measures to avoid future risks.

As this app tends to host more and more content, kids are turning addicted to its overuse. Tiktok app has turned into a database for videos to attract users of all ages. Kids are more likely to turn into the stuff shared through the Tiktok video app. Such addiction is resulting in distress among parents as well.

Besides fun and entertainment, numerous users display sensitive, distasteful, or violent content. According to Jerusalem Post, A video displaying terror-attacks against Israeli citizens went viral putting this app in a jeopardized situation. However, this video was deleted soon after by Tiktok, but it still triggers the alarm among the rest of the world. Given that nobody knows, how safe it is for your kids.

In another report published by Wired, an incident came to light in India’s southern state where a man allegedly live-streamed his hat speech against a particular community (the Dalits) just a day before murdering a member of this underprivileged caste.

Figure out what’s even worse than just scrolling down the countless videos. Instant fun and amusement is just instantaneous for most of us. Let’s not ignore the fact that you won’t be getting to learn anything from a 15-second clip. There are minimal chances of finding educational content on the TikTok app.

What come next to your senses after watching some TikTok videos? Boredom; It’s better to limit your visits to this app to adjust your time. Participating in a real-time activity seems more advantageous than clipping videos.

Including the UK, USA, and India, TikTok has also grabbed attention for its rampant use as a tool for harassment. Trollers leverage this application to deliver distasteful and offensive remarks against the people they disapprove of. This not only portrays false characterization but also makes you think of the impacts of disrespect on a user or a particular community.

Social media apps have turned into a convenient tool to express both your concerns and open mockery. As everyone has the right to freedom of expression, you should also consider the negative effects of defaming or disrespecting someone.

It’s clear to eyes that every social media application unearths its own pros and cons. Tiktok video app, on the contrary, can also be used as a creative tool given that worldwide users prefer it to share short videos and innovative content. To protect kids from exposure to sensitive content, this app can use content filtering methods and swifter action plan to tackle abusive content.

What are the advantages of Tik Tok?

Tiktok is more often used as a platform for entertainment and enjoyment by kids. For business firms, TikTok is just another social media platform to promote their products and services.

What are the disadvantages of TikTok?

Many user accounts are either fake or of strangers. Several reports have been surfacing about adult content to which uses are directed when they click on promotion. Around 80% of children are exposed to inappropriate content online by age 11.

This video app can help you grab attention from global users. Given that 800+ million users are currently active on Tiktok, the chances of you having huge fanbase are higher. Regardless of how many users you have initially, your video gets viewed and liked if it has quality and relevant content. This way you can earn instant fame.

Is TikTok safe for kids?

Given that TikTok doesn't filter videos according to the user's age, there is a little risk of children's exposure to illicit content. But, these problems persist with every social network these days. Parental supervision is very helpful to kids using the Tiktok app.