Advantages and Disadvantages of Spy cameras 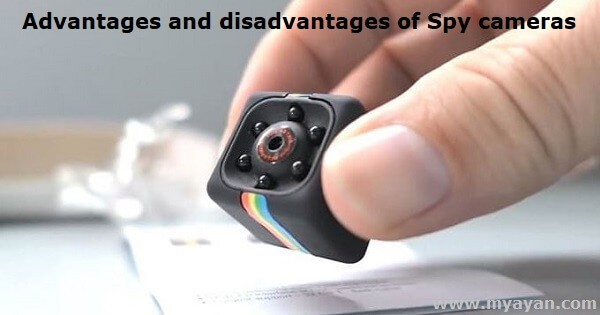 A spy camera is the need of the hour if you are suspicious of unlawful activities in your home, workplace, or grocery store. A hidden camera can capture more than naked eyes can ever spot. Known as a Still video camera, this tiny monitoring device can help you track crime, bringing you to live evidence. What if you spot on in the wrong place at the wrong time? There have been debates over the inappropriate use of spy cameras. The argument brings the Advantages and disadvantages of Spy cameras to light, considering it’s good and the band sides.

Why are Spy Cameras used?

This small device is used for video recording, staying hidden from plain view. Private investigators and law enforcement officers often use spy cameras. They're also popular with people who want to keep track of their homes while they're away or who want to have evidence of the unfaithful.

Most spy cameras have parts like an on/off switch, a battery, or a memory card. However, unlike other types of cameras, most spy cameras are small and portable, so that you can take them anywhere with ease.

Spy cameras are designed to be covert, so they can easily go undetected by those around them. They offer an unobstructed view of everything in front of them and any visual information being transmitted within range.

You are most likely reading this article because you want to learn more about spy cameras. Of course, there are spy cameras pros and cons worth considering, but they are still one of the best ways to keep an eye on your property or loved ones while you're not there.

What are the Advantages of Spy Cameras?

Spy cameras are a great tool for providing security and peace of mind. They can be used to monitor your home, office, or anywhere else you want to keep an eye on what is happening. Some of the many advantages of spy cameras are worth peeking if you have found the right purpose to use one.

Anything installed or hidden will automatically deter thieves, and the less they know about your security system, the better. Thieves are constantly trying to get creative with their techniques to protect themselves from being caught on camera, so it's important to keep them guessing as much as possible by mixing up what you use for protection throughout different areas of your property.

This way, if somebody manages to steal something before a proper surveillance setup has been established, there should be enough evidence collected elsewhere without having had an expensive spy camera put into place beforehand.

One of the prime benefits of Spy cameras is the ability to see what's going on in your absence. Even during the night or when it's dark outside, you sit comfortably and let the small spy record everything. Spy cameras are helpful for surveillance in public places around your property, especially if you live in a badly reputed neighborhood.

3. Affordability is one of the mentionable advantages of Spy Cameras

You can purchase spy cameras across different price ranges depending on what you want them for and how much money you are willing/able to spend on each unit. There are plenty from professional brands or cheaper models that are still of good quality.

So, you can invest in technology as per your need, whether you are into investigative journalism, own a store, or even manage a micro-business with a handful of suspicious employees.

Footage from security cameras can help you make correct and fair decisions when settling disputes, both in domestic and professional scenarios. Whether it's dealing with a situation involving disagreements within your family, employees, or between a customer and your service staff, your doubts can be laid to rest with the help of your spycam.

Concrete evidence is what you can gather from the recorded footage, and that's the most prominent reason journalists and investigators have relied on exposing falsified records and fake doctors.

One of the many advantages of spycams in the workplace is that you can maintain records neatly. To have good records in the company, you need to put the necessary information about customers and clients in the records.

However, there are some benefits of having good records, such as controlling a situation, keeping track of what has been done, and ensuring that all the needs are met.

What are the Disadvantages of Spy Cameras?

Spy cameras have their place in the world, but they also come with a lot of issues. If you consider using one for your business or personal needs, be sure to weigh all these pros and cons before making any decisions about installation or use. Some of the Disadvantages of Spy Cameras have been listed based on the recent contradictions.

One of the technical Disadvantages of Spy Cameras is the lack of recording Audio data. A spy camera can't record audio. To capture sound, you will need something like a microphone that is connected to the spy camera. Spycams are very different from other types of cameras because they typically have a built-in microphone. Consider this pitfall of spycams when verbal evidence is significantly required apart from visuals.

2. It can be a Costly Affair

There are disadvantages of using spycams that can make them a costly affair. Once you purchase your camera, you will need to have it hidden. You'll also need to keep replacing the battery and the memory card for your camera.

This can be time-consuming and frustrating, but one of the problems is that you may forget about your camera and then find out later that it stopped working.

Everything based on technology is vulnerable to malfunctions. Spy cameras are most often used in the role of a hidden camera. They also need power and storage media to operate, which means that it's important for them to be functional and well-hidden.

If your house is broken into while you're away on vacation, thieves might notice the wires going up the wall or cables running along the floor; this could cause problems if you rely on these videos as evidence during an investigation.

Another disadvantage of spy cameras is that they are not good at detecting threats that are not seen on video. An intruder could monitor your property for weeks before making a move without being detected by the camera. Sometimes, detective work has to be done after the camera detects an intrusion.

This is one of the biggest spy cameras pitfalls because they are easy to disable or destroy when their location has been found out. A thief could use a knife, screwdriver, wrench, or another instrument to take it apart and prevent you from using video evidence against them in court. Proving an assault took place can be difficult if there's no visual proof with which to bolster your case.

You can't always tell if it's being used against or for your benefit. Private investigators and law enforcement officers often use spy cams, but they're also popular with people who want to keep track of their homes while they're away or who want to have evidence of the unfaithful.

If you know someone has a hidden camera in your home, hotel rooms, or even changing rooms, then chances are it was installed without your consent. This invasion may not be malicious on its own; however, there could still be consequences depending on what type of footage the individual captured. It's entirely possible that those misusing the cameras can intrude in your personal life.

Conclusion on Pros and Cons of Spy Cameras

Is it worth the risk to use hidden cameras in your home and offices? It is important that you carefully consider all of the pros and cons of spycams before making a decision. With so many options available, there are plenty of ways for you to find what will work best for you and your family.

What are the benefits of hidden camera?

There are many benefits of a hidden camera. The most important benefit is security and safety for your family. If you have a home business, a hidden camera will prove that employees are stealing from you or not doing their job correctly. If you want to record someone's bad behavior without them knowing, then this would be the best solution.

What is the disadvantages of spy camera?

A spy camera provides evidence to be used in court against someone accused of a crime or caught doing the bad behavior. With this being said, the most significant disadvantage of these cameras is that people can find out that you have one, and then they will avoid being videotaped.

What are spy cameras?

A spy camera is a device that records video and audio. It usually looks like an everyday object such as a pen, clock, or smoke detector. It is also called hidden camera, covert cameras, and nanny cams.

What do you need to use a spy camera?

No special equipment is needed for video and audio for most spy cameras. But, for some cameras, you might need a VCR or DVD recorder to connect the camera directly to your television so you can record the videos.