Advantages and Disadvantages of Petroleum

Petroleum or crude oil is a non-renewable source of energy extracted from beneath the earth's crust. Every day requirement of petroleum is more than 100 million barrels. Petroleum and its products are widely used around the globe because of its advantages and applications. The non-renewable energy resource is, however, depleting, which triggers many concerns among developing nations. The negative effects of petroleum use deteriorate environmental conditions for humans and wildlife. The Advantages and Disadvantages of Petroleum study its benefits to the economy and adversities to living organisms.

Gasoline, Diesel, and other consumer products are the main sources of petroleum energy that power the global economy. These are the resources that allow people do things every day for survival. However, petroleum is also a resource that leads to environmental damage and may make life more difficult for future generations.

What are the Advantages of Petroleum?

The history of the use of petroleum is more than 2000 years old, and with time and scientific discoveries, its use has also been modified. Since the invention of machinery based on liquid fuels, petroleum has been the black gold of the millennium. The use of its by-products is quite huge, and several industries are based on its availability. Given the demand and day-to-day applications, there are many advantages of petroleum to consider.

In 2020, U.S. petroleum consumption averaged about 18.12 million barrels per day, including nearly 1 million b/d of biofuels. The use of its products has increased extensively within few centuries of the first oil well exploration. The US is not only the consumer but also the largest exporter of refined petroleum.

The economic development of any country is based on its industries and its machinery. The oil and natural gas industry offer more than meeting the energy demands of a nation. The sector also creates jobs and empowers local businesses to flourish. Petroleum is the main reason why Gulf countries have the strongest economy. Without such economic advantages of petroleum, many countries would have suffered.

Although recently electric vehicles market have grown with people recognizing the need to save the environment from greenhouse gases, 90% of the vehicles are running on either petrol or diesel. From locomotives to small gasoline cars running, petroleum is a daily necessity for the movement of people and goods.

Biofuel and Fossil Fuel are extracted from Petroleum which is used for recreational purposes. Petroleum has historically been the largest major energy source for total annual U.S. energy consumption.

The reason why Petroleum is used as a fuel is the amount of energy it produces on combustion. Ways have been developed to utilize this chemical energy by converting it into mechanical energy. Even higher energy nuclear fuels are available, but we have not yet developed stable methods to use them.

The availability of any fuel decides its future, and petroleum has that quality by having abundant resources. Even though most of the petroleum is limited to few countries, the reserves are still quite large to meet the world energy needs. Until we have developed new ways to harness nuclear fuels, we have a sufficient amount of energy to fund those researches.

Roads are the future of a nation, and worldwide connectivity and tar used to make roads is also a petroleum product. Major highways and bridges provide smooth transportation of goods throughout the country and give mobility to transport. It could not be possible without the use of petroleum.

What are the Disadvantages of Petroleum?

Humans have always been progressive with time; as steam engines are replaced by their diesel counterparts, more breakthroughs in technology means better options. The world has to come up with better techniques to utilize other resources before running out of petroleum. From aviation to the automobile industry, the widespread use also contributes to the disadvantages of petroleum.

1. Major Disadvantages of Petroleum use are Emissions

The combustion of hydrocarbons from petroleum releases a high amount of poisonous gases that pollute the environment. In addition, methane and other gases cause air pollution to rise. On the other hand, automobiles and industries are the major contributors to emit Greenhouse gases and global warming.

The crude oil and contaminants may accidentally spill into oceans during the extraction and refining process. This spilt oil makes it difficult for the aquatic organism to survive. Mauritius Oil Spill disaster and Deepwater Horizon incidents remind humans of the grave dangers of Petroleum.

The sites are still the major cause of death of marine animals in the affected areas due to the mixing of toxic elements. Also, extracts and wastes of these products are drained to freshwater bodies and rivers, making it harmful even for humans.

Petroleum is becoming a heated topic for political warfare between many countries as the world grows dependent on it. With dependency on oil, world politics is also very high on petroleum resources.

There are controversies based on its pricing and export as it impacts the whole world's economy. From dictators to terrorists, all have an eye over the resources and try to control them.

Non-oil producing countries that depend on petroleum imports have to incur more taxes and prices per barrel. Therefore, depending on other nations is one of the concerning disadvantages of petroleum for such countries.

As this is an expensive resource, the developing and underdeveloped countries have to face the burden of high investment to have access to this fossil.

As petroleum is obtained from decomposing matter buried beneath the earth, it takes millions of years to form. Given that the stock is limited, the world will run out of this energy source one day.

While comparing it to other cleaner sources like solar energy, wind energy, Tidal & even Nuclear Energy, petroleum doesn't approve to be the first choice. There are plenty of researches underway to find a sustainable option to meet growing energy demands.

Conclusion on Pros and Cons of Petroleum

The widespread use of the varieties of refined crude oil proves to be an essential commodity to the present world. It has proven to be a major factor in the modernization and industrialization of the new world economy. A world without oil is unimaginable, yet, there must be considerations in place to replace the dependency on petroleum in the future with alternatives. 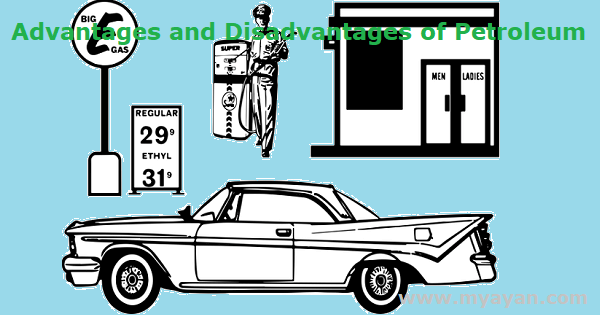 What are the negative effects of petroleum in the environment?

As a fossil fuel, the combustion of coal produces polluting emissions, especially carbon dioxide, one of the most harmful greenhouse gases. In addition, human-induced greenhouse gas emissions have changed the global temperature regulation layer in the atmosphere, essential for keeping temperatures stable.

What are the disadvantages of using coal and petroleum?

Pollutants from fossil fuels include carbon monoxide, nitrogen oxide, sulphur dioxide, and other compounds that cause acid rain. Acid rain affects soil fertility and drinking water quality due to the release of oxides of carbon, nitrogen, and sulfur by fossil fuels.

How does petroleum poisoning happen?

Ingestion or breathing in toxic gases, such as gasoline, diesel fuel, kerosene, paint thinners, etc., can cause hydrocarbon poisoning. Aspiration pneumonitis is the most frequent consequence of ingesting gas. In addition, ventricular fibrillation is the most common form of ventricular arrhythmia in adults and children aged 5 or below.

What is the harmful effect of gasoline?