Advantages and Disadvantages of Cell Phones in School 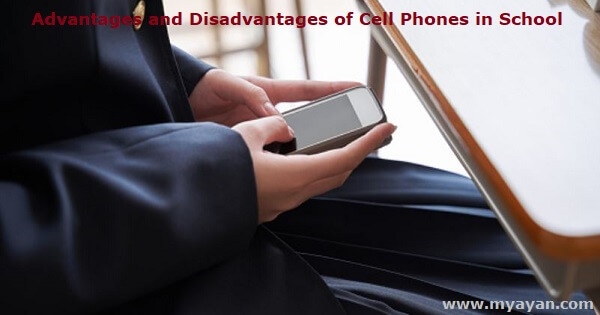 Carrying cellphones in school is both beneficial and arguable at the same time. Parents can know their kids' whereabouts, and kids can use their phones to access knowledge apart from their books. But allowing cell phones in school during periods oftentimes seems arguable. Cellphones are an easy way to get your kids distracted amid their classroom lectures. The Advantages and Disadvantages of Cell Phones in School explore both sides of the argument.

There has been a lot of controversy about the use and presence of cell phones in schools. Schools and parents are often caught in a situation why students are allowed or not to be allowed to bring their phones into school. What should happen if there is an incident with them and there’s no one around.

Today’s society revolves around technology, so having access to your mobile device can be beneficial in terms of safety. In addition, smartphones enabled with GPS are more convenient for parents. Mobile phones also give students the ability to find out answers quickly during class which saves time.

What are the Advantages of Cell phones in school?

Mobile phones keep students focused and gives them something to do when taking their breaks or waiting period between classes. Given below are some other mentionable Advantages of using Cell phones in School.

1. Students can be reached in case of emergency

You can be reached in case of emergency; all you have to do is hit 911 in case you can’t reach out to your parents. This is especially important for young children who might not have a designated guardian to get them home if they need help or when parents are unavailable because of work schedules.

Cell phones allow students the opportunity to learn about what's happening outside their classroom. They also provide a way to stay up-to-date on current events and topics that may come up during class. This knowledge outside the books helps with homework too. Finally, since cellphones are so widespread these days, many people use them as an educational tool by looking something up online while it comes up in discussion (e.g., math problems).

Teachers can teach the students when they are not on-site. For example, during the COVID-19 pandemic, millions of colleges started taking online classes connected with students through their phones.

Having access to students outside of school hours also means that teachers will know how to virtually manage classroom sessions and lesson plans. Texting or calling out to an individual is much less disruptive than shouting across the room to get someone's attention.

4. Child Safety is one of the main Advantages of Cell Phones in School

As a parent concerned parent, looking after your kids is your prime responsibility. That’s one of the reasons why you may allow your kids to carry cell phones in school.

According to reports, around 2000 kids are abducted in the US every year. Even though Kids are rarely abducted from school grounds, but to make sure they are in a safe place, many parents use GPS locator apps on mobile phones.

Cellphones keep kids connected with their parents outside school hours, increasing parental involvement at school time and after-school activities such as homework help or sports practices. This helps them feel more invested in what they're doing to have better grades and enjoy themselves more overall.

Disadvantages of cell phones in school

Safety concerns such as cyberbullying and being targeted by strangers on social media are major disadvantages of cell phones in school. Although this may seem like a valid argument, there are already laws in place for that.

Another reason why students should not be allowed to have cell phones in school is addiction. According to a report, around 50% of parents feel their kids are addicted to their cell phones. The report also showed, that 78% of teenagers check their phones at least hourly.

2. Distraction is one of the major disadvantages of cell phones in school

There's also another problem with carrying cell phones in school; it would make students' lives even more stressful by distracting them when trying to focus on learning. Around 72 percent of teens feel the need to respond to texts, messages on social networks, and other notifications immediately. This can be enough to distract your kids while they are in the classroom and trying to concentrate on one task instead of two different ones simultaneously (texting while taking notes).

Cell phones can be a distraction even to teachers and encourage students to cheat in their exams. Cheating or looking up answers online is what students do when they are unsure of themselves. This may help students get better grades but degrade their capability to learn. Most importantly, it's against morals.

In the past few decades, cell phones have significantly impacted society due to their ease of use and efficiency. However, experts are now questioning if they're having an adverse effect on people's health. For teenagers addicted to mobile phones from an early age, it's even worse to imagine. Tons of research studies have concluded with similar health effects of excessive mobile use, ranging from Brain cancer to infertility.

Cell phones in the classroom can be distracting to other students and teachers. Even a single beep of incoming notifications can disrupt the flow of an entire session. If mobile phones are not kept on silent mode, they can hamper the entire learning process.

In addition, if schools allow cell phones in schools, teachers will lose control of their classrooms because they cannot prevent cell phone use among students who are bored or feeling left out.

Conclusion on Pros and Cons of Cell Phones in School

The debate over the pros and cons of cell phones in school is a complex issue with no clear-cut solution. The fact remains that there are many strong arguments against allowing them in school due to negative consequences on academic performance and kids' online safety concerns. These concerns relate to students, staff, and parents.

In contrast, others argue that proponents of these devices see it primarily as an educational tool to improve student engagement during class periods. Both sides offer compelling points about how this device could change education if implemented correctly. Still, opponents believe it will set a bad precedent for future generations who believe they have the right to do whatever they want during school hours.

What are the advantages of cell phone use in school?

1. Students can learn in a manner that is suitable for them.
2. It's simple to obtain answers.
3. Audio and video may help to make learning more engaging.
4. Access to educational apps is critical.
5. Smartphones allow for social learning opportunities.

What are the disadvantages of mobile phones in schools?

When students arrive at school, they usually have a lot of energy. However, using cell phones in class may have detrimental effects on children's mental health since it affects social interaction and cellphone misuse has psycho-social consequences. Cyberbullying can cause problems such as depression, low self-esteem, and physical ailments like headaches that affect a student's quality.

Cell phones provide students with access to software and apps that can assist them in completing their schoolwork. These technologies may also help children develop better study habits, such as time management and organization skills.

Furthermore, the study revealed that it has become easier for pupils to avoid concentrating on their studies in class with technological advancements. More than half of instructors (56%) said that students are frequently off-task on their mobile devices and using technology for one thing when they should be focusing on another.