Advantages and Disadvantages of being an Electrical Engineer

The job of an electrical engineer is to design the power systems that will provide energy for things like lighting, heating and cooling systems, motors, appliances, computers and other machines. Electrical Engineering is a field that covers all the different aspects of how technology based on electricity works.

Electrical engineers have the opportunity to create new things and fix the existing ones for people to use daily. The responsibilities in this profession can vary from dealing with large machinery to handling small electrical setups. Being an electrical engineer, it's your job to make sure everything runs smoothly by developing power grids or troubleshooting circuits.

What do Electrical Engineers do?

What are the Advantages of Being an Electrical Engineer?

Electric Engineers are an important part of maintaining power grids and producing new technology for people to use every day. In addition, they play a role in creating things like electricity or building amusement parks. It is possible to make your own career if you choose electrical engineering as it offers many benefits.

Companies like General Electric, Toshiba, and Schneider Electric are the leading employers besides being the masters of creating innovative technology. Electrical engineers work for companies such manufacture, test, and supervise the manufacturing of hi-tech, sustainable, and advanced electrical equipment such as electric motors, radar and navigation systems, communications networks, power generation equipment.

As the world steps into another phase of modernization, electrical engineering has turned smart homes, smart cities, and hybrid workplaces a possibility utilizing renewable and non-renewable sources of energy.

Electrical engineers often work in teams with other electrical and technology experts such as software developers, computer hardware specialists, systems analysts and technicians.

They collaborate to design new products by creating prototypes of the product, which they test together before passing it onto manufacturers for production. They also figure out how something will actually be manufactured when they are designing it.

They are often the first people to notice if something isn’t running correctly or is malfunctioning, so they need to be able to come up with a solution quickly. This requires knowledge of how everything works together as well as being quick thinking.

Electrical engineers have the opportunity to work in many different capacities within their industry. For example, they can be employed by companies that manufacture electrical equipment, software firms, or they might even become an independent consultant working from home.

In addition, many electrical engineers in suburbs or rural areas in the US prefer to work as freelancers, and they are known for their skills throughout the community.

5. Good salary is one of the advantages of being an Electrical Engineer

The average yearly income for an electrical engineer in the United States is around $100,000. This is because they are considered some of the highest-paid engineers, and their skills are required by so many different industries that there will always be work available.

What are the Disadvantages of Being an Electrical Engineer?

Because there are so many different electrical engineers available, so there can also be downsides to choosing this career path. Electrical engineers have many responsibilities, such as extended work hours. In addition, while the industry is always changing, engineers must regularly learn new things to leave no gap in their career.

From farming to the modern-day healthcare sector, every industry depends on power; and where there is power, there's a demand for an electrical engineer. Because there are so many different jobs available within this field, it can be difficult to find work if you don't know where you want your career path to go.

In addition, many high-profile companies will require a specific type of experience or education before they hire someone with no previous experience. This means that it can be difficult to get your foot in the door if you are new.

2. Get ready for the Legwork

If you are looking for a desk job after graduating in electrical engineering, you may have boarded the wrong ship. It is common for professionals in this field to travel overnight or even spend the night away from home while working on projects built far away, so if you don’t like spending time away from your loved ones, then it might not be right for you.

Even if you are posted in a company, you must monitor and supervise the electrical setups. There is little or no rest in this profession.

3. Stressful work is one of the considerable disadvantages of being an electrical engineer

When you are in a field that relies on technology, it can be difficult to keep up to date with the latest advancements and changes because everything moves so fast! However, electrical engineers must always stay ahead of this curve if they want their projects to succeed, so there will always be something new to learn, which can be stressful. Even if you are working fixed shifts, you can't leave your workplace if the problem doesn't resolve in time.

If you are working on a project with tight deadlines, it is common for your company to require more of your time than usual so the project can be completed in time, which means putting in extra hours or even working overtime. This problem may also occur if there is an abrupt failure or interruption in the power mechanism. You are obligated to fix it, no matter how long it takes.

There is no space tolerance for errors in this profession which may turn seriously fatal for you as well as your company/client if you are not skilled enough. The job requires previous experience and practice or a certain level of education.

Therefore, it is common for someone to find themselves working in the same field but doing something completely different than they expected. This means that if you want to become an electrical engineer, you will need to be prepared for this.

Conclusion on Pros and cons of being an electrical engineer

Electrical engineering pros and cons are both boons and a bane just every other job. The profession is one of the foundations of engineering and offers various perks, including high pay, more career possibilities, worldwide employment opportunities, and respect. The work is dangerous since there is always the danger of being shocked by electricity or tools/ electrical equipment. 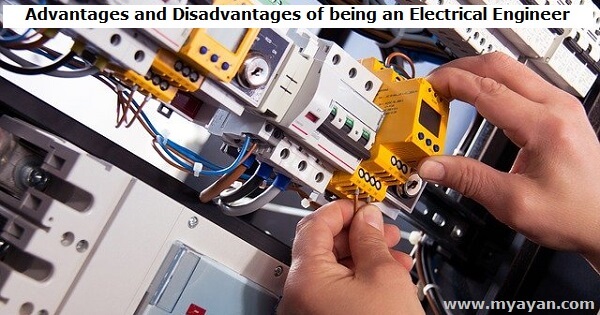 What are the disadvantages of an electrical engineer?

The stream entails working on many job components over a long period. It necessitates skills and understanding in mathematics, which is difficult for some individuals to acquire. It necessitates at least a bachelor's degree plus years of apprenticeship from another electrical engineer/electrician.

Is electrical engineering a good career?

Electrical engineering is an attractive professional option for young individuals because there are so many job prospects in the field. You may work in any sector that uses electricity, from government agencies to private IT companies, among others.

Do electrical engineers get paid well?

Electrical engineers are highly sought after, with salary rates frequently exceed $254,000 per year. As a result, an electrical engineer's income is usually greater than the national average. An Electrical Engineer gets paid an average of $71,000 each year.