Pros and Cons of Filibuster

In the US Senate, a filibuster is an attempt to delay or block legislation by talking for a prolonged period. A senator who wants to stop a bill from passing begins what's called a "talking filibuster." The rules allow the senator to stand and speak as long as they wish, even if it means reading everything they can find in their office. For someone else to end the process, 60 senators must vote that what was said was not worth debating because there are no points left to make. Unfortunately, this has been done quite often lately, with some people believing that filibusters have become too powerful and frequently used. There are both Pros and Cons of Filibuster for the senator, opposition, and general public.

What are the Pros of Filibuster?

As said above, Filibuster can be beneficial for anyone except for the opposition. Here are some good reasons why Filibusters have been in use in the senate.

1. It can be used as a tool for citizens to influence government

The first of many benefits of the filibuster is the ability for citizens to be able to have their voices heard on an issue through legislative means. This is one reason why filibusters were so popular before 1917 in congress, as they allowed members of both parties a chance at recognition.

However, after 1917, citizens used filibusters less frequently and more often as a way for the minority party to delay or prevent votes on legislation.

2. It can be used to increase the public’s awareness of an issue

During a filibuster, citizens and journalists can learn more about issues and often hear details that they might not otherwise know of. This is especially true when filibusters take place in committee or subcommittee hearings where members have a chance to ask questions of experts from various backgrounds.

Filibusters also lead to increased media attention on certain subjects as it places them further into the political spotlight for greater discussion.

3. It can be used as a tool to delay action on an issue

Although filibusters were created to allow citizens and their elected representatives to speak out against the legislation, both parties have utilised them to prevent votes or actions from taking place at all costs.

For example, during his presidency, Barack Obama faced many issues where Republicans would filibuster any action he tried to take until it was no longer politically feasible for him to do so.

This is one reason why today we see fewer filibusters than ever; because our political process has begun moving more quickly towards party-line voting instead of deliberation between members.

4. It can be used as a tool to prevent the majority party from doing too much

Some also see filibusters as a safety mechanism for our democracy that ensures that the ruling party doesn’t pass legislation without being forced to consider the needs of both parties or members of different backgrounds.

This is especially true for issues such as civil rights, where many believed they would have been voted down if not given enough time in committee hearings and debates.

5. It can be used to shape public opinion

Filibusters are also what help senators and representatives alike shape the opinions of their constituents by allowing them a way to speak on an issue publicly in front of cameras for extended periods.

This is especially important for controversial or complicated issues that many voters might not understand without having somebody explain it thoroughly, for example, filibustering over Obamacare.

This is why you often see politicians speaking at length during these sorts of situations. If they don’t, someone else will come who may take advantage of this opportunity to convince people differently than intended.

It's not always beneficial for the senators; sometimes, Filibuster's drawbacks can hinder even the natural political processes.

1. It can be used to shape public opinion for political gains

While filibusters are often seen as a way for representatives to hold their ground on issues they believe in, this is not always the case since some politicians will use them solely as an opportunity for political gain by giving themselves more time on TV and radio than others. The best example of this is the 2016 GOP Primary Debate where Marco Rubio went over his allotted time.

Unfortunately, because of how rarely filibuster reform has taken place within our country's history, it is difficult to know which instance falls into these two categories without first looking at what legislation or issue was being discussed.

2. It can be used to prevent votes from taking place

One of the biggest disadvantages of filibusters is how they have been utilized to prevent votes from happening at all costs since representatives stand a better chance of being re-elected when they prove themselves as strong individuals who don’t back down for anyone or anything.

The best example is the 2008 GOP Primary Debate, where John McCain said he would not vote on any budget under Nancy Pelosi.

This means that even if their constituents support legislation, it will still take weeks and months before it gets passed by both chambers due to filibuster reformers wanting more time within debates which ultimately leads us towards party-line voting rather than bipartisan agreement.

3. It can be used as a tool to prevent the majority party from doing too much

Filibusters are also seen as a safety mechanism for the democracy, ensuring that the ruling party doesn’t pass legislation without being forced to consider the needs of both parties or members of different backgrounds. This is especially true for issues such as civil rights, where many believed they would have been voted down if not given enough time in committee hearings and debates such as the 2017 GOP Primary Debate.

4. It can be used to shape public opinion against particular legislation

Filibusters are used to delay certain pieces of legislation to sway the opinions held by their constituents away from it rather than towards it. For example, in the 2017 GOP Primary Debate, Ted Cruz spoke out about Obamacare.

While filibuster reform has made these sorts of tactics less popular over recent decades because minority groups don’t want any sort of delay tactic preventing them from having their voices heard at all costs anymore since they now feel confident knowing there will be a vote on the bill one way or another.

5. What was said can be ignored by the Senate

What was said could be used against what was just voted on in the future. Another disadvantage is that it can take a lot of time to pass legislation and might even slow down or stop things from happening.

Starting with "I believe" or "In my opinion," I feel like what was said can be ignored by the Senate because they might not want to deal with it anymore. This could prevent what is really needed from getting done. It also takes up a lot of time while other bills wait for this one to pass through only so senators can continue doing nothing productive.

Finally, what was just voted on might come back later against them if legislation similar comes around again in the future.

Conclusion on Pros and Cons of Filibuster

The filibuster has been a part of Senate rules for over 200 years and is one of the unique aspects of American democracy. It allows minority parties to exert some control on legislation that would otherwise be passed without their input or consent. However, it also comes with its share of drawbacks which can affect different parties differently. 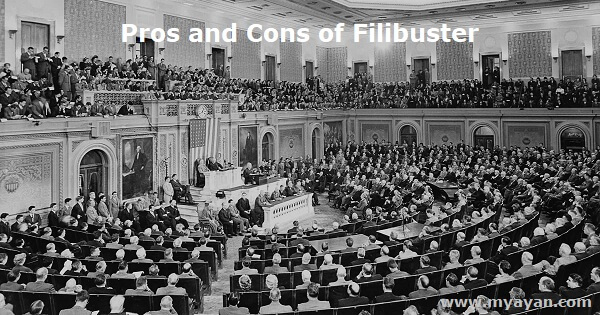 The unlimited debate procedure in the Senate has allowed for the use of the filibuster, a loosely defined term for an action that is used to extend debate and delay or prevent a bill, resolution, amendment, or another debatable issue from being passed.

What is an example of filibuster?

During World War I, senator Robert La Follette employed the filibuster to argue for freedom of speech. During the 1940s, U.S. Senator Huey P. Long holds the record for the longest continuous speech with 24 hours and 18 minutes filibustering against the Civil Rights Act of 1957.

What is the longest filibuster in U.S. history?

On February 6, 2013, a member of the opposition party in Congress, Oregon's Democratic Senator Jeff Merkley, began to speak for 24 hours and 18 minutes, making it the longest single-person filibuster in U.S. history.

A filibuster is a strategy employed by a small subset of the Senate's members to prevent legislation from being passed even though it has enough supporters to pass. The technique involves taking advan

How do you break a filibuster?

Senate rules would need to be changed for the filibuster to be eliminated. According to current Senate rules, any change or restriction of the filibuster would be a rule change that would itself be filibustered with two-thirds of those senators present and voting (as opposed to three-fifths required under current rules).