Advantages and Disadvantages of Nuclear Fusion 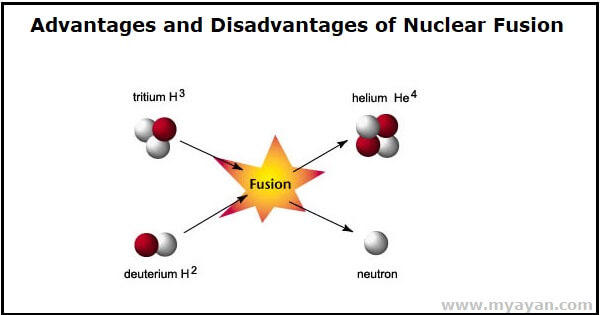 Sun is the most prominent and ultimate example of how vital Nuclear Fusion is to suffice humans’ never-ending need for energy. The foreseen advantages of the Nuclear Fusion reaction are why countries have already invested in the $25-billion experiment in Saint-Paul-lez-Durance, France. European Union, China, India, Japan, South Korea, Russia and the U.S. all have eyes on the ITER. As of now, only Scientists can figure whether International Thermonuclear Experimental Reactor (ITER) succeeds or not. Populations will undoubtedly be curious to find the Advantages and Disadvantages of Nuclear Fusion given the current environmental crisis.

Nuclear fusion is a chemical process in which two atoms combine releasing an enormous amount of heat. This energy is harnessed to generate other useful forms of energy like electrical and mechanical energy using fusion reactors. Today only about 10% of world electricity is supplied by nuclear power plants. An extra 50 reactors will make it rise to 15%.

What are the Advantages of Nuclear Fusion?

Nuclear Fusion is one of the primary sources of life on earth. Scientists have identified and begun the process to create ITER to generate our energy in case we run out of solar energy someday. Here are some advantages of nuclear fusion reaction to expect in the future.

Speculations are, The ITER will operate to generate the thermal output of 500 MW, taking less than 50 MW of heating power. The nuclear fusion reaction will generate immense heat, which would be enough for commercial and domestic use during winter.

The Nuclear fusion reaction would generate clean energy compared to coal or Fossil Fuel, guaranteeing zero emissions. This is the reason why developing better ways is also essential to utilizing this powerfully.

2. Ease of Transportation-one of the greatest advantages of Nuclear Fusion

Whereas mining and transportation of traditional fuels like coal and petroleum take a considerable cost, transporting nuclear fossils is still less costly. The energy ratio of coal, petroleum is relatively less as compared to nuclear materials.

The materials needed to create a nuclear fusion reaction are readily available and abundant on every continent. Once nations start using it properly and cautiously, it will serve centuries of fuel and energy requirements.

The conditions needed to create a chemical reaction for nuclear fusion are simple that nations can't harness it in bulk safely. Still, as we will control it, we may be looking at specialized fuel and more advanced vehicles. This will enable more ways for space exploration as well. By 2025 we might be able to see a viable nuclear fusion reactor. Heavy water is an example of a valuable product of nuclear fusion.

Nuclear fusion is endothermic for lighter atoms and generates profitable energy, which is the extra mass of the reactants. Also, compared to fission reaction, there is no release of any harmful byproducts, and the energy obtained is clean, which can help reduce global warming and pollution. No harmful effects to the environment are considerable advantages of nuclear fusion reactions.

What are the Disadvantages of Nuclear Fusion?

When a nuclear reaction occurs, radioactive elements are produced, which can be a threat to humans and animals. Once the world knows to harness the energy it can be used for destructive purposes such as weapons, accompanying some other disadvantages of Nuclear fusion reaction.

1. The process is still in infancy

The reactors able to contain nuclear fusion are in the development phase, and we may have to wait before generating profitable energy from this available resource. The future needs of fossils can be met by finding alternatives to clean energy.

Radioactive released during the reaction is fatal for both humans and other living beings. If the reaction is not under controlled circumstances, any chance of failure can be devastating for large nuclear power plants. So the infrastructure needed to carry out this chemical reaction needs to be highly protected and well equipped to control any mishaps. History shows how devastating a Nuclear disaster can be not only for humans but also the environment.

Whenever there is a breakthrough in new technology, protection from negative uses is needed. Already with the invention of hydrogen bombs, the chances of their use during war times is a significant threat to humankind. Moreover, with complicated political terms between nations, everyone is looking for alternatives to increase power and dominance by generating more powerful weapons.

Although the operational cost is relatively low, the equipment, infrastructure, and conditions required for the reaction to be carried out safely need billions of dollars to start with.

Cost and space requirements are also significant limitations of nuclear fusion reaction as the setup must be hundreds of miles away from the population. Still, researchers are working in a direction to have possible solutions in the future.

5. Nuclear Waste and its Disposal

Any nuclear process emits harmful radiation, and the residues or used equipment are radioactive, which may take 100 years to lower down to a non-harmful level. Thus storing or transporting the used fuel can be dangerous as well as incur extra costs. Furthermore, nations have to face more cons of nuclear fusion waste, finding the correct disposal methods.

Conclusion on Pros and Cons of Nuclear Fusion

While we are still looking to utilize its real potential, the fusion reaction finds a useful application in the future. By the time nations can figure out more ways to harness Nuclear Energy, scientists are still researching its probable outcomes. As far as the fission reaction is concerned, the disadvantages of Nuclear Fusion are many.

What is the disadvantages of nuclear fusion?

What are the advantages of nuclear fusion power?

The numerous benefits of nuclear fusion energy are far-reaching since it is a long-term, renewable, economic, and safe energy source for electricity production. In addition, fuel is cheap and readily available in nature, while the generation of long-lived radioactive waste and greenhouse gases through nuclear fusion is minimal.

The answer may be nuclear fusion power plants, sometimes referred to as thermonuclear reactors. First and foremost, they are more efficient; they require just one millionth of the fuel consumed by a coal-fired power plant to generate the same amount of energy.

Why is nuclear fusion so difficult?

It's much simpler to use an accelerator than a fission bomb. Neutrons are easier to generate at a reaction that produces neutrons because the fusion process involves two positively charged nuclei coming close enough together to merge. This is why nuclear fusion is complex, although the fission process is not (but it's still actually tough).