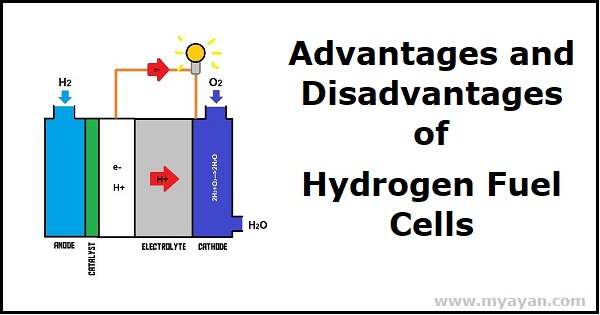 The concept of Hydrogen Fuel Cells is not new; it has been around since the 19th Century. However, carbon footprints are a global concern now, and to replace it, researchers are still figuring out sustainable options. Leaving zero emissions, Hydrogen Fuel cells are the future power generators; or, are they? The Advantages and disadvantages of hydrogen fuel cells explore the limitations and scope of this power source.

A fuel cell uses the chemical energy of hydrogen to cleanly and efficiently produce electricity. If hydrogen is the fuel, electricity, water vapours, and heat are the only residual products.

Fuel cells are unique in terms of their potential applications; they can provide power for systems as large as a utility power station and as small as a laptop computer.

How do Fuel Cells work?

Fuel cells work like batteries, but they do not run down or need recharging. Instead, they produce electricity and heat as long as fuel is supplied. A fuel cell consists of two electrodes—a negative electrode (or anode) and a positive electrode (or cathode)—sandwiched around an electrolyte.

What are the Advantages of Hydrogen Fuel Cells?

Clean and uninterrupted supply of fuel with no emission of harmful components into the atmosphere are some common advantages of Hydrogen Fuel Cells. Some other pros of Fuel Cells are listed below.

1. Low Emission is one of the major advantages of Hydrogen Fuel Cells

Hydrogen fuel cells combine Hydrogen and Oxygen to produce electrical energy, which can be used efficiently for automobiles and industrial purposes. The only residues that come out of this process are water and hot air. This could be the much-considered advantage of using Hydrogen Fuel cells compared to the 4.6 metric tons of carbon dioxide emitted each year.

Fuel cells can produce electricity continuously for as long as fuel and oxygen are supplied. So, unlike conventional batteries, they don’t have to be changed frequently. They operate and perform similarly to conventional electric vehicles; however, there is a whole difference in their efficiency. For example, you’ll have to wait for up to 8 hours to charge an electric car while a car operated on Fuel Cells need about 5 minutes to be fully charged.

Also, an electric vehicle typically has a range of around 230 miles, whereas cars running on Hydrogen Fuel cells can reach 310-370 miles range without being refuelled.

Many companies have turned to Hydrogen Fuel Cells technology to boost their productivity and reduce Carbon emissions greatly. Hydrogen fuel cells do not produce any CO2 emissions during operation, even if their production is not necessarily carbon-free.

The refuelling process for hydrogen fuel cells is easy and takes about three minutes, compared to the longer and more complex process of changing out a large, heavy lead-acid battery when it needs to be charged. Also, hydrogen-powered equipment can operate for longer times and less frequent refuelling than with a propane cylinder.

Hydrogen Fuel Cells could be the answer for heavy-duty vehicles that travel long distances and carry heavy loads. Hydrogen fuel has been tested in vehicles such as trucks, boats, trains and planes for various good reasons and CO2 emissions and efficiency are two of them.

Domestic use is one of the foreseeable advantages of Hydrogen Fuel Cells Hydrogen is also a contender to replace the compressed Natural Gas used in some domestic applications. A study by Swansea University found that up to 30 percent of domestic gas could be safely replaced with Hydrogen without requiring changes to boilers or ovens.

What are the Disadvantages of Hydrogen Fuel Cells?

Being an anomalous element and highly explosive gas, Hydrogen has its own limitations. From shipping to controlled environment, some major challenges also contribute to the disadvantages of Hydrogen Fuel Cells.

1. Storage is one of the concerning disadvantages of Hydrogen Fuel Cells

Hydrogen requires high-density storage, which is more of a challenge for the industrial sector. The storage solutions currently typically require the storage of large volumes of hydrogen in gaseous form. Also, shipping the high-density compressed Hydrogen gas is more challenging to ship. For this, large-volume, high-pressure compressed gas tanks would be required.

Electric batteries lose only 17% of their initial input of energy through inefficiencies when charging and discharging. The cycle used to create electrical energy within a hydrogen fuel cell wastes more than 50% of its energy efficiency.

3. Hydrogen Production Depend on Fossil Fuels

Even though hydrogen fuel cells do not emit harmful gases during operation, the same is not true for producing hydrogen fuel. Nearly the same amount of energy is required to produce as what Hydrogen Fuel Cells produce.

Hydrogen is abundantly present in earthly resources, but it’s typically bonded to other elements and must be isolated to be used for energy purposes. The process of separating Hydrogen from compounds like Hydrocarbons comes at the cost of time and capital. Solar Energy and Wind Energy are the two safer ways to obtain hydrogen fuel cell power which is not accessible in some areas.

Cost is one of the overwhelming disadvantages of Hydrogen Fuel cells as the technology requires sophisticated establishments and high maintenance. From storage to refuelling, the cost incurred to ship it and deliver it to the destination is unbearable for every sector, whether automobile or industrial.

Some commentators believe that hydrogen fuel cell cars will never become economically competitive with other advancing technologies. It will take decades for them to become profitable and efficient.

Elon Musk, CEO of battery-electric vehicle maker Tesla Motors, stated in 2015 that hydrogen fuel cells for use in cars would never be commercially viable because of the inefficiencies of production, shipping, and storage limitations. One major issue is that Hydrogen gas is highly flammable.

Conclusion on Advantages and disadvantages of hydrogen fuel cells

Even though Hydrogen fuel cells are a clean alternative to other non-renewable sources of energy, there are quite a few concerns to ponder. Zero carbon footprints and environment friendliness are its benefits. On the other hand, storage costs and a safe environment for shipping are the major concerns next to the cost. Therefore, it’s most important to understand the advantages and disadvantages of hydrogen fuel cells before replacing conventional energy sources for industrial and household purposes.