Pros and Cons of Legalizing Marijuanas 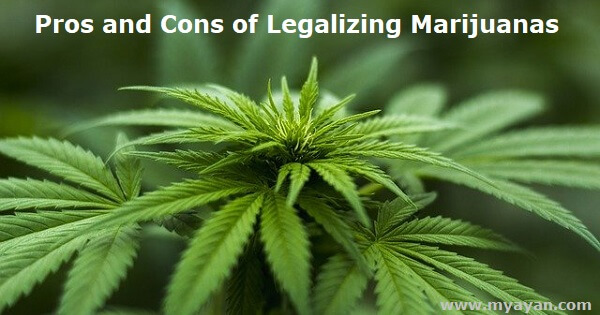 Around 43 nations have legalized the medicinal use of marijuana, but it's a long way to go for the rest of the countries. Marijuana or cannabis has been caught in the crossfires of debate for years due to its medical/recreational uses. Its effects are generally "beneficial" or "detrimental". There is still a lot of controversy around marijuana use, but it appears that more and more people support the legalization of marijuana. A balanced dose can do miracles, but their overdose can be fatal. Let's dive into the Pros and Cons of Legalizing Marijuanas.

Why is the Legalization of Marijuana Debated?

Legalization seems to be the next step in marijuana's journey from being regarded as an outlaw drug to mainstream acceptance. Concerning cannabis, there are at least two areas where groups may take action on their own, although some states have already legalized possession without federal intervention.

The first area involves using cannabis openly, smoking in public places, driving while high. This unauthorized use could trigger public nuisance or even criminal charges.

The second area pertains to owning or cultivating cannabis. Federal law prohibits both, while many states have legalized at least one of these.

In 1996, California became the first state to legalize marijuana for medical use. Since then, 28 other states and the District of Columbia have followed suit. Several other states consider similar legislation, including New Jersey, where Governor Phil Murphy has made legalization a top priority.

What are the Pros of Legalizing Marijuanas?

The high costs of enforcing marijuana laws cost taxpayers about $10 billion annually. According to state and federal estimates, legalizing marijuana would reduce these costs by an estimated $7.7 billion. The number of inmates sentenced for drug offenses would decrease substantially if marijuanas were legalized.

Legalizing marijuana would attract new businesses to the state which will create jobs, tax revenue, and therefore increase economic activity. These benefits have been seen in states where medical Cannabis is already legal. Some examples are Colorado, California, Arizona, etc. You can easily find CBD Oil or edibles patented by companies prepared from marijuana for medicinal purposes. A boos in business is one of the best possible Pros of legalizing marijuanas for medium and small scale pharma companies.

Prohibition of Cannabis has not achieved its goal as illegal sales continue to flourish. It has created a black market that will continue to exist until legalized. While the number of people smoking marijuana has increased since prohibition, funds are being wasted on prohibition & imprisonment instead of being used for education & health care.

4. Increase Quality of Life is one of the Pros of legalizing Marijuanas

Marijuana is an effective treatment for AIDS wasting syndrome, muscle spasms associated with Multiple Sclerosis, nausea associated with chemotherapy and chronic pain. Medicines and edibles based on marijuana can also treat depression, Arthritis, and many other ailments.

Marijuana is less addictive than tobacco. It has not been proven to cause as many cancerous agents in humans, unlike nicotine which can cause lung, liver or bladder cancers. Despite this, thousands of deaths are caused by cigarette smoking each year, while no deaths have been reported from marijuana smoking.

What are the Cons of legalizing Marijuanas?

There are a few potential cons of legalizing marijuana. It could lead to increased crime rates as people seek to get their hands on the drug illegally. Also, harm public health as people use it more frequently, and addiction rates increase.

1. Increased Use By Teens

Legalizing marijuana will make it more available and send the message that it is not harmful. This could lead to increased use by teens, who are more vulnerable to drug abuse than adults.

Marijuana impairs judgment, motor skills, and reaction time since it affects the nervous system directly. Once addicted, people are more prone to overdose, leading to more road accidents if marijuana were to be legalized.

3. Weaken Drug Enforcement is One of the Prime Cons of Legalizing Marijuanas

Legalizing cannabis would weaken our drug enforcement efforts as we would be sending a message that it is okay to use drugs. This could lead to increased use of other drugs, such as cocaine and heroin, and more crime.

Marijuana is a psychoactive drug, and its use can lead to addiction. It has also been linked to mental illness, respiratory problems, and decreased IQ in children who use it regularly.

This one of the major cons of legalizing marijuanas should be considered seriously. Over 94 million people in the US admit to having taken marijuana at least once in their lifetime. Many of them had switched to cocaine or higher drugs later on. If marijuana is legalized, businesses with a drug-free workplace policy will be forced to fire employees who test positive for THC. This could lead to the loss of jobs for many people who use marijuana off the jobs.

Legalizing marijuana brings with it both pros and cons. While there are many benefits to legalization, such as increased state revenue and decreased crime rates, there are also concerns about increased teen usage and car accidents. It is important to weigh the pros and cons carefully before deciding whether or not to legalize marijuana.

What are some cons of legalizing marijuana?

Marijuana has adverse effects on the brain and will lead to increased mental health problems after legalization. Cannabis use has been linked to an increased risk of developing schizophrenia, sadness, and other psychiatric illnesses.

What are the benefits of Legalizing marijuana?

If cannabis is legalized for recreational use, individuals who take it for medical purposes will have increased accessibility at a lower price. It has been given to those with multiple sclerosis who suffer from muscular spasms. It has also assisted people in dealing with persistent pain, headaches, and anxiety.

Why should Marijuanas not be legalized in Canada?

Many people have attempted to legalize marijuana over the years. Because of the reasons stated above, marijuana should not be legalized in Canada. Marijuana has both physical and mental short- and long-term consequences for users.

Why Marijuanas should be legal in the Philippines?

It may be used to enhance education, improve healthcare, create the justice system, assist the needy, pay off a country's debt, and strengthen unfunded government programs. And keep in mind that when marijuana is legalized, additional income can also be generated from sales tax.