Advantages and Disadvantages of Nuclear Fission

Nuclear fission is a chemical reaction in which an isotope is split into protons and releases a high amount of energy. The energy produced can be utilized by converting it to other valuable forms using nuclear reactors. There are various methods developed and under the developing phase where scientists are looking for advanced techniques. It requires a safe environment to carry out atomic reactions to generate continuous energy. Given there are plenty of risks besides the benefits, the advantages and disadvantages of Nuclear Fission evaluate this process from different viewpoints.

Different nuclear fuels like Uranium, Thorium, etc., are found suitable to be used as high-energy atomic fuel. The applications of this energy are many in terms of electricity generation, automobile, and aviation sectors for better fuel to energy ratio. Yet, the world can fulfil only 10-15% of the total energy needs through this process.

What are the Advantages of Nuclear Fission?

When a heavy atom is made to split into subatomic particles, the energy binding the atom is released called nuclear energy. Both nuclear fusion and fission reactions release this energy once the reaction is activated. The energy produced holds the key to the future for humans. Thus come many advantages of the nuclear fission reaction to mind along with the applications.

The energy obtained per kg of fuel is very high compared to other conventional fuels like coal, petroleum, etc. The current electricity proportion of nuclear power is only 10%, and other electricity generation methods create numerous pollutants responsible for air pollution.

There is an abundance of resources available throughout the globe, which can fulfil various energy needs from power generation to transportation and space exploration. Once better ways develop, the need for coal mining and transportation can be avoided to curb air pollution.

Although the setup cost is high for nuclear fission to be carried out safely under a controlled environment, it can be carried out for longer periods quite economically. Once the reaction starts, it can continuously generate power for 2-3 years.

4. Recyclability is one the key advantages of Nuclear Fission

For some nuclear products, the by-products are also fossils that can be reused. When Thorium undergoes a nuclear reaction with neutron bombarding it gives U-233 which also goes through a reaction the next time a neutron is bombarded which eventually increases the energy output.

As the requirement for nuclear fuel is quite less than other fossils like petroleum and coal, transportation is quite easy but needs a controlled environment during disposal. Therefore, it saves a lot of time and the cost of transporting materials for industries. Thus, fewer resources spent on shipping the materials are among the noteworthy advantages of Nuclear Fission.

What are the Disadvantages of Nuclear Fission?

The world is already looking for reliable nuclear energy alternatives, as the future population depends on atomic energy too greatly. But the full utilization is still under process because of few disadvantages of nuclear fission in terms of carrying out nuclear reactions. Some of them are unavoidable, but a few may be resolved through innovations.

1. Failures can cause destruction

Even though the mortality rate at a nuclear reactor is low, a technical glitch or a leak can result in a tragic incident. The power generated is quite high, which, if not controlled, can cause destruction or life loss.

As soon as nuclear power was harnessed, the use in defence has also increased. Most developed nations have produced hydrogen and atomic bombs that can eliminate the world population if used together someday. However, even the stock of such weapons can have disastrous results if attacked by someone, making it a dangerous resource.

Like any chemical or nuclear reaction, the process generates harmful byproducts. At the atomic level, the products formed could be radioactive, and any leakage will cause harm to humans and other animals in the radioactive zone. The effect of such radiations can be known through the conditions faced by Chernobyl and Fukushima incidents.

While the operation is quite cost-free, the environment and infrastructure needed for it are very costly. It requires a safe environment as the failures, in any case, are both dangerous and uneconomical. The reactors take a huge amount of money for infrastructure that could last for the next 30-50 years.

Unlike solar and hydro energy, it is a non-renewable source that would last for few centuries once utilized fully. We are exploring space for other materials that fulfil the fossil need, but we need to look for renewable and unlimited options. It is the only dependable solution to lifelong receive power like solar energy, tidal, and wind energies.

Conclusion on Pros and Cons of Nuclear Fission

A promising future is expected for nuclear energy and the countries having atomic fossils. As Middle-East Asia is enriched with petroleum, the nations having nuclear fossils will have a huge amount of exports in the future. However, nuclear fission is yet an underdeveloped process, and its operation on the earth's surface is still not properly operational. While the whole world has an abundance of nuclear weapons, its productive utilization for industrial and functional use still needs more research which is quite unbelievable. 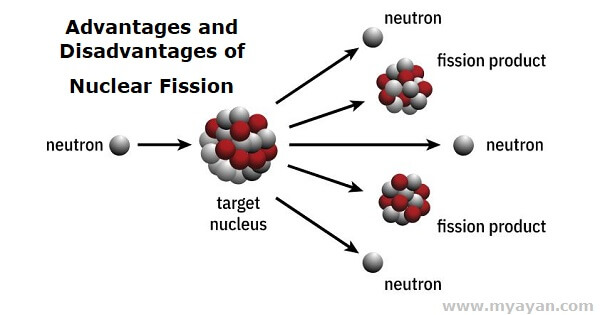 What are the advantages of using nuclear fission?

The main advantages of using nuclear fission are that it can be easily controlled through its fuel, the energy generation is very efficient, and there are no greenhouse effects.

How does nuclear fission create power?

Nuclear fission creates power in a Nuclear Power Plant; when atoms of enriched uranium or plutonium break apart, their neutrons cause other uranium atoms to split, releasing heat energy.

What is the disadvantage of nuclear fission?

Despite that, a lot of individuals still claim that it is safe. There are many myths and misconceptions about the usage of nuclear power. One such misconception is that the radiation produced during a fission reaction is harmless to humans and animals. Radiation sickness, cancer, and other ailments linked to radiation are all significant concerns for employees at nuclear power plants.

Why is nuclear fission reaction considered better than fusion?

Fusion is an exciting option because it creates less radioactive material than fission and virtually limitless fuel supply. Fission is the shattering of a heavy, unstable nucleus into two lighter nuclei, while fusion is joining two light nuclei that generate a lot of energy.