The US and Mexico offer dual citizenship to each other's citizens. This means that if you are a citizen of both countries, you can hold passports from both countries and enjoy the rights and privileges of each. Mexico's indigenous population is estimated to be about 60% of the country's total population. According to official statistics, more than 11% of Mexico's native people live abroad, making it the world's most emigrant-populated nation. The United States has more than 10.9 million (documented and undocumented) immigrants, accounting for 98% of all Mexican migrants. You must know both pros and cons of dual citizenship before applying. Let's have a look at each in detail.

What are the Pros of Dual Citizenship US-Mexico?

There are certain pros of Dual citizenship US Mexico, especially if you relocate to US in order to switch permanently. On the brighter side of the picture, do remember the following benefits.

2. Tax Benefits are majorly considered the pros of dual citizenship

There are social security benefits of US Mexico dual citizenship. For example, if you are a dual citizen and retire in Mexico, you can collect your US Social Security benefits and your Mexican pension. You may also be able to qualify for health care benefits in both countries. Additionally, dual citizenship gives you the right to vote in both countries and hold public office in either country. Consult an attorney or the embassy of each country for specific requirements.

What are the Cons of Dual Citizenship US-Mexico?

You are subject to the laws of both countries as a dual citizen. If you are a citizen of the United States and a country with compulsory military service, for example, you might lose your U.S. citizenship if you serve as an officer in a foreign military that is fighting against the United States. In general, according to U.S. policy, people who are legally obligated to serve in the army abroad may be required to do so without jeopardizing their U.S. citizenship status; however, it's crucial to look at each scenario carefully because some situations may put your citizenship in danger.

2. Dual taxation is one of the feared cons of dual citizenship

You might be obligated to pay taxes in both countries as a dual citizen. For example, the United States requires its citizens to report their foreign income and assets on their U.S. tax returns. In addition, you might be required to pay taxes on your worldwide income if you are a citizen of a country with a citizenship-based taxation system.

Some people may feel torn between their loyalty to the United States and Mexico. This can be a difficult balancing act, especially if you have strong ties to both countries. Since you are a citizen of both countries, you may be called upon to serve in the military or other government service for either country.

Depending on the relations between the United States and Mexico at any given time, it can be difficult to travel between the two countries as a dual citizen. If there is political unrest or conflict, border crossings may be closed or restricted. Such cons of dual citizenship can make it difficult to visit family and friends or conduct business in either country.

If you choose to become a dual citizen of the United States and Mexico, there is a possibility that you could lose your citizenship in one or both countries. This could happen if you violate specific laws or fail to meet certain requirements, such as paying taxes or serving in the military. If you lose your citizenship, you may be barred from returning to the country where you lost your citizenship.

There are different laws for online businesses that can be very confusing and difficult to follow. This is because the internet has no geographical boundaries, and businesses need to comply with the laws of the countries they are targeting. For example, a company based in the US may have to comply with the laws of other countries like the European Union or Australia when targeting customers in those regions. This can be a costly and time-consuming process.

Conclusion on the pros and cons of dual citizenship

The US-Mexico dual citizenship can provide several benefits for individuals, including greater access to social and economic opportunities. However, there are also some potential drawbacks to consider before obtaining dual citizenship. It is essential to weigh all the pros and cons carefully before deciding if dual citizenship is the right choice to make. 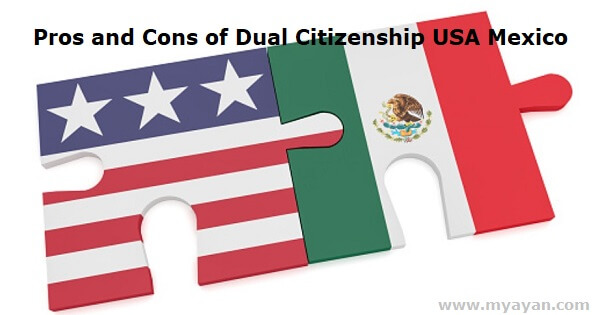 What are the benefits of having dual citizenship in Mexico and USA?

A person can have dual citizenship, which means they can be a citizen of two nations simultaneously. It allows you to work, go to school, vote, obtain a Mexican passport, own property, and take advantage of other country-specific perks.

Does the US allow dual citizenship with Mexico?

According to the consular staff at the Mexican Embassy in Ottawa, there is no formal agreement between Mexico and the United States on dual citizenship/nationality; nevertheless, because of the current constitution (which was passed in 1998), individuals are allowed to have two nationalities.

Is there a downside to dual citizenship?

The disadvantages of being a dual citizen include the risk of double taxation, the time and cost involved in obtaining dual citizenship, and the fact that the laws of two nations bind you.

Can a US citizen also be a Mexican citizen?

Yes, the United States allows for triple citizenship and does not require naturalized US citizens to give up their foreign nationalities or other nations' citizenship.