Advantages and Disadvantages of Hydroelectric Energy

What is Hydroelectric Energy?

Hydroelectric energy is obtained from water (by converting running water's kinetic energy into electrical energy), the most commonly used renewable energy source on earth. According to the 2019 Hydropower Status Report, hydroelectricity gave us a whopping 21.8 GigaWatts of energy and grew by 9% over the year.

Around 24% of the world's population relies on Hydroelectric Energy, while around 12% of the United States' electricity supply water power sources. According to the US Energy Information Administration, Most hydroelectricity is produced at large dams built by the federal government. Many of the largest hydropower dams are in the western United States.

What are the Advantages of Hydroelectric Energy?

Billions of people worldwide depend daily on hydroelectric energy, and China, the USA, Canada, and Brazil are the major countries generating and supplying electricity to their citizens. Electric energy lightens up homes, factories, hospitals, and schools. Here are the Advantages of Hydroelectric Energy that speak in this energy source’s favor.

Hydroelectric energy will be available as long as water exists. Hydroelectricity is possible. Water is going to be on earth to nurture living beings. There are numerous natural water sources such as Rain, lakes, and glaciers, backed up by natural processes like condensation and evaporation.

Low emissions and carbon footprint are the few appealing advantages of hydroelectric energy that need mentioning. The generation of hydroelectricity does not release toxic emissions into the environment. Electricity produced through running water is clean and carbon-free and lowers greenhouse gas emissions.

The large turbines rotating in reservoirs and dams can produce electricity that can lighten residential and industrial areas. Unlike wind and solar energy, hydroelectric energy doesn’t depend on external sources such as sunlight or wind except for running water.

The lakes or reservoirs constructed for electricity generation can also be used for recreational purposes. This not only gives employment opportunity to locals but also helps flourish other side businesses such as tourism, fishing, water sports, and swimming. For example, lakes can be used as tourism and picnic spots. Lake Mead situated near the Hoover dam had a record of 7.5 million visitors in 2018.

Hydroelectric power stations are designed and built to reap benefits that can last longer up to centuries. Populations depend on reservoirs and dams as they are the ultimate source of energy and clean water supply that can be used for irrigation, domestic, and commercial purposes.

What are the Disadvantages of Hydroelectric Energy?

With the advantages of hydroelectric energy, some concerns question the credibility of the sources and structures the system is built on. Here are some threats and risks dams and reservoirs pose to humans and wildlife.

The dam stops the natural flow of water, which also restricts the movement of marine animals. Building large reservoirs can also hinder animals' migration from one suitable location to another according to changing seasons. Building dams act as a blockage for many fish species and prevent them from reaching their breeding ground, which affects many animals that rely on those fishes for food. Many plants also tend to survive on the riverside habitats; not only the plants will stop growing, but it also would wipe off eh animals which acclimate in such areas.

Given the current scenario, a limited number of places are remaining in the world which are suitable for establishing hydropower plant construction. On the other hand, some places are not close to major cities or populations that could fully benefit from the energy. Investing time and money in such locations would be futile for the authorities.

Building and constructing larger structures require a substantial amount of investment which also adds up with respect to time. Hydropower projects need to be considered in accordance with the available resources, available deadline, and pros and cons of the surrounding vegetation and population. As a result, they cost more than similarly sized fossil fuel plants.

A little change in dam water temperature can negatively impact the plants residing at the bottom of the reservoir. Although these structures are a source of clean and green fuel for survival, unsuitable temperature conditions can kill the plants; in turn, they may start releasing large quantities of carbon and methane gases into marine life.

No adequate water in the drought-hit areas can lead to project failure. Electricity can only be generated when there’s water held up in dams and reservoirs at a certain level. While Hydropower is the most reliable renewable energy available, it depends on the amount of water in any given location. The performance of a hydropower plant could be significantly affected by continuous climate changes.

Conclusion: Since hydroelectric energy is the easily affordable source for everyone, projects based on hydropower have steadily been growing as the world moves to more sustainable energy options. It’s worth noting that there are many advantages and disadvantages of hydroelectric energy. However, you put the pros and cons on the scale; the benefits will outweigh the risks and limitations. Hydroelectric energy is still the best and 100% safer option when compared to solar and wind energy. As for the future, technological advancements hold the answer to the problems we may face in the future. 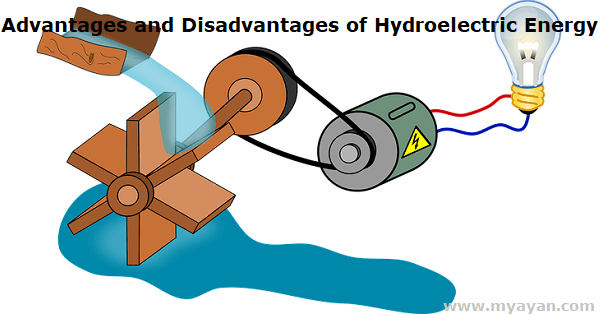 What are 3 advantages of using hydroelectric power?

Flood control, irrigation assistance, and clean drinking water are just a few of the benefits provided by hydropower. Hydropower delivers dependable energy at a low cost and a long lifespan over other energy sources. Hydropower is reasonably priced.

Hydropower is a clean, renewable source of power. It's essential to keep in mind, though, that moving water poses a significant risk of drowning. Approaching a hydropower plant is just as dangerous as approaching a waterfall.

How is hydropower not safe?

Dams, reservoirs, and the operation of hydropower generators do not produce air pollutants on their own. However, dams and reservoirs may have an impact on the environment. A dam that creates a reservoir (or diverting water to a run-of-river hydroelectric plant) can disrupt fish movement.

Hydropower and reservoirs are frequently referred to as clean energy because they do not burn fossil fuels to generate power. Recent studies have shown that dams and reservoirs significantly contribute to climate change, producing greenhouse gases.