Pros and Cons of Democrats 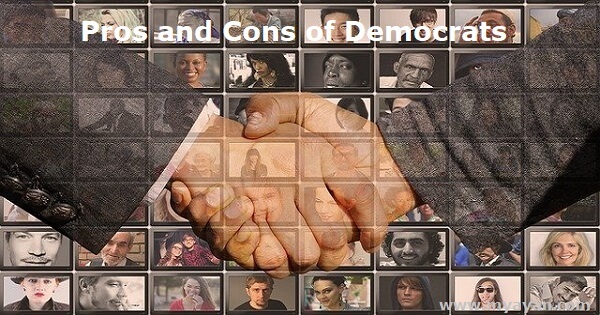 Democrats are the individuals who administer the system that was chosen by the people themselves, allowing them to choose who they want to be ruled by. American voters often debate the pros and cons of democrats. A democratic party is typically associated with liberal policies, while the Republican Party is more conservative. Here is a look at what the democrats do and what they stand for.

Who is a Democrat?

In the United States, a Democrat is a member of the Democratic Party. The party has been around since 1828, making it one of the oldest still-existing parties in the world. Today, the party primarily focuses on social issues and economic justice. They believe in expanding civil rights, providing healthcare for all citizens, and protecting the environment. The current president of the United States, Joe Biden, is a Democrat.

The Democrats’ central belief is that government should represent the people it governs. They want everyone to have an equal say in how their country is run. This includes ensuring that everyone has access to education, healthcare, and other basic needs. Additionally, they believe in taking care of the environment and combating climate change. Before exploring the pros and cons of democrats, you also need to know about their policies.

What are their policies?

Some of the policies that Democrats support include expanding access to healthcare, increasing the minimum wage, investing in renewable energy, and making college more affordable. They also support stricter gun control measures and a woman’s right to choose whether or not to have an abortion.

What are the Pros of Democrats?

Let’s look down into the Pros of Democrats for the general public and Administration.

1 They focus on the people

The primary belief of democrats is that the government should be for the people and by the people. They want to ensure that everyone has an equal say in how the country is run. This includes ensuring everyone can access basic needs like education, healthcare, and a liveable wage.

2. Environmental care is one of the pros of Democrats

Democrats also believe in taking care of the environment. They support policies like investing in renewable energy and combating climate change.

3. They believe in civil rights

Democrats have always been at the forefront of expanding civil rights. They were instrumental in passing laws like the Civil Rights Act and the Voting Rights Act. Additionally, they support LGBTQ+ rights and a woman’s right to choose.

4. They want to reduce inequality

One of the main goals and pros of Democrats is to reduce inequality. They believe that everyone deserves an equal chance at success, regardless of their background or identity.

What are the cons of Democrats?

Besides the advantages, there are cons of democrats which must be considered. Some of them are:

1. They can be too idealistic

Some people view the Democrats as being too idealistic in their beliefs. For example, they may believe that healthcare should be free for all citizens, regardless of whether or not it is economically feasible.

2. Reliance on government is among the major cons of democrats

Another criticism of the Democratic Party is that they rely too much on government intervention. This can lead to larger government bureaucracies and more debt.

3. They are not always fiscally responsible

Some people argue that the Democratic Party is not always fiscally responsible with taxpayer money. They may support policies that are costly and not economically viable in the long term.

4. They can be too liberal

Some voters may view the Democratic Party as too liberal in its policies. For example, they may support strict gun control measures or a woman’s right to choose abortion. Liberalism is often considered among the cons of democrats.

5. They have been accused of being too divisive

In recent years, the Democratic Party has been accused of being too divisive. They have taken stances on controversial issues like gun control and abortion. This can make it difficult for them to appeal to voters in the middle of the political spectrum.

6. They are sometimes seen as unorganized

Another criticism of the Democrats is that they sometimes seem unorganized and chaotic. This can be due to infighting among party members or a lack of clear leadership.

Conclusion on the pros and cons of Democrats

The Democrats have long been the favorite of the people. They are committed to ensuring that every citizen in our country has an equal opportunity to succeed. However, with a new administration in power, some question whether the Democrats still represent the best interests of all Americans. Hopefully, the pros and cons of Democrats have helped you decide which party best represents your values and beliefs.

What are the pros of democrats?

The primary belief of democrats is that the government should be for the people and by the people.

What is the biggest problem with democrats?

The criticism of the Democratic Party is that they rely too much on government intervention. This can lead to larger government bureaucracies and more debt.

The policies of the democratic party include expanding access to healthcare, increasing the minimum wage, investing in renewable energy, and making college more affordable.

What are the drawbacks of being a democrat?

The drawbacks of being a democrat include being too idealistic, too reliant on government intervention, and not always fiscally responsible. Additionally, the party has been accused of being too divisive and unorganized.