Advantages and Disadvantages of eSIM

You’ll no longer need to carry extra SIM cards to change operator anymore. eSIM, or embedded SIM cards, are the next step in wireless technology. The eSIM is a new technology that lets you switch providers without swapping out your old SIM card. eSIMs are the newest technology to hit the market, and they have many benefits. Leading Smartphone companies have started releasing devices with eSIM technology and Apple, Motorola, and Samsung are few to mention. But, there are also disadvantages of eSIM technology you should be aware of before making a purchase.

For more than 2 decades, SIMs (Subscriber Identity Module) has been used to identify and authenticate subscribers on mobile networks. But the rise of the Internet of Things (IoT) means that our devices are no longer constrained to one network operator; they connect with many other networks across the world, including some managed by third parties, like smart buildings or vehicles. However, this creates a challenge for operators.

You've undoubtedly used a SIM card if you've ever owned or utilized a cell phone. The SIM, which stands for subscriber identity module, instructs the device on which network to connect and how. It also keeps track of all of your contacts, encryption keys, and other personal information, and it's everything that makes your phone unique.

What are the Advantages of eSim?

eSIM is advantageous for individuals who change their SIM frequently. That may be perfect for persons who travel across multiple nations and use several service providers in each one. You won't have to worry about physical cards while travelling with eSIM. Call your mobile provider, and they'll perform the switch for you.

eSIMs allow smartphones and smartwatches to connect to the internet without using a physical SIM card, hence reducing the hassle. This means that once your device is paired with an eSIM service or network, it will easily switch networks and services.

If one company starts charging unfair prices for their data plan, which happens, you won't have wasted money buying services through them, and you'll simply buy another service from somebody else who offers better rates.

Without a physical SIM card, you won't have to wait for the company that provides your network service to send someone around with one. Instead, they can connect your device through an online connection. This means less time spent waiting at home on hold with customer services and more time using your smartphone. These advantages of eSIM are worthwhile if you are a frequent traveller needing to switch between operators.

Again, without a physical SIM card, you won't have to pay for the one-off purchase. Instead, your service provider will be able to send updates through an online connection so that there's no need to buy replacement SIM cards when they get lost or damaged. This means less money wasted on things like trips out to find somewhere with free WiFi just so that you can upgrade your SIM card.

4. Variety of Choices are notable advantages of eSIM Technology

If your device is compatible with eSIM technology, you'll be able to choose which network and service provider you want through your phone or tablet settings. This means, that if there's a particularly good deal going for data plan prices at one company but not another, then it won't cost much more to change! You can switch between networks without having to buy new devices - saving both time and money.

eSIMs don't require a physical SIM card to be installed, which means that you won't have to carry around any extra cards and lose them. You can connect your device through an online connection and then switch between networks without even having to think about it.

This also makes things easier for travelling or going abroad - especially if you're using multiple devices. Plus, since there's no need for a physical SIM card slot inside the phone/tablet itself, manufacturers can make thinner devices with larger batteries so they last longer.

What are the Disadvantages of eSim?

While eSIM is an exciting new technology, it may not be right for everyone. If you want to use smaller carriers, eSIM isn't the way to go. The Pixel 2 from Google can cost as much as the iPhone X, and the Samsung Galaxy S9 Plus has a bigger screen than both of these phones combined and costs about $100 more. Wait for eSIM to arrive in mid-range devices if you don't want to spend a fortune on a high-end phone.

The technology is still far from users with older versions of smartphones. Unfortunately, not all devices are compatible with eSIM technology; this means that you'll need a physical sim card inside your device to use the service. However, most new phones from Apple, Motorola, and Samsung and smartwatches will be compatible with it.

2. Limited availability is one of the common disadvantages of eSIM

eSims are not yet widely available in the UK and US, although this is likely to change over time. This means that if you buy a new phone or device, it's unlikely to be compatible unless you specifically make sure when buying. Provided the phone you are buying is compatible, you'll need to make sure the operator provides eSIM support as well.

Although eSIMs are becoming more popular, it's still not the most common technology, so many companies have yet to join in. This means that if you're looking for a particular device, then chances are there won't be much choice when finding one with an eSim slot! You'll likely need to buy from your network provider or someone who specializes in pre-owned devices instead.

Although it may seem like there are more disadvantages to eSIMs being a new technology, the truth is that many people prefer physical sim cards. This means you can swap them between devices and won't need to buy a replacement if the hardware gets damaged or the device is lost or stolen.

Plus, since they require less space than an eSim card slot inside your device, manufacturers can make thinner phones with larger batteries, so they last longer too.

Since eSIMs are becoming more popular, network providers will likely offer better deals to stay competitive. This means it's cheaper (and easier) for customers to switch plans or networks if they think there might be a better deal elsewhere.

Although having less choice in sim cards can initially seem like a disadvantage of eSIM networks, the truth is that this actually makes your choices much easier, especially when you want the best plan available at any given time.

Conclusion on pros and cons of eSIM

For the majority of individuals, eSIM will not have a significant impact. The majority of users do not change carriers regularly. If you plan to use the switching functionality often, eSIM will be beneficial. There won't be much of an effect if you don't intend to switch carriers frequently with your phone. The Pros and cons of eSIM technology scale equally for frequent travelers and regular users from an efficiency standpoint. 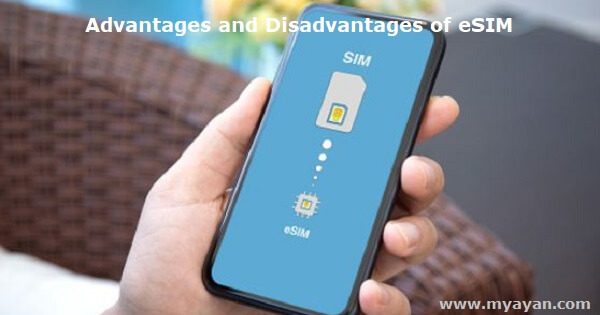 What is the disadvantage of eSIM?

Except for sending a text message, using an eSIM card is significantly more complex than making a phone call. An eSIM card cannot be remotely accessed or copied, making it more resistant to fraud and theft.

The one major drawback of a physical SIM card is that it must be physically inserted into the device. Because it's so much more convenient, there are many more advantages to using an eSIM. It is integrated, which not only gives extra space for other components or maybe a larger battery, but it also allows manufacturers to reduce the size of their devices significantly.

How does eSIM work?

eSIM is closely associated with Apple's plan for iPad integration inside aircraft cabins. eSIM allows, in theory, to use the maximum mobile phone number on all other devices. An eSIM is programmed remotely and can be changed at any time. It also simplifies the process of changing carriers.

The infinite number of possible combinations programmed into an eSIM makes it very secure. In addition, the eSIM is encrypted and acts as a virtual SIM card with a unique identifier that another device or another carrier cannot use. This ensures better security against fraud and theft.