Advantages and Disadvantages of Energy Sources 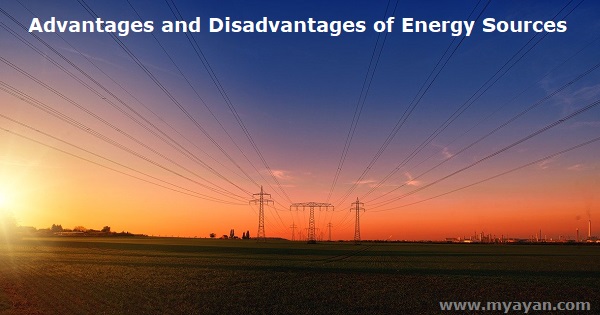 Planet earth depends on energy, and so is every human being. However, CO2 emissions and other environmental concerns have lead countries to switch to different energy sources. Some energy sources are cleaner than while the others pose a threat to humankind itself. Coal, Petroleum, Fossil Fuels, Wind and Solar energy are the key role players to contribute to the global economy. The Advantages and Disadvantages of Energy Sources evaluate how different sources can power up and fuel the world but at what cost.

What are Different Energy Sources?

What are the advantages of energy Sources?

Every type of energy has a purpose and application obtained from different sources. Automobile, Industrial, Power stations, and even the General public rely on energy to accomplish day-to-day tasks. There are many advantages of energy sources in our lives, some of which are listed below.

1. Domestic and Industrial Electricity is one main advantage of Energy Sources

Without electricity, the world would still be in darkness. Electricity has become an integral part of everyone’s life. From industries to domestic purposes, humans depend on electricity constantly to carry out business and domestic tasks successfully.

A world running on carts as a means of transportation would be hard to imagine today. Thanks to the energy sources available on the planet, that a month's journey is now coverable within minutes.

The energy industry have contributed majorly to global economy. Along with the earnings performance of energy-producers are largely driven by the supply and demand for worldwide energy.

The energy sector industries such as Oil & Gas drilling, refining & pipelining, and mining have also contributed to modernization and globalization greatly.

Industrialization led by oil & gas, hydroelectric power stations, and nuclear power plants has generated jobs for billions of citizens over time. The more advanced we get, the more jobs will be available in the energy sector.

According to the Environmental Energy Study Institute, the renewable energy sector employed 11 million people in 2018, 700,000 more than in 2017. The job trends also show a gradual increase in the current statistics compared to the previous years. Thus upcoming employment opportunities are the biggest advantages of energy sources.

5. Many Energy Sources are Environment Friendly

Most renewable energy sources such as Wind, Solar, Tidal, Nuclear, Water, and Wave energy are clean sources that are also not harmful to the ecosystem. Humans and the surrounding wildlife won’t be affected by such energy sources as they do not emit hazardous greenhouse gasses or chemicals into the environment.

What are the Disadvantages of Energy Sources?

Despite being most favourable alternatives, different energy sources are also badly known for their demerits. The following segments list some common to severe disadvantages of Energy Sources.

1. Hydrogen is Difficult to Store

Even though Hydrogen is the cleanest energy source, its storage and transportation is extremely difficult. Being lighter than and highly combustible gas, there are numerous challenges to face as it needs dedicated facilities. Also, Hydrogen leakage in industrial areas may lead to severe hazards.

2. Emission is one of the biggest disadvantages of energy sources

Even if there is a sustainable alternative to these fuels, humankind will take years to switch to an economical energy source permanently and wholly.

From Deepwater Horizon to the Chernobyl disaster, the plants and establishments for fuel extraction have always been in the spotlight for artificial disasters. Dams, Nuclear plants, and even gas stations pose a threat to domestic and industrial areas.

Such incidents intervene in wildlife and degrade the value and fertility of the land in the nearby areas. Let’s not forget that major accidents can also wipe out the entire population.

Everything from planning to construction comes at a substantial cost. For example, setting up Oil drilling plants and nuclear power plants is more expensive and time-consuming. Also, installing solar cell panels on a large scale takes up space and money, which may be one-time. Cost is often difficult to incur, which is one of the common disadvantages of energy sources.

5. Most energy sources are weather dependent

Some energy sources aren’t always available; for example, Solar cell panels will be ineffective in the rain or storms. Likewise, windmills only work in a windy atmosphere, and tidal energy is generated through sea tides only.

Conclusion on Advantages and Disadvantages of Energy Sources

There are both merits and demerits of the consumption of different energy types. Moreover, there are more disadvantages associated with the use of fossil fuels, coal, and gasoline. The only good thing about them is they are available at a low cost.

What are the advantages of sources of energy?

1. A viable alternative to fossil fuels.
2. Clean energy source. It does not pollute the air or water.
3. Some sources are renewable and long-lasting.
4. Some forms of energy are free and available throughout the world.
5. The emission of air or water pollution is minor.
6. Great potential for powering homes.

What are the disadvantages of natural sources of energy?

Which is a disadvantage of most of the renewable sources of energy?

Inexperienced source is one of the primary disadvantage of sustainable energy sources is the irregular supply.

What are the types of energy resources?