Pros and Cons of NATO

The North Atlantic Treaty Organization also called the NATO Alliance, is a political and military alliance of 30 countries from Europe and the US. The organization's primary goal is to provide collective security for its members against potential aggressors. Being allied with 30 nations means the rest of the countries are not supported by the organization. There are many pros and cons of NATO; for the allied nations, the organization has support, but for the non-allied, it's non-cooperative. NATO has been involved in several conflicts and operations since its formation, most notably the Cold War, the Kosovo War, and the War in Afghanistan. The organization is currently facing new challenges, such as terrorism, cyber-attacks, and Russian aggression. NATO continues to adapt its capabilities and strategies to meet these evolving threats.

In order to achieve these goals, NATO engages in various activities such as:

What are the Pros of NATO?

The North Atlantic Treaty Organization has several advantages that make it a powerful alliance. These include:

Since many European nations are allied with NATO, one of the main goals of NATO is to maintain peace in Europe. It does this by deterring potential aggressors and promoting stability in the region. The objective of Nato when it was created in the wake of World War II was to "secure peace in Europe, to promote cooperation among its members, and to protect their freedom."

Members have committed themselves to resolving conflicts peacefully–and for more than 70 years, there have been no large pan-European wars. In 2022, however, Nato Secretary General Jens Stoltenberg stated that the continent's peace had been "shattered" by the Russia-Ukraine conflict, which he called "on a scale and type we thought belonged to history."

2. Collective Security is among the pros of NATO

NATO countries have committed to collective security, meaning that they will come to the aid of any attacked member. This has served as a deterrent to potential aggressors, as they know that they would be facing the military might of the entire alliance.

The alliance's mission in Bosnia and Kosovo in the 1990s was to prevent the conflicts that were flaring up throughout the region. It is currently engaged in Afghanistan, attempting to hinder terrorist organizations from establishing a haven to train and plan. The group of countries has even set its sights on battling issues with privacy in areas like Somalia's Horn.

The objectives of NATO aren't always related to warfare. Since 2016, the organization had dealt with the migrant crisis in Europe, when 2.2 million people sought political refuge. It also helps refugees relocate to their new homes, file visa applications, and more.

The NATO alliance provides stability and security, essential for promoting economic growth. This has been especially beneficial for countries formerly part of the Soviet Union, as they have been able to transition to market-based economies more smoothly.

The members of NATO share common values, such as democracy, individual liberty, and the rule of law. This helps foster cooperation among the countries and allows them to work together towards common goals.

In recent years, NATO has been working on bolstering its cyber defenses. This is in response to the growing threat of cyber-attacks, which can be used to disrupt critical infrastructure or steal sensitive information.

The alliance has set up a Cyber Incident Response Center, which helps member countries deal with cyber-attacks. It also offers training and resources to help members improve their cyber security.

The open door policy is one of the Pros of NATO alliance. If a nation is willing to fulfill the obligations and standards of membership, it may join the group of allies. This includes efforts that contribute to NATO's security, such as democracy, rule of law, and reform. Since 1949, 17 additional nations have pledged their support in order to prevent future conflicts after the original 12 countries joined together.

What are the Cons of NATO?

Besides the advantages, there are several cons of NATO for allied as well as non-allied nations such as Ukraine. The following are some major drawbacks worth considering.

The United States is the main cost contributor to NATO's $2.8 billion annual budget. The 2014 funding round provided 3.61% of its national GDP to the organization. No one else meets or exceeds 2.5% GDP in their contributions, but the NATO standard is only 2%.

Apart from the United States, Greece, the United Kingdom, Estonia, and Poland are the only other countries that meet their targets. Luxembourg contributes just 0.44 percent of its GDP, while Canada, Slovenia, Spain, and Belgium contribute 1 percent of theirs. This means that many countries are not paying their fair share for the common defense. This puts a strain on the organization's finances and can lead to resentment among nations carrying the weight.

2. Risk of mission creep is one of the common cons of NATO

NATO has been involved in several operations over the years, both inside and outside of Europe. While most of these have been successful, there is always the risk of mission creep. This is when an organization gets involved in activities beyond its original mandate. This could mean getting dragged into conflicts that it is not prepared or equipped to handle for NATO.

3. Some members are not up to snuff

Not all of NATO's members meet the organization's standards for democracy, the rule of law, and human rights. This is because the criteria for membership are not as strict as they should be. As a result, several countries in NATO do not share the same values as the rest of the organization. This can lead to tension and division among members.

4. Potential for conflict with Russia

NATO's expansion eastward has put it in direct contact with Russia. While there is no desire on either side for conflict, the possibility always exists. The two organizations have very different views on several issues, and there is little trust between them. If tensions were to escalate, it could lead to a dangerous situation.

NATO is a large and bureaucratic organization, which can make decision-making slow and difficult. This can be frustrating for countries that need quick action in response to a crisis.

Nations like Russia don't seem to be affected by the alliance, which is among the major cons of NATO. The alliance has been criticized for being ineffective in dealing with some of its challenges. This is because it is a voluntary organization, and members are not legally bound to comply with its decisions. Additionally, the organization does not have its own military force and must rely on member countries to provide troops for operations. This can make it difficult to get things done promptly.

The organization has been criticized for being opaque in its decision-making process. This is because much of the organization's work is done behind closed doors. This lack of transparency can make it difficult for member countries to hold the organization accountable.

NATO has been both successful and unsuccessful in various ways throughout its history. It is important to weigh the pros and cons of NATO membership before making a decision about whether or not to join. There are many factors to consider when it comes to this complex issue, but hopefully, this article provides some valuable insights that will help you stay informed. 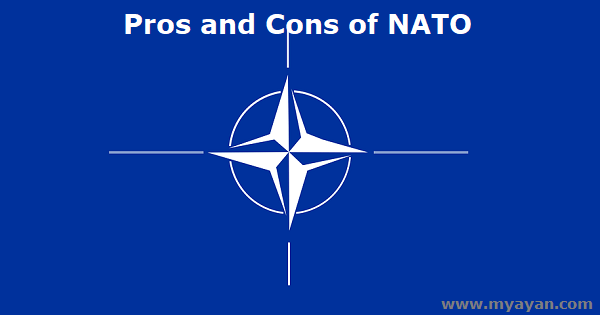 What is the advantage of NATO?

NATO benefits from the fact that its members' military expertise and capabilities may be utilized. Tanks, submarines, and fighter planes are examples of such assets. When the Alliance decides to conduct an operation, it asks member nations for troops and equipment to be placed under NATO command.

Is NATO a good organization?

NATO is not only an important first line of defense but also a crucial one. While the immediate danger of war between Russia and the United States is low, both countries and other states pose a serious and ever-changing hazard to the United States and its allies. NATO is an absolute must.

How does NATO prevent war?

The capacity to deter and defend is bolstered by an appropriate combination of nuclear, conventional, and missile defense capabilities that work together. An array of civil and military assets are available to support these capabilities and the posture.

Is NATO more powerful than the UN?

The UN is likely to have a greater worldwide impact, but NATO, for example, is far more powerful militarily. Globally, intergovernmental organizations such as the European Union exercise significant power.