Advantages and Disadvantages of Landfills 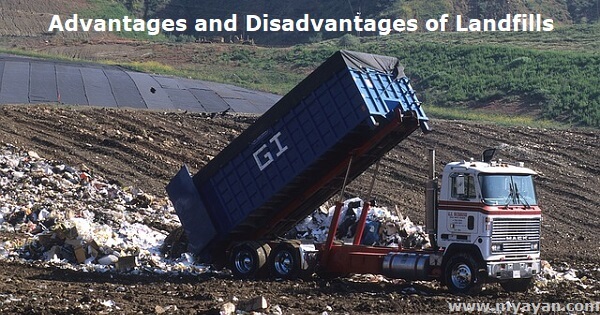 With the growing population, the problem of garbage disposal would pose serious environmental issues. As for now, all the waste management companies have the benefits of landfills as these locations are suitable for garbage disposal. But with time speeding forward, these landfills will be choked with more waste which experts predict would be challenging to manage. Perhaps, it's not too late to consider the Advantages and Disadvantages of Landfills and take sustainable steps.

When most people think of the word "landfill," they don't know what it is. Landfills are sites where trash and other waste materials are dumped for storage until they decompose enough to be turned into dirt or recycled.

Landfills are neither simple dumps nor holes in the ground. Instead, solid waste is simply covered with dirt in a primary landfill. This is crucial because it lowers the number of landfill gases, which can be harmful to the environment and living things by mixing in the atmosphere.

Landfills are manmade locations used as dumping grounds for trash. Landfills are a common feature of many communities. They help dispose of household garbage, landscaping materials, and other garbage that is not recyclable or biodegradable. But, there are pros and cons of landfills when dumping plastic and non-perishable waste, posing a threat to the ecosystem.

What are the Advantages of Landfills?

Advantages of landfills include storing a lot of trash at one time, having fewer labour costs than recycling plants, and reducing air pollution by not producing methane or toxicity into the open air. As per the recent report by LMOP, the US has over 1250 landfills handling the entire nation's garbage. If you are wondering what good they are, gander through the following benefits of landfills.

These dumping facilities are constructed to create the perfect dumping ground for waste of all types. The land is covered with dirt which reduces the emission of dangerous landfill gases that can negatively impact life in the proximity.

Landfill gases are created when the decomposing waste in a landfill produces methane, carbon dioxide, and other gases. Landfills reduce this by mixing waste and the soil together.

These dumping facilties are generally constructed away from population and wildlife with an impermeable liner to prevent gas leakage into surrounding soil or groundwater. In addition, these facilities create a controlled environmental effect so that the landfill gases or garbage do not escape into the atmosphere, where they could cause severe health issues.

3. Prevention of waste from spilling

Landfills are located far away from waterbodies in perfect dumping grounds, preventing waste from spilling into oceans or civilized areas. Because landfills are built on solid soil or rock foundation, they also prevent seepage, so more liquids go back down through natural water drainage systems instead of entering waterways where marine life could become endangered or destroyed.

4. Protection of water supply is among main advantages of landfills

Another great function of landfills is that they separate farmlands from wastelands. This reduction also protects the wildlife by keeping harmful chemicals out of sources like rivers, lakes and reservoirs where drinking water comes from.

Many modern landfills are equipped with leachate collection systems that collect liquid drainage for treatment or safe disposal and gas wells to monitor hazardous gasses produced by decomposing wastes to prevent any potential leakage problems.

5. Landfills make it easier to recycle

The dumping grounds can be used as repositories for recyclable materials. Because many types of waste are either not biodegradable or cannot be recycled in the recycling process, they take up valuable space in landfills and contribute additional landfill gases into our atmosphere when they decompose. The waste that isn’t decomposed can be recycled easily once it’s separated from the composed material.

What are the Disadvantages of Landfills?

However, they also have disadvantages that make them controversial among the public. People with nowhere to relocate have to face minor to major disadvantages of landfills. These problems include odours from decaying organic material, contamination, and the danger of fires.

Landfills are partially responsible for climate change. They produce greenhouse gases like methane, which is 25 times more potent than carbon dioxide when it comes to trapping heat in the atmosphere and causing global warming. These landfill gases also contain other chemicals that can cause health problems if released into the air dwellers breathe.

Another limitation of landfills is that it takes a lot of time and money to dispose of garbage. Even though landfills are the best way so far, they still cost millions each year to manage, which means taxpayers pay for this service in their water bills or taxes on landfill use.

Disposing waste also creates disposal sites that can become eyesores if not appropriately maintained or attract insects like bees because there will be nearby sources for food.

Another disadvantage of landfills is that they can displace people. This happens when a dumping site is built in a place where there are already existing communities, sometimes for several reasons like the economic benefit it might bring to those living nearby or simply because planners were not aware of their presence.

However, these new facilities may be hazardous to public health if mismanaged, so local residents who live near them have little choice but to move away, which causes upheaval and stress among families forced to relocate quickly.

4. Release of Toxic Waste is one of the major disadvantages of landfills

Finally, another disadvantage to landfills is that it can be dangerous and expensive to dispose of toxic waste. This means you should make sure your company properly segregates the different types of trash before they go into a landfill because biodegradable and recyclable materials will decompose at very different rates, which causes problems if mixed.

The last disadvantage to landfills is that they can create wastelands. In addition, once a landfill fills up and stops accepting new waste, the site must be monitored much more carefully than when in use because not all types of trash decompose at the same rate, so gases may still be emitted from rotting garbage for many years or even decades after being closed which creates an eyesore and potential safety hazard too.

Conclusion on Pros and Cons of Landfills

Although there are many advantages of Landfills, it's hard to deny how severely these dumping sites can impact the lives of locals. The open landfills in Russia are the best example of how disturbingly damaging these dumping sites can be for communities with nowhere to go. If constructed in abandoned areas, they can keep harmful chemicals away from the environment, but if built close to population or wildlife, sooner or later, they'll have drastic impacts.

What are the advantages of landfills?

What is a disadvantage of landfill?

The main disadvantage of landfills is that they can cause significant soil contamination. Over time, the earth will decompose if waste is deposited in those landfills. In the long run, dangerous chemicals would be released into the ground due to this process.

What are 3 negative impacts of landfills?

Landfills have a lesser impact on property values than larger landfills, with a 2.5 percent reduction in value. However, landfills bring risks such as odors, smoke, noise, insects, and water supply contamination. Minority and low-income neighborhoods are more prone to landfills and hazardous waste sites.

Why are landfills environmentally harmful?

Liquid waste is frequently disposed of in dry regions, and this process may create harmful gases (CO2 and methane) that are both greenhouse gases and contribute to global warming. In addition, landfills pollute the surrounding environment, including the water and soil and the local environment.

How do landfills pollute water?

When water penetrates waste, it picks up all sorts of pollutants, including metals, minerals, organic chemicals, germs, viruses, explosives, flammables, and other hazardous chemicals.