News in India is old news!

India is one of the most news-viewing nations in the world with almost 403 news and current affairs TV channels in almost 15 languages. To give a comparison, the total number of TV channels in India in 2016, as stated by the Information and Broadcasting Ministry of the Government of India, was 892 and among them, 403 or almost half were news and current affairs channels.

Here are some of the most popular news channels in India.

One of the oldest news channels in India, it started as “Star News” in February 1998 and was later renamed ABP News. It started as the first bilingual news channel serving news in both English and Hindi. However, starting in 2003, it has become a complete Hindi news channel. Its headquarters are located in Noida, India.

Started in 1999 by Zee Media Corporation Ltd., it is one of the oldest news channels in India. It also has a popular slogan, "Soch Badlo, Desh Badlo"(change thoughts, change nation), which is often cited. It is complemented by its sister channels (also part of ZEE), such as Zee Business and Zee 24 Ghanta. The channel is owned by Subhash Chandra, a Rajya Sabha member, and is headquartered in Noida, India.

Started in 2004 by Rajat Sharma, made popular by the TV show "Aap Ki Adalat", and his wife, it is one of the most popular news channels because of its sensationalized way of reporting news. The slogan of the channel is "Aap Ki Aavaz" (voice of public) and in 2018, it was rated as one of the best news channels in India. It is headquartered in Noida, India.

Launched in 1998, it is also one of the oldest news channels in India. It is considered to be one of the most trusted news channels and has won many awards, such as the Indian Television Academy Awards and Indian Telly Awards. The channel slogan is "Sabse Tez" (Most updated).

Launched in February 2008, it is a popular 24-hour Hindi news channel. The channel slogan is "Desh Ki Dhadkan" (heartbeat of the nation). It has several sister channels which complement it by providing region-specific news, such as India News Haryana or India News Rajasthan, or news in other languages, such as NewsX (English) or NewsX Kannada. Its news program "Ardh Satya" (half-truths) has won the prestigious Redink Awards. This channel is owned by Kartikeya Sharma, founder of iTV Network, and its headquarters are located in Noida, India.

Launched in 2003 as the brainchild of Prannoy Roy, chairman of New Delhi Television Ltd., it is one of the most popular Hindi news channels. It is complemented by its sister news channels NDTV 24x7, which broadcasts news in English, and NDTV Good Times, which is an infotainment channel.

It was launched in the year 2003. Its headquarters are located in Noida, India.

Launched in 2005 as CNN-IBN, it was founded by Rajdeep Sardesai, a news anchor, and author, as a news channel that broadcasts in the English language. Currently, it is owned by Network 18 and focuses on Indian regional news. It also works in collaboration with CNN, which provides international coverage for the channel. It is considered one of the best English-language news channels in India. Some of its news programs such as News Epicentre and Faceoff Tonight have become quite popular by presenting debates on current topics. Its headquarters are located in Noida, India.

Started in 2003 and hosted by Rajdeep Sardesai, who also launched CNN-IBN, it is a highly popular English-language news channel. India Today was started as a sister channel to Aaj Tak, which broadcasts news in Hindi. It is one of the four news channels owned by TV Today Network Ltd., part of Living Media, which also prints the India Today magazine. Its headquarters are located in Noida, India.

Starting in January 2006, with a partnership with Reuters, a famous news agency, it is one of the most watched English-language news channels. The channel stepped into the limelight mostly due to news shows and debates hosted by Arnab Goswami, a highly regarded news anchor. Newshour, hosted by Arnab Goswami, was the longest running news analysis program shown on any channel. It has once featured Parvez Musharraf, the former President of Pakistan. Other shows such as Frankly Speaking with Arnab, have featured well-known personalities, such as Benazir Bhutto, Gordon Brown, Hamid Karzai, Dalai Lama, and Hilary Clinton. 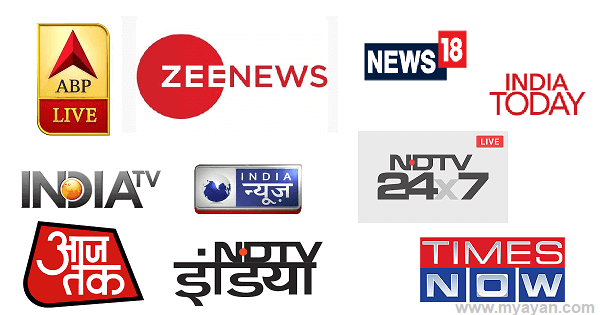 Which is the No 1 news channel in India?

Times Now is number one on the list of top news channels in India. The Times Network is a trailblazer in shaping the opinions of opinion-makers by delivering the most captivating and unparalleled content and latest news to the modern audience. The network has stamped its authority with differentiated content across multiple genres.

Which is the best news channel in India 2021?

Aaj Tak is one of the oldest and best news channels of India with the highest Target Rating Point in Hindi News Media. The next channel that to follow the list is Republic TV Bharat and was launched by the former News Editor of Times Now, Arnab Goswami.

Who is owner of NDTV?

The husband and wife team of Radhika and Prannoy Roy are the co-founders of NDTV. They each have a controlling stake in the company, holding 16.32% and 15.95% of the shares, respectively. The couple also jointly holds an additional 29.18% of the shares. Prannoy is the executive co-chairperson of NDTV and is considered one of its co-founders, along with his wife.

Is NDTV the best news channel?

According to a recent study by Oxford University and the Reuters Institute for the Study of Journalism, NDTV is India's most trusted private TV news network, with 76% of those surveyed trusting information from the network. NDTV is far ahead of other private networks on the list, including Zee, Aajtak, Times Now, and Republic TV.