Pros and Cons of Solitary Confinement 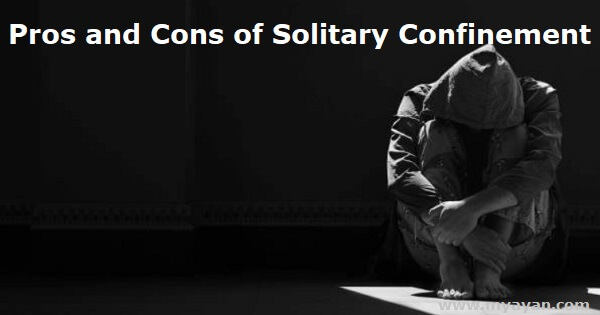 What are the Pros of Solitary Confinement?

Solitary confinement was first instituted in Walnut Street Jail in Philadelphia in the late 18th century. There were clear indication of improvement in inmates and prison’s life in terms of safety and behavioural changes. The following are some pros of solitary confinement you must consider.

2. It gives correctional officers another method to discipline inmates

Solitary confinement is a successful technique for correctional officers to manage aberrant conduct. Punishments allow wardens to maintain control in the jail. On the other hand, solitary confinement is not intended to be viewed favorably by prisoners and deters them from behaving in a way that would merit it.

3. It can reform an inmate’s character

According to its advocates, solitary confinement is intended to rehabilitate or reform offenders. It is thought that convicted persons alone with their thoughts can access their consciences, reflect on themselves, and comprehend the gravity of their crime.

4. Introspection Opportunity is one of the main pros of Solitary Confinement

The lack of social interaction in solitary confinement can lead to contemplation and reflection on one’s actions. In some cases, this may result in a prisoner having a change of heart and realizing the error of their ways.

5. It can protect vulnerable inmates from being harmed by others

Inmates safety from fellow prisoners is one of the potential pros of solitary confinement. Prisoners who are young, small, or have committed nonviolent offenses are especially vulnerable to victimization by other inmates. Solitary confinement can provide these individuals with a measure of protection from harm.

What are the cons of Solitary Confinement?

Despite the practice is helpful for both inmates and prison authorities, there are several cons of solitary confinement. In case of juveniles, the story can be different. Let’s have a look at the drawbacks.

If someone is isolated in a cell, he would be stripped of the feeling of having control over his surroundings, resulting in increased anxiety, paranoia, and claustrophobia. Most prisoners who were put under such punishment have tried to gain control over their surroundings by resorting to self-destructive behavior.

One of the main cons of solitary confinement is the psychological impact on inmates. Studies have shown that being isolated from social interaction can lead to mental health problems such as anxiety, depression, and paranoia. In some cases, prisoners have even resorted to self-harm and suicide due to the psychological effects of solitary confinement.

Solitary confinement can be defined as torture under certain international human rights conventions. That implies it violates human rights. The UN Convention Against Torture, for example, clearly defines torture as an action that causes severe pain or suffering, either physical or mental, whether intentional or unintentional, for punishment, intimidation, information, or otherwise.

Inmates are usually shackled and bound, with their heads and legs covered. They're brought to solitary confinement cells without access to sunlight or fresh air, where they may be held for as long as 23 hours per day. The only time an officer comes is to remove them from the cell before breakfast or supper. Guards would keep track of inmates' activities using video cameras while communicating with control booth staff members via vents. All procedures are carried out electronically.

5. It might cause prisoners to have personality and mental health disorders

Those who are cut off from society would be more susceptible to mental illnesses like schizophrenia. They could experience delusions and hallucinations, become extremely paranoid, or exhibit signs of mental stress, losing their grip on reality.

6. It provides no real purpose for rehabilitation

The main goal of criminal rehabilitation systems is to allow offenders to change themselves and become something greater than they previously believed possible. On the other hand, solitary confinement's primary aim is frequently to let time go by as quickly as possible. Moreover, rehabilitation necessitates human contact, so isolation is ideal for long-term protective custody or administrative segregation periods. Anything more would be punitive and inhumane.

Is solitary confinement a good thing?

Solitary confinement, a common practice in prisons and jails throughout the United States, has been proved via a large body of research to have detrimental and long-term negative effects on those held there, with no evidence of enhanced security for the correctional facility or community.

What are the three negative effects of solitary confinement?

Solitary confinement causes some people anxiety, depression, suicidal thoughts, and psychosis. The practice also has a detrimental impact on physical health; it raises the risk of various issues, including fractures, blindness, and chronic pain.

What is wrong with solitary confinement?

The UN Subcommittee on Prevention of Torture has also found that solitary confinement may cause psychological problems, mental anguish, and self-harm among prisoners, possibly increasing reoffending.

Is solitary confinement cruel and unusual?

How long does it take to go crazy in solitary confinement?

Inmates who have been isolated for a long period, even as little as 15 days, might suffer irreversible damage to their minds. The effects can range from anxiety to paranoia to the inability to think logically. When jailers isolate people with mental illness, the consequences are much more serious.