Disadvantages of Internet Use and Communication for Students 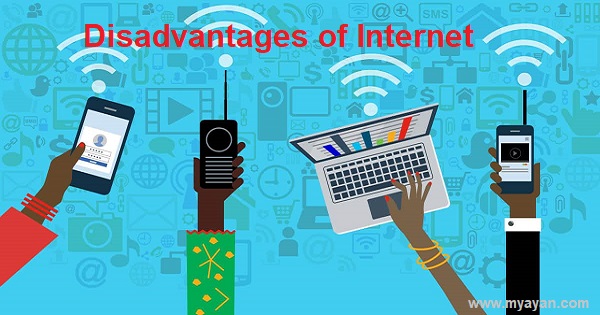 Is Internet Good or Bad?

Although the internet has transformed humankind by easing business and education sector processes, iNet has opened up countless opportunities for development and advancements. But are these advancements prodigal enough for the kids and the coming generations?

With billions of websites rendering bulk information, questions still spring out whether this data is reliable or not. Social media has brought distant worlds closer where people can express their concerns freely. On the other hand, the same platforms have raised more concerns for parents, individuals, and society. Many disadvantages of internet lurk around everyone who has been around connected with technological revolutions. As a concerned parent, a young mind, or an affected person already suffering from the dangers of internet, these are some points you need to be known to.

Most debated and undeniable disadvantages of internet

Apart from the business and corporate sector, social media and emailing systems haven’t been much of use to people’s personal use. As an individual, student, or a person seeking a relationship, internet media has led to several emotional and psychological effects known to have harsh consequences on people.

No wonder how many fake profiles exist on Facebook, Twitter, and Instagram, which still endanger people’s lives. Some recent studies revealed that Facebook recently acted stringently on 3 billion fake accounts. The biggest danger of social media is the impersonator may use your private information or credentials against you that may result in emotional or financial loss.

Some other incidents on social media have surfaced on like trolling, stalking, and hate speech, and bullying. There may be friends and families you are in touch with on social media, but there is also the danger of social media use and abuse and cyberbullying are the most common threats.

Internet users are addicted to chatting and games. This leads to procrastination and makes you spend your precious time on unimportant things. Your productivity goes down at the workplace if you are addicted to internet games or surfing. Human-to-human interaction is reducing these days considerably. Even when they are sitting next to each other, people will be checking their notifications on the phone.

These notifications divert your mind and cause a lack of concentration.

3. Negative Effects of Internet on Kids

Children are prone to addiction. They tend imitating whatever they see. Children always love cartoons, colorful games, Animals, Birds, etc. Remember! They learn what they see. Unsupervised use of the internet by children expose them to inappropriate content like violent crime scenes, abuse, or pornographic material on the internet.

Spending too much on computer surfing and gaming presents them to physical inactiveness and gradually it leads to obesity and other health issues. This is the biggest ill effects of internet on kids. Children may come across abusive words or can get into a bad company. So keep an eye on your phone after handing it over to your beloved kid. Children can become socially isolated by excess use of the internet.

4. Disadvantages of internet in student life

One of the major drawbacks of internet for the student is unemployment. The internet has undeniably created numerous employment opportunities for many talented individuals. However, it has also created a substantial amount of unemployment owing to outsourcing, downsizing.

Students can become addicted to the internet and may not focus on studies. Students waste time watching movies and videos online and may not concentrate during exams. This may result in poor academic performance. One of the most discussed problems is easily accessible pornographic content, which affects the mental health of students. Students suffer from depression by spending more time on the computer.

Be aware of the time you are spending over the internet. Use tools to track down the amount of time you are using the internet. Foreign cultures have Influenced students more profoundly. Foreign lifestyle and culture have made a greater impact on the youth.

With access to billions of websites and social media profiles, it is easier for impersonators to steal people’s identity. Twitter, Snapchat, and Instagram aren’t even safe from these harms. Computer hackers can break-in to your social media profile easily to steal your personal information that could be used for identity theft or extortion. You never know how popularity can cost you social media.

Internet is an excellent means to send your mails and messages instantly, no doubt. But have you considered how annoying these random spams can be? One of the drawbacks of using Internet is spams. You can't get it under control unless you pay for a personalized email service.

People take advantage of the Internet with spam messages. They sell data to other companies and making easy money. Due to this, people have already started misusing the Internet with spam messages and selling data to other companies, which in return – sends unwanted promotional offers that can fill up your email's inbox with spam. It prevents you from missing out the important emails.

The ads can be very annoying and very hard to avoid since most of the websites force you to fill in your email to use their products or services. So it's better to create a separate email so that it can be used only for signup purposes.

You never know when you fall prey to depression because of social media use. The obsession of presenting yourself perfectly in the digital world is so addictive, and if you stay disconnected from the real world, this leads to depression as you tend to compare your lives with others. The Internet and online games facilitate communication with others. Although you may find new connections around the world, you may also find yourself disconnecting from those in your real-life quite easily.

What are the dangers of using the Internet?

Cyberbullying is one of the most common dangers of the internet. Undesirables can access you on the internet easily and may harm you or the person you know. Other dangers of internet include trolling, hate speech, spreading fake news, stalking, and harassment.

How do you reduce the risks of using the Internet?

You can ensure internet safety by limiting your social media profiles to your known people only, using a strong password combination to avoid break-ins or hacking, using a password on your computer to ensure kids can't reach it, and lastly, using an anti-virus program to make sure your computer is safe from harmful sites and hackers.

Why the Internet is bad for your health?

According to health experts, as many as 10% of internet users are addicted to the internet. Many types of research found that overuse of internet leads to brain shrinkage up to 20 percent. Internet overuse is also linked to eye strain and bad posture, insomnia, and relationship stress.

Is the Internet a good or bad thing?

Internet is helpful in many ways for sure; Paying bills, conducting business processes, and easing day-to-day life. It is also an excellent means to stay connected to your friends and family. But the use of internet for money-making and spreading fake news has gone on the rise more recently. Unscrupulous elements often use internet to spread false information.