Advantages and Disadvantages of Digital Media 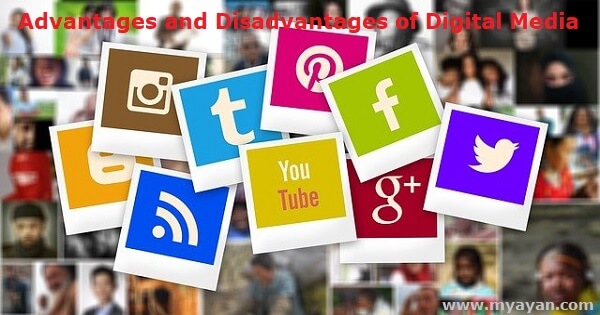 Digital media is a growing field, from hand-written letters to messenger apps; that's how digital media has shaped the human of this century. Now Digital media has an immense role in almost everything from business to personal life. Also known as electronic media, digital media has redefined how information is delivered and consumed through different forms. From education to entertainment, the advantages and disadvantages of Digital Media evaluate its pros and cons.

What are the Advantages of Digital Media?

As of January 2021, 4.6 billion people use the internet worldwide, while a quarter of internet users are on social media. Digital advertising revenue has increased by over 75% in the last two years. And an estimated 2 billion people will be using smartphones this year alone. The main reason for the success of digital media is it’s simple and easy to use. There are no complicated manuals or instructions to wade through when you have access to productive tools digitally.

1. Digital media is always up to date

Be it Digital News Media or online learning, what you see is up to date, whether for informational or educational purposes. One of the biggest Advantages of Digital Media is that there are no paper editions or daily deadlines. Instead, all news updates happen automatically, so you don't have to worry about missing a story if it doesn't come out on your day of purchase.

2. No need for physical copies

Whether you're commuting to work, sitting in the park, or just relaxing at home with friends and family after a long day of work. Digital media will never let you down. You'll always be able to find something familiar without having to search too hard—or wait until tomorrow when the library opens again.

Moreover, it takes less effort than reading from other platforms: With digital media, you can read the article without having to scroll or flick through pages, probably the best benefit of Digital Media.

You're not limited to what you find on the newsstands. There are no limits to digital media. You'll have access to all sorts of content from around the world without having to leave your house or worry about different languages.

No matter who you are, you deserve information that matters, be it academic or related to entertainment. With this type of format (not only for reading articles but also interacting), it's never been easier to get exactly what you need at any given moment.

It engages the viewers to think critically and debate topics as they read through text-based arguments and multimedia presentations found online rather than passively watching TV like most people probably one of the Advantages of Digital Media.

Textbooks or other printed media may not be that interactive or engaging over time, but you can certainly rely on digital media with constantly evolving creativity.

5. Creativity is one of the main advantages of Digital Media

Digital media is more than just instant gratification as it has many creative advantages. First, it encourages experimentation in creativity because there aren't rules like "this must always happen." This leads to innovation from users who figure out their own ways of doing something.

If you are about to launch your micro-business or planning for a startup, you will have to depend on digital marketing platforms to promote your business. That's where you'll require to bring in your creative approach and draw consumer's attention.

What are the Disadvantages of Digital Media?

Digital Media has unquestionably grown to become a part of everyone's life today. However, as with any technology that increases productivity and efficiency, there can also be drawbacks. Here are some Disadvantages of digital media affecting people in some way or another.

Digital devices are generally more costly than traditional ones, and some individuals may not have access to a computer or tablet. Furthermore, many people do not know how to use these technologies without assistance from someone else; this could create an accessibility issue for those who cannot afford classes on using the device in question.

Another disadvantage of digital media is that it doesn't last as long as paper-based content does. This mainly has to do with the fact that anyone can easily print out information from articles and other documents they find online by simply copying and pasting text into another document - which means once something becomes popular enough, all versions of it exist digitally while only one version still lives on paper.

3. Disconnected from the natural world

One of the disadvantages of digital media is that it can cause people to become disconnected from the natural world around them. When users are constantly plugged in and stare at a screen all day long, they lose touch with the real world. Digital screens also emit light, which is harmful to the eyes because of how close the device is usually held up against your face.

According to the FBI, 791,790 complaints registered were related to internet crime 2020. The annual report also estimated a loss of $4.2 billion due to Cybercrime. The downsides to using digital media are Cybercrime, physical damage, and privacy.

Cybercrimes include hacking into personal information such as passwords, bank details, and credit card numbers. With a few clicks of the mouse, hackers can take control over your identity online (e.g., social networks or email accounts), which in turn will ruin your finances or reputation.

The world of the internet is widened by Social media platforms. It’s not hard to find someone you know personally or professionally. Anyone can reach your Twitter and see what’s going on in your live feed.

The last one of the limitations of Digital Media is an invasion of privacy when you don't know what you're posting online because you might forget that anyone can see your content on social media photos, videos, messages, etc.

Conclusion on Pros and Cons of Digital Media

The future is bright for digital media; it has many benefits that will continue to contribute to the growth in this corporate industry and enhance lives as the world becomes more connected than ever before. With so many options, there's something out there for everyone. However, no matter how greatly it affects people at a business level, the Pros and Cons of Digital Media must be considered when it comes to its personal use.