Advantages and Disadvantages of Urban Farming 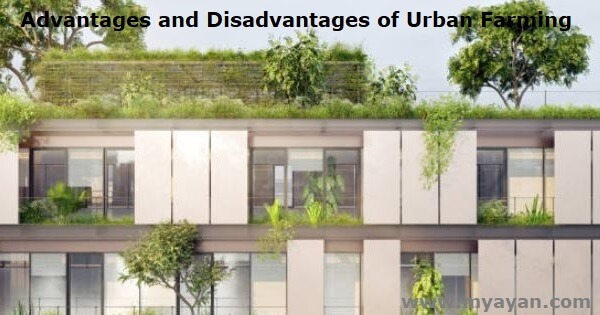 Urban Farming or Vertical Farming is the best solution to problems of land shortage. When you don’t have space to grow food on land, take your farm to the rooftop. With an amicable answer to climate concerns, rooftop farming is growing more popular in developed nations. The study evaluates the Advantages and Disadvantages of Urban Farming for countries in the nearing days.

Now you can grow Tomatoes, Zucchini, spinach, lettuce, and peppers in your rooftop garden, that too, without any technical. Urban agriculture is a perfect solution to problems of food that may arise in countries like Singapore or Hong Kong in the future. However, urban agriculture is not just limited to cities with skyscrapers. It can be practiced provided you have a rooftop and have a knack for gardening.

The global population is one of the major concerns for every nation. In 2008, the number of global city dwellers exceeded their rural counterparts. The UN predicts that the number is predicted to grow by over a million between 2010 and 2025.

The world would have to face issues like food and land shortage due to exploding population and shrinking space. So taking to urban culture is one good thing to start and reap most of what the nations have with continuing urbanization.

What are the advantages of Urban Farming?

According to a study in 2017, imported food accounted for 99% of the total food supply in Hong Kong. Nations like gulf countries and Singapore can contribute to food production to tackle future shortages. However, the contribution seems quite small, but it’s the easiest way to curb the food insecurity problems to some extent.

2. Healthy Food is one of notable advantages of Urban Farming

City dwellers no longer have to live an instant-noodle lifestyle. Instead, they can eat fresh and healthy food grown locally. The urban farming culture emphasizes growing food organically without making use of chemicals such as fertilizers and pesticides.

Locally grown food also retains freshness vital nutrients as it doesn‘t take long to reach the market from the local farms and eventually, to your plate.

Urban farming also aims to maintain and support biodiversity, improve air quality, and reduce the heating effect. In addition, reduced or no use of herbicides and pesticides also keeps the environment healthy.

Several studies revealed that urban farming is associated with improved neighborhoods and reduced crime rates. There is no good way than farming to bring people close. Urban agriculture encourages people from different backgrounds to participate and strengthen social ties. As people unite for a cause, they develop innovative visions to make the farming practice more sustainable.

What is more important about urban farming is the practice keeps the level of unity and commitment united. The social factor plays a vital role at times of making decisions and acting in exceptional circumstances. Many also believe that tilling the soil with hands is a relaxing activity and promotes mental health.

Cities are full of schools, colleges, companies heeding to environmental concerns. When people are educated about sustainable solutions, they can utilize their skills in the right direction. Provided many countries have turned to vertical farming, programs and projects associated with urban agriculture will help create more jobs and enhance the skills of professionals.

Encouraging participation in sustainable agriculture will be helpful in the development of important skills that many may use in the future to generate income. In addition, the knowledge professionals acquire today will be better used for future planning.

What are the Disadvantages of Urban Farming?

Even though the city-dwellers can reap maximum benefits of vertical farming, there is an expense to consider. Like everything, the pros and cons and urban agriculture are no different. However, there are a lot of challenges concerning urban agriculture practices and potential problems causing problems. The main disadvantages of urban farming are listed below.

There are many challenges urban farming is going to face, and one of them is controlling food scarcity. The UN has reported that 55% of the global population lives in urban areas speculated to grow by 68% by 2050.

According to the researchers from Sheffield University, food grown locally through urban agriculture can only feed 15% of the population. With the number of consumers growing, the problems with urban farming would be major roadblocks in the journey as there are limited urban farmers and less space to practice this method.

2. Contamination is one of concerning disadvantages of urban farming

Most metropolitan cities have poor air quality, which has frequent issues with clean water supply. Urban Farmers have fewer water resources which mean, they have to manage water supply from other sources. Finding reliable and safe water is more challenging when the city departments already deal with the population’s needs.

Water from sources other than rain may pollute the urban farms easily, leading to waterborne diseases. The chemical and bacterial contamination of water sources may also lead to severe health issues. Let’s not forget that cities are major producers of garbage and sewage. Finding contamination-free soil in urban areas is also one of the biggest challenges of urban farming.

3. There are always space-related problems with urban Farming

Metro cities are often condemned for lack of space. Unfortunately, not every building is designed for urban farming with wider rooftops. Finding a perfect location in densely populated cities is one of the common limitations of urban farming.

Even though the cities have skyscrapers, only a few can be used for agricultural use. Cost and planning come as common challenges for builders and engineers if they plan to construct one.

Even if you manage to find perfect space, the system setup and maintenance may bring cost disadvantages to urban farming. The system setup requires expertise and regular maintenance. The plants are grown under controlled conditions using mechanical and electrical supports. A small glitch and the crops will damage. The failures and other natural challenges may outsize the profits.

Cities seldom have healthy soil for farming, which means you‘ll have to ship it from somewhere else. As a farmer, you’d likely prefer buying rich soil to provide adequate nutrition to the plants and produce high yields. However, given the initial setup costs, it can be sturdy.

In addition, water shortage is often a big issue in metro cities. If a proportion of water is supplied for farming, populations may sometimes have to deal with water shortage issues. However, this issue can be sorted through rainwater harvesting, drip irrigation, and wastewater management.

Quick thoughts on Pros and Cons of Urban Farming

One of the greatest lessons the world can learn from Urban Farming is appreciating the value of food. Cities are the major producers of food waste. Understanding the pros and cons of urban farming, a few things are clear. First, this method is highly effective, and most of its problems can be solved with the better use of technology.

Why is urban farming important?

Sustainable agricultural methods, such as urban agriculture, increase access to healthy, affordable, and fresh food while also allowing people to learn about nutrition and farming. In addition, it encourages individuals to become more aware of where their food comes from, how it's produced, and the people who produce it.

What are the advantages of urban farming?

What are the negatives of urban agriculture?

The main reasons for the ban on urban farming are soil erosion and chemical pollution of soil and water caused by chemical and pesticide use in agricultural production.

Is urban farming bad for the environment?

Noise, smells, and water run-off are all possible consequences of urban agriculture. In addition, it may be energy-intensive, cause food-safety concerns, and be unappealing in appearance. In terms of the environment, there are some inherent disadvantages to urban farming. For example, cities can't produce big crops in any practical manner because of space limitations.