Advantages and Disadvantages of Smart Cities

The concept of Smart Cities quickly shifts one’s attention to better healthcare, Living standard, smart energy use, and advanced technology. The benefits of living in Smart Cities are like having a dream come true. Homes equipped with advanced monitoring and security systems ensure that you will never feel as safe as now. However, some limitations and lack of ability to mix different technological methods make smart cities just a dream for many nations. The advantages and disadvantages of smart cities take a look at both sides.

What are smart cities exactly?

A city equipped with essential infrastructure where people can live sustainably in a clean environment making efficient use of technology and available resources. The concept generally emphasizes offering the population much-sought convenience brought through digital transformation, where business and personal lives are easy to lead.

Enhanced mobility, smarter healthcare services, smart homes & office security, clean & environment are all that a smart city can offer. All in all, it’s creating a better place for all the residents. All or most of the functions of a smart city are transformed through digital technology.

What are the Advantages of Smart Cities?

Smart cities bring many benefits to the table both practically and economically. The world has already started switching to Hybrid Workplaces and Smart homes making the most of what’s available in an efficient way. It’s hard to overlook the advantages of smart cities when society’s needs are considered first.

Since smart cities are technology-driven, most decision-making ability comes from data collected and trends observed in society. As the consumer market, Big Data and analytics would be an effective tool to monitor and cater to the city’s needs.

Officials will be able to derive accurate conclusions identifying risk factors and critical areas to develop. They will also be able to forecast and expand the cities as per received information. Factors such as interests, concerns, and needs of the citizens will be the key contributors to the research.

Smart cities mean smart technology that doesn’t amount to degradation or detriment of the environment. For example, smart cities foresee a change in the modes of transportation through electric cars, flying cars, and vehicles that would run on Hydrogen energy.

The internet-enabled transport network will be connected, resulting in fewer traffic issues that today’s cities have to deal with. From better traffic management to tracking vehicular movement, innovative technology will help cities to serve citizens better.

With advanced equipment and monitoring systems put to work in this age of modernization, it would be possible to tame criminal activities. As parks, streets, and homes are equipped with sensors, CCTV cameras, and speech recognition systems, citizens, would be safer than before.

The Police would have the most advantages of the smart cities in tracking the criminals and finding the missing ones. Recognizing License plates, tracking the vehicular location, and even putting instant lie detector tests would undoubtedly avoid mishaps from occurring.

4. Sustainability is one of the major advantages of Smart Cities

The world is running short of energy sources, most of which are non-renewable. Humans depend on gasoline, Diesel, Coal, and Natural Gas for everyday tasks. Innovative technology hopes to bring sustainable solutions that could lead society to less wastage of such limited resources.

The electricity produced today through coal will be generated through Solar Energy, Wind Energy, and hydroelectric plants. This would not only be safer for humans but also economical.

Smart cities don’t just limit to the internet of things; the concept also implies energy-efficient infrastructure, improving air quality, and making proper use of the available resources in the best way.

It may be possible that cities won’t need to depend on Air Conditioners. Smart architecture would be enough to create a ventilation system using natural wind. Provided gasoline cars will be replaced by Hydrogen fuel cars or their electric counterparts, natural cooling systems in smart cities will also bring a drastic improvement to the environment.

What are the Disadvantages of smart cities?

The pros of smart cities come to their cons that can’t be overlooked. A hi-tech system does require advanced-level management and maintenance protocol. What is projected as the possible benefits today can turn into problematic disadvantages of smart cities tomorrow.

It starts from homes where you may suffer from a lack of privacy. The use of security cameras and smart systems sounds too risky when you have in mind the entire city is wired through the network.

With the interconnected systems, hackers can break into your home network and dig into your private life. Also, smart systems connected through all different places make it more difficult to maintain anonymity.

With government officials accessing public information, the data gathered is prone to misuse for personal or political interests. Someone behind the database has to have access to all the mountainous information and, therefore, has the authority to misuse the data to manipulate the public.

Corrupt politicians and influential authorities may use Digital Media to manipulate public opinion for their interests. Even a flyspeck of an error could also lead to mismanaged information. The worst-case scenario is if the data somehow slips into the wrong hands, it could compromise the entire city’s security.

3. Dependency on the Internet

Too much dependency on the internet means less dependency on conventional ways, whether businesses or social activities. Every system has loopholes, and when there are a majority of people depending on technology, a minor glitch would be enough to penetrate the system or falter it.

A small or momentary fault would hamper the lives of many in different sorts such as transit, office or home safety, and interrupted business activities. These outcomes may be termed as among the gravest disadvantages of a Smart city.

4. With technology getting smarter, Man will get dumber

Humans would depend more on technology to carry out their daily tasks rather than using their skills and brain. For the next generations, the view would be a whole lot different from what it’s right now.

Kids would not be familiar with books but will be well-versed with apps and online learning material. They wouldn’t know the importance of writing and using conventional learning systems such as Abacus. The automated systems would make the generations use less of their practical skills.

Today, electricity is produced through Solar energy, Coal, Dams, Wind Energy, and Nuclear Energy. These sources will have to be ramped up to fulfil the electricity needs of smart cities. Most of the equipment, such as sensors, are battery operated.

The IoT system would require more power to operate when it comes to parks, streets, and homes. The government has to find out more efficient ways to keep the electric supply adequate to run the system. Also, even if governments can ramp up electricity production, energy consumption would likely increase at a staggering rate.

Conclusion on Pros and Cons of Smart Cities

The world is expanding every day, and smart cities are an efficient way to make use of the available resources. With better technology, the spaces around cities would also grow and flourish. However, the Pros and Cons of Smart Cities clearly indicate the key areas where this concept outpaces the problems and at what point these solutions turn into problems. 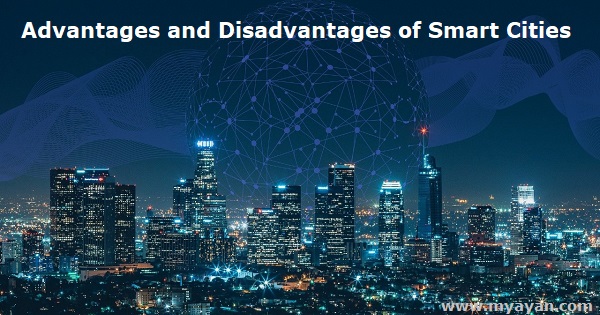 What are the advantages of smart cities?

As a result of the increasing need to integrate all service infrastructures in urban areas into a shared network, more and more cities are turning to smart technologies. In this way, IT can be used at the city level to improve efficiency and security while saving costs. At the same time, it is possible to make citizens participative by giving them direct access to information about the services provided by their local authorities.

What are the opportunities of smart city?

What are the issues problems that smart city wants to solve?

Even though we are in a period of harsh economic reality, smart cities' prospects look bright as local governments turn to smart city initiatives to address social challenges such as healthcare, road infrastructure, public transportation, security, migration and education.

What are the problems of smart cities?

Although using these technologies may appear to be convenient for local authorities, it could prove to be counterproductive in the long run. Indeed, the fact that cities become more smart with technology also increases their level of vulnerability. Therefore if security standards are not implemented, they can become easy targets for hackers and terrorist attacks.

How do smart cities affect the economy?

The inflow of human talent, attracted by the safer, happier environment of the smart city, increases GDP and the overall economy. Moreover, a Sustained Ecosystem That Is More Resilient to Natural Disasters and Addresses Climate Change Results in Higher Standards of Living, Increased Happiness, And Economic Growth.