Advantages and Disadvantages of Tidal Energy

Harnessing Tidal energy or Ocean Energy is not a new concept. It began in Europe over 1000 years ago when people harnessed the movement of water to operate grain mills. However, there are many places in America where most of the energy needs can be met through Tidal Energy. Alaskan and Maine's regions are to start. The Sihwa Lake tidal power plant in South Korea is the biggest tidal power with a capacity of 254 MW. Tidal energy is the cleanest ever source but is it enough to power an entire nation? The Advantages and Disadvantages of Tidal Energy throw some light on the pros and cons.

A Little about Tidal Energy

The earth's rotation and the gravitational pull from the moon and sun cause the ocean water to rise and fall, which is harnessed in the form of tidal energy using tidal energy generators. As per global research, better use of renewable energy sources is becoming less dependent on fossil fuel.

Sea waves create energy during low and high tides. The rise and fall of ocean tides can convert it into a usable form, and mainly this kinetic energy is converted to electrical power.

Although the world's energy proportion is still coming from non-renewable energy sources due to the limited resources, nations need to reap maximum advantages of Tidal energy with the right technology.

What are the Advantages of Tidal Energy?

Being a clean energy resource, tidal energy also has a huge potential that needs to be harnessed. The fossils are limited and will expire one day, making use of renewable energy sources a need for the future. The current situation utilizes renewable forms to a lesser extent as energy consumption increases every day. Following are the advantages of Tidal Energy predicted by the world of researchers and experts.

Next to Solar and Wind Energy, it is the cleanest form of energy which means it doesn't create any pollution during its use and production. This form of renewable is available without any chance of getting exhausted. There is an enormous amount of tidal energy available around the globe, and only a limited amount of it is harnessed up to this point.

The gravitational pulls and rotation create regular waves in the form of high and low tides. Like hydropower, waves' potential and kinetic energy is utilised to move the turbines, producing electricity. It is never going to exhaust, and we can use it to create an enormous amount of energy capable of providing power to a large population.

The rise and fall of tides can be predicted using weather equipment, making it a highly predictable resource. These predictions can be utilized to judge the behaviour of ocean and sea tides, and hence the power generators can be placed at high potential points.

4. Zero Operational Cost is one of the notable advantages of Tidal Energy

Once the machinery is installed at a given point, the machine starts producing output without the need for any kind of input. The tides are free of cost, and there is no investment needed to create them. These are generated naturally, and harnessing them doesn't take any extra input cost.

The amount of energy produced using thermal power stations and other non-renewable resources like nuclear energy is relatively high. The non-renewable forms of energy can reduce dependency on conventional sources of energy and the environmental impacts of pollution created by them.

What are the Disadvantages of Tidal Energy?

The use of this energy has increased gradually worldwide, and many tidal power plants are slowly on the rise. Although tidal energy has numerous benefits, its low utilization has reasons because of which it still has a lower proportion in world energy production. Here is a list of few limitations of tidal energy.

The cost incurred during the construction and installation of the tidal power plant is very high compared to the output generated. There is a timely formation of waves that can be utilized, and apart from that, the generators remain idle, creating a gap between energy production. The machines needed for installing the plant takes high investment before it starts giving output.

The ocean and marine life lives in water and moves along the waves, making them fall on turbines and generators. This is an unavoidable phenomenon that results in continuous damage to marine life. A large amount of the marine population can get destroyed due to tidal energy power generation.

The generation of tidal energy is limited to oceans and seas, and that too at limited points where the potential is enough to benefit from the resource. This makes this form a limited type for which research needs to be done before installing the electricity generating plants at proper locations.

The wave energy is not continuous as it is not formed through the day or year. It all happens naturally, as much depends on weather conditions. Calm weather is one of the main disadvantages of Tidal Energy. There are times when the actual generation takes place, and there is zero power generation at other times. Unlike hydroelectricity which generates continuous power, this cannot be controlled or made persistent by infrastructure developments.

The waste and marine life obstruct the machine from working as it moves along the water. As a result, they fall on the generators causing damage to it. This increases the maintenance and replacement costs for the power generating units. The obstructions to avoid this will eventually result in kinetic energy loss and can only be avoided to a limited extent.

Conclusion on Pros and Cons of Tidal Energy

The overall benefits of tidal energy as a renewable and unlimited source outweigh its limitations. The environmentalists emphasize developing ways to minimize the burden on nature by innovating techniques that do not harm the environment. Tidal energy is one of the resources that can be harnessed for future requirements and power generation methods. 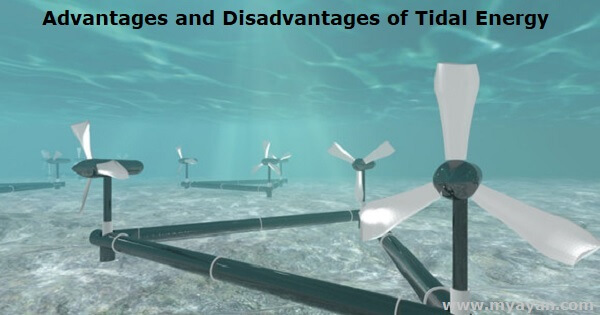 What is tidal energy in simple words?

Tidal power is derived from ocean tides and currents' natural rise and fall. Turbines and paddles are two technologies that contribute to this sector. Ocean surge drives tidal energy production, which occurs during the height and fall of tides.

How does tidal renewable energy work?

A tidal energy device, in simple language, is like a wind turbine but with blades that spin 12-to-18 times per minute depending on the tide's strength. The turbine is linked to a gearbox that drives a generator and produces electricity.

What are the negative effects of tidal energy?

Tidal power may harm aquatic life by causing the deaths of living animals in the sea. The noise from the turbines' rotation can also disrupt fish settlements in tidal power regions. In addition, tidal energy can influence water and sediment processes, which can be detrimental to their quality.

What are the disadvantages of wave and tidal energy?

One of the most significant drawbacks of tidal power is its expensive up-front costs. Because water has a much greater density than wind, tidal energy turbines need to be considerably more robust than wind turbines. As a result, the expense of creating a tidal power generation facility varies based on the type of technology used.